Copley kills it with bloodbath that is ‘Hardcore Henry’

As with cinema, the aesthetic of the modern video game has since drastically altered.

The “Goldeneye 64” first-person shooter has now become the norm with such properties as “Call of Duty” and “Halo” emulating the very same effect.

Suddenly, we allow ourselves to become the protagonists in our very own living rooms; we decide every action our characters make.

Something about being in charge of your own fate is an exciting prospect; it was only a matter of time before somebody brought this to life on the big screen. With that said, I present “Hardcore Henry,” the ultimate definition of the video game movie.

A man named Henry wakes up from his slumber to discover that he’s been in a tragic accident, prompting his wife Estelle [Haley Bennett] to nurse him back to health. In the process, Henry quickly realizes that he’s now a half-man-half-machine hybrid with special abilities. Without warning, a telekinetic business tycoon named Akan [Danila Kozlovsky] raids the laboratory, kidnapping his wife in the process. In order to get her back, Henry must confide in a mysterious man named Jimmy [Sharlto Copley]. Once equipped with nearly every weapon on the face of the planet, Henry embarks on a blood-soaked revenge path to rescue the woman he loves and to prevent Akan’s army from coming to fruition.

Last night, I sat in my theater seat pondering whether or not a barrage of 90-minute action sequences would remain consistently entertaining or wear off after a while.

Needless to say,there wasn’t one single second that “Hardcore Henry” did not have my undivided attention.

Is “Hardcore Henry” a good film? No, but I’ll be damned if it isn’t one of the most entertaining theater experiences since “Mad Max: Fury Road.” Nothing makes any sense; things just transpire for no reason because logic is a meaningless term in this universe.

It’s like trying to argue with a child: the child is most likely wrong, but what do you gain from telling him? Just let him believe whatever the hell he wants, insanity and all.

Just when you thought that “Fury Road” was our only glimpse of pure mayhem and chaos, here comes one of the craziest action film ever conceived.

Witnessed from a first-person perspective, the audience becomes the character. Throughout the film, Henry cannot speak, and his appearance is left a mystery. It would be immensely difficult to judge this film based on its characterization, because there isn’t any.

The main protagonist is nothing more than a vehicle for the audience to take advantage of.

Everybody Henry encounters along his blood-drenched killing spree is an expository tool to get him to the next frenetic action sequence, just like a video game.

The only true “character” is played by Sharlto Copley, and believe me when I say that his performance alone is one of the strangest sights you’ll see for quite a while. He’s so over-the-top that his actions reduced me to tears of laughter; it’s something you have to see to believe!

If that weren’t enough, the main gimmick of the film lends itself to some of the craziest stuntwork, which makes you scratch your head, pondering how in the hell they accomplished what they did, especially since they’re working with a small budget of $10 million.

The action takes off within the first five minutes, not giving the audience a chance to breathe before they immediately capture a realistic effect of freefalling. As Henry falls from buildings to an airplane, so does your stomach.

Rivaling the 2013 “Evil Dead” remake on the gore factor, every sequence in this blazing shoot-em-up is sure to wow even the most jaded filmgoer; although, it was clear from the opening sequence that this film is catered to a specific audience.

Many will be put off right away by the near pornographic, grotesque dismemberment of human flesh.

But if you’re someone like myself, who grew up on exploitative action films of the 80s and 90s, then this might be right up your alley. The moment Queen’s “Don’t Stop Me Now” starts kicking on the rock ‘n roll soundtrack, it’s near impossible not to cheer.

You know who you are.

From an Indiegogo campaign to the big screen, “Hardcore Henry” is a big, dumb, bloody cartoon of non-stop pandemonium, which proves that boundaries were meant to be pushed in incredibly dumb directions.

0Shares
0 0
instagram as an art form Previous
WKNH and Campus Ecology are collaborating for upcoming... Next 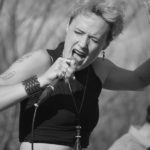