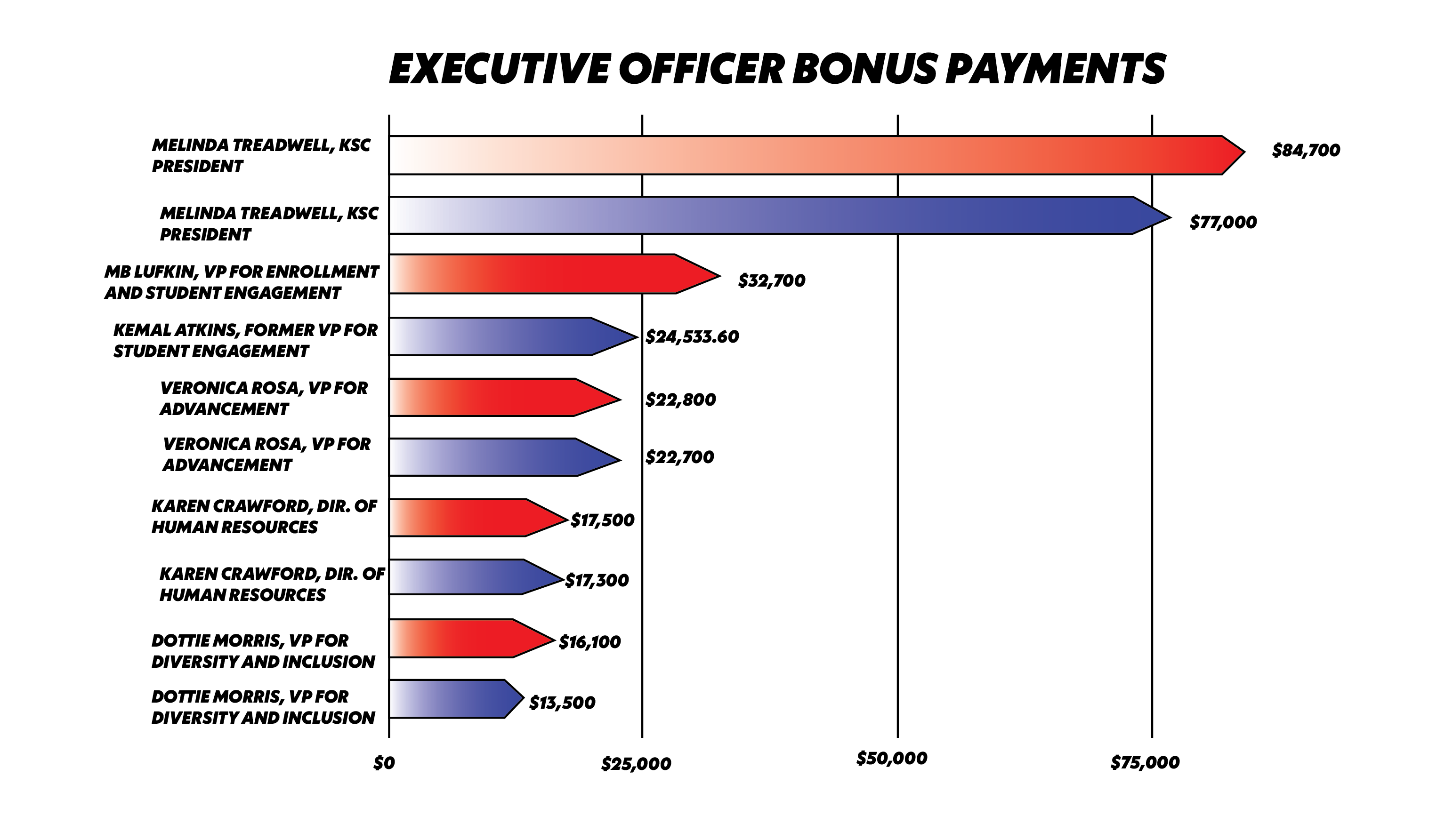 Keene State College (KSC) faculty, staff and administration received over $800,000 in bonuses since the summer of 2020 under three different categories.

KSC’s executive officers receive “bonuses” under what’s referred to as the “pay at-risk program,” a system in which the University System of New Hampshire’s (USNH) executive officers’ base pay plus bonus pay is equal to 50-65% of market pay.

KSC President Melinda Treadwell explained that KSC’s market pay is less than the markets of Plymouth State University and University of New Hampshire due to their location of the colleges, as well as the fact that the schools are universities, not colleges.

Executive officers’ at-risk pay, with the exception of herself, are decided by KSC President Melinda Treadwell.

“Every July-August-September timeframe, we set goals for the upcoming year. We look back at the previous year about how we did. I make a mathematical calculation based on each goal and what percentage people completed,” Treadwell said.

“There’s an annual performance goal setting that I do in July or August about what I’ll do the next year. And it has specific measurements as well as kind of general projects…then we meet in the fall for the previous year and do a review,” Treadwell said.

Treadwell explained that this is because Lufkin’s former position as VP for Enrollment was combined with the position of VP for Student Engagement, a position previously held by Kemal Atkins, who left the college in August 2020 when the college cut six administrative positions.

Executive officers also give back 8-14% of their base salaries to the college for scholarships.

“It goes directly to the KSC Promise Scholarship, which was used directly for student scholarships. It didn’t go to the endowment, it went to scholarships, direct aid. So it went immediately into I think they call it the cabinet emergency relief scholarship fund,” Treadwell said.

Along with executive at-risk payments, since fall 2020, KSC has given out a total of $197,377.59 in COVID-19-related stipends and bonus payments for faculty and staff that helped mitigate the college’s efforts during the COVID-19 pandemic.

For example, KSC’s contact tracing team consisted of four lead investigators in the spring of 2021. That semester, the four investigators combined received a total of $40,200 in bonus payments.

KSC has a policy in regards to bonus payments given out to faculty and staff.

“We can give bonuses, we give those out, when people do unbelievable things beyond their base [pay]. We also had people who were stipend recipients in our faculty, and some staff get overload or supplemental pay to recognize work above and beyond their primary appointment,” Treadwell said.

According to the requested record of the bonus payments, “in some instances, portions of those pandemic-related awards were reimbursed through federal relief funds tied to the health crisis.”

The third category of bonuses is for additional responsibilities and performance-based bonuses.

109 of these bonuses were given out between fall 2020 and summer 2021, totaling $300,144.48, which reached areas of campus including departments such as Community Living, Marketing and Communications and the Behavioral Health Improvement Institute.

“The overload pay is kind of like at-risk pay. It’s based on a flat rate per credit, usually, rather than a percentage performance against goal. So it’s all kind of similar in our goals for faculty and staff is that faculty and staff are at 50% of market, so we set their base pay. Our goal is to be at the midpoint of our market for the staff and the faculty by position classification type. So it’s all consistent,” Treadwell said.