Student Government Advisor Jen Ferrell reminded the student government of the town hall meeting with President Treadwell on October 21 at 6 p.m. Ferrell said that the president will talk about the upcoming spring semester as well as about how to make the last few weeks of this semester strong.

Student Body president Davis Bernstein asked the student leaders to sign up for hours to organize Pumpkin Palooza on Saturday. He said specific roles will be assigned through the Facebook page. He also updated the government that there will be no assembly on the day of elections on November 3. He asked the leaders to vote instead.

Treasurer of the Student Assembly Jack Hanson joined the assembly through the Zoom meeting and informed the student leaders about the approved budgets of different student clubs.

Further, different classes reported different booths and events they are putting up on the day of Pumpkin Palooza. 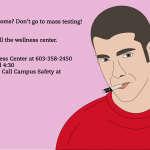