Keene State College junior triple-jumper Benjamin Musese qualified for NCAA DIII Men’s and Women’s Indoor Track and Field Championships on March 8, 2020. According to head coach of the cross country and track and field teams Paige Mills, “To qualify, they take the top 20 best jumps nationwide for division III.” She added, “[Musese] is sitting at the number 13 [jump], I believe.”

Musese is majoring in sustainable product design and innovation (SPDI) and is also part of KSC’s men’s soccer team.

The championships were scheduled to take place on March 13 and 14 at the JDL Fast Track in Winston-Salem, North Carolina. Musese was ready and hyped up.

“It is my first time for indoor qualification,” said Musese.

However, on March 12, the NCAA released a statement announcing that the Indoor Track and Field Championship, along with all other winter and spring championships, would be canceled due to the COVID-19 pandemic.

Musese transferred to KSC in the fall of 2019 from the University of Southern Maine. Musese had qualified for the NCAA DIII Outdoor Track and Field Championship before; however, it was his first time qualifying for indoor.

According to Musese, he placed seventh in the nationals for outdoors.

Mills said that they were hoping for Musese to get in the top eight. According to Mills, the top eight are All-American Honors. Musese shared that his hope for nationals was to come in either first or second place.

According to the assistant track and field coach, Jared Hannon, “[Musese is] very committed to staying on his training program, one of the things that has led to his success.”

Mills said that he set his qualifying jump at the New England Division III Indoor Track and Field Championships at Springfield College. “The jump that qualified him for nationals was 14.57 meters,” she added.

Musese was really proud of himself for making it to nationals without having an indoor jumps pit to jump in, according to Mills.

Musese said, “[It] doesn’t matter. Just because you have a track doesn’t mean you’re good.”

After the NCAA announced they would be canceling the championships, Benjamin Musese and Paige Mills were both reached out to for comments. Musese declined to comment while Mills did not respond to the request. 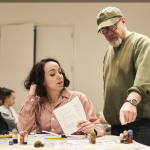