She insisted Casey Anthony take her to her granddaughter immediately. After minutes of Casey Anthony driving around in circles, she began to break down and cry, confessing that her daughter had been missing for thirty one days. Cindy Anthony then called 911 and reported Caylee Anthony as missing in July  2008.

Casey Anthony had later been a suspect in the loss of her daughter, and was accused of first-degree murder, aggravated child abuse, and aggravated manslaughter of a child. The trial lasted six weeks, where she was deemed not guilty and is now using the Peacock platform as a way to let people hear her side of the story for the first time, years after her daughter’s death.

I don’t believe that filmmakers should be continuing to make docuseries for criminal cases. Many docuseries have been made for multiple murder cases over the last few years. Every time one of these productions is made, the people who were affected by the acts and events of the crimes are reminded again. This docuseries, and docuseries alike, are digging up old news and trauma to the people who were involved.

Since Casey Anthony was deemed not guilty back in July 2011, I feel like her speaking out nine years later isn’t necessary. I understand that she wants to voice what had happened in her eyes without a judge or attorney being around her, but if she’s already not guilty, she should drop the whole situation completely.

That case was probably very difficult for her to go through as she was pleading not guilty while the whole world thought she was guilty. She shouldn’t have to convince the rest of the world she was innocent if the judges already said she was.

“Dahmer Monster: The Jeffrey Dahmer Story” also experienced negative backlash as it was filmed as an entertaining movie rather than an educational documentary. Once the series gained popularity, people started dressing up as Dahmer for Halloween and posting videos on Tiktok, glamorizing the killer and dehumanizing the victims.

These productions take these real events involving the families and killers, and revamp them into a form of entertainment for the people. These crimes should not be looked at as a fun thing to watch with your friends and family. These creators are making a profit off of exploiting the victims and their families. It doesn’t matter if the defendant is guilty or innocent, the death of these people still happened and should only be looked at as mortifying.

Reilly Sanborn can be contacted
at rsanborn@kscequinox.com 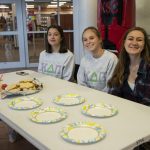