Woitowitz and Stimson performed their compositions and also brought in friends and music department colleagues to join them on stage.

Included in the program was “Koi Pond,” the first piece Woitowitz ever wrote. They said “Koi Pond” marked a turning point in their journey with music composition.

“This piece made me believe that I was able to write good music and be proud of it,” Woitowitz wrote in the program notes.

Some of Woitowitz’s more recent compositions from the last two years were also featured in the program. Woitowitz said this range will showcase their growth and evolution as a composer.

“People are going to see what I first wrote as a little baby composer and then to the pieces that I wrote last semester… what I went from to where I got to now,” Woitowitz said.

Also in Woitowitz’s portion of the program was “Tranquil,” a piece performed solo on piano by KSC professor of music Pablo Gorin. In alignment with the piece’s title, Woitowitz said composing “Tranquil” brought them a sense of calm in the midst of the stress that comes with being a senior.

“It actually brought me some peace to my stressful year as a senior and all the craziness of graduating and stress of performances and stuff. And while writing this piece, it gave me some inner peace,” Woitowitz said.

Other original compositions from Woitowitz included a solo piano piece titled “Something Different,” a flute and piano duet titled “Serene” and “Stress,” which was composed using only electronic sounds.

Four of Stimson’s original compositions were featured in the recital. His 2021 composition “Finding Peace” opened the performance, with Gorin on piano and live electronics from Stimson. The electronics are a mix of bird calls taken from Youtube, as well as sounds Stimson recorded himself from around Keene, including rain samples and wind chimes.

According to the program notes, “Finding Peace” came out of a period of musical writers’ block for Stimson. “I found myself struggling for musical inspiration for half of the semester, trying to start a few different projects… Seven weeks passed, and I still had nothing. I was stressed and at my breaking point during this semester, and I realized I needed something to change,” the program notes stated.

The notes continued, “…this piece was a way for me to experience a sort of peace that I had been struggling to find, creating it for myself versus waiting for it [to] come to me.”

Two of Stimson’s pieces, “I Need A Break” and “Snap, Crackle, Pop,” stem from the jazz genre. Each of these pieces were performed as a quintet, including Stimson and four of his classmates.

Stimson noted these pieces as standouts from his selections, citing his experience with the jazz genre while growing up. “That’s kind of what I, through middle school and high school, my musical experience was more centered around,” Stimson said. “It’s always kind of had a special place in my heart, that kind of music.”

Stimson said the recital serves as a final reflection of the work that himself and Woitowitz have produced over their four years at KSC.

“I equate it to a capstone kind of moment,” Stimson said. “[It] is kind of a reflection of, musically and personally, for me and for Lex, I would say, the journey we’ve grown since we came into these walls four years ago.” 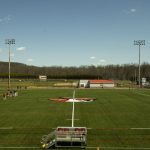