Improv Club is making its return to KSC.

President Cailees O’Neill described what made her want to give KSC an improv group again, “It started at the club fair, when I saw that there weren’t really any theater clubs. I heard about the fact that they had an improv club at one point and I kinda just wanted to start it up again.”

To make O’Neill’s idea come true, she had to go through a lengthy process. “I had to contact Student Involvement and tell them I wanted to start a club,” O’Neill said. “They helped me from there [and] I had to write a constitution, which was fun.”

In terms of planning, O’Neill said she wants the club to be a fun outlet for those that decide to attend the meetings. “I don’t really have goals, just for people to have fun,” O’Neill said. “Playing fun games is about it.”

Since the club is in its beginning stages, a lot of details are being worked out. At the moment, O’Neill is unsure of exactly when the club will meet. “I don’t know when and where the meetings will be, but [they] will most likely be on Fridays,” O’Neill said. “Later in the day, at [around] five.”

O’Neill is currently working on advertisements for the club and reaching out to students on campus. “I’ve been asking around and probably [will start making] flyers,” O’Neill said.

Once the club gains traction, O’Neill said the club will hold elections for an e-board. “Getting [an e-board] is the plan once I have more people, so it’s more fair,” she said.

For anyone interested in the Improv Club or running for e-board, reach out to O’Neill at Cailees.ONeill@keene.edu. 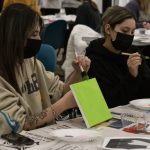 Painting with a purpose Previous
Movie Review: “Zombieland” (2009) Next