Where Dance and Film Collide

Motion State Arts, co-produced by Ali Kenner Brodsky and Andy Russ, began their annual film festivals in 2018. The company travels throughout New England, and according to their website, are “devoted to showcasing the diversity of contemporary creative voices exploring the medium of choreography for the camera.”

According to Kenner Brodsky, the company was originally called “Kicking and Screening,” and began with a collection of her and Russ’ films, along with some films directed by their friends. “We had a showing at the Jamestown Art Center [in Rhode Island],” Kenner Brodsky said. “It went over so well that we said, ‘Oh, there’s other people that want this.’”

Kenner Brodsky and Russ were also inspired to create a dance festival.

According to their website, The Motion State Dance Festival, “is a movement-based performance festival designed to introduce Rhode Island audiences to the latest in contemporary dance and dance film.” The company’s second dance festival is going to be taking place this March.

Also in March, the team opens submissions for dance films. “We open submissions in March and we close submissions in August,” Kenner Brodsky said. “Then Andy and I watch all the films… and have our first screening sometime in September.”

The screening shown at KSC is the company’s fourth season of the dance film series. The screening opened up with “finding us again// again” directed by David Comeaux and choreographed by Ieva Bračiulytė. It featured two women on a rainy beach, embracing and re-embracing each other through dance.

“There’s just something in that film when I first saw it, it was so sweet and the relationship between the two women was so pure and honest,” Kenner Brodsky said. “But yet uplifting at the same time with beautiful surroundings.”

The color choice for this film is one example of what the team looks for with submissions. Russ mentioned that they steer away from monochrome and favor more diverse and complementary colors. “We’re looking for colors that go together and seem to resonate with each other,” Russ said. “Colors that speak to each other in a way that we feel is interesting.”

Another dance film featured in the screening is titled, “Salty Dog,” which was choreographed and performed by Jessica Stegall. The film featured a woman dancing while her partner sang and played her song, “Salty Dog,” on the guitar. “That really spoke to me on a different level,” Kenner Brodsky said. “Just the intimacy and her partner’s voice, that was just so captivating.”

Genevieve Shultz’s “Relay” featured singer Fiona Apple’s song “Relay.” The dance film itself featured a girl with a free-spirit that sparked a vibrant energy within the screening. “Who hasn’t felt like that… you know, kind of let your hair down and just viscerally go for it,” Kenner Brodsky said.

The team believes that the genre of dance film itself is unique. “We’re looking at films that not only have to do with people moving, but the camera movement itself and its choice of how you are directing the audience,” Russ said. “…There’s lots of different strands… it’s all interesting.”

Kenner Brodsky shared similar thoughts about the unique genre of dance films, “I think what’s interesting about dance films in particular is that it’s a way to experience dance, in a way that’s a little bit more accessible… There are so many different avenues, so many different ways it can be presented.”

Kenner Brodsky and Russ said they hope the audience will leave their screening with something that sparks inspiration within them.

Kenner Brodsky said she hopes their film opens up new conversations and dialogue about dance. “I hope people come to see more dance. Or try to make a film, or see the genre and say, ‘Oh, what would it be like if I did this?’ So just start a conversation or an inquiry.”

Professor of Dance Cynthia McLaughlin was unavailable for comment. 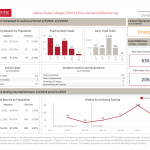