I have been a fan of Spider-Man all my life and 2002’s “Spider-Man” was my introduction to the character. Afterwards, I immediately watched this film, “Spider-Man 2”. I could tell fast that this was one of the greatest superhero films ever made.

Released in 2004, “Spider-Man 2” is directed by Sam Raimi and written by Alvin Sargent.

The film is a sequel to 2002’s “Spider-Man” and it is based on the superhero comic created by Stan Lee and Steve Ditko. The film features Tobey Maguire, Kirsten Dunst and James Franco reprising their roles from the first film, with newcomers such as Alfred Molina joining the cast.

Maguire once again plays Peter Parker, catching up with him two years after the first film. While Peter is consistently saving the day as Spider-Man, it is beginning to affect his everyday life while out of costume. The film follows Peter as he begins questioning whether or not being Spider-Man is worth it due to the effect the job has on his everyday life. Peter will soon have to realize the importance of being a hero in order to protect New York from Doctor Octopus (Molina).

One of the factors that makes this sequel spectacular is that, like the original, it balances multiple different feels well. This film has a perfect balance of the feel of a comic book with reality. There are many comic book style images in this film, including Spider-Man swinging through the city and thieves being caught by Spider-Man, who catches a flung police vehicle in a web. The imagery, cinematography and editing once again all work together to make the film feel like the exciting world of a superhero.

In addition, a horror movie vibe is felt. For example, when Doctor Octopus’s arms become self aware at the hospital, the close up camera angles and editing make it so when the arms attack the surgeons, it is horrifying. Also Doctor Octopus waking up in this scene to find the arms attached to him permanently looks like a Frankenstein sequence.

The concept of duality between villains is further emphasized in the film as well. Peter and Doctor Octopus are connected to each other throughout the entire film. Both of them are extremely intelligent, but have trouble letting go of their desires for the betterment of others. Doctor Octopus needs to learn to put aside his dream of creating renewable energy for everyone as the machine he created puts lives at risk rather than helps them. Peter needs to learn to put his needs for the pursuit of a non superhero life aside so he can continue to help others.

The strongest aspect of this film is its connection to reality through Peter’s dilemma over whether it is worth it to be Spider-Man. What Peter is going through is an existential crisis and that is something that many young adults go through. Many of us have that moment where we question whether or not the way we live life is meaningful, and like Peter, we might turn our backs on being selfless. What Peter learns is to pursue things like relationships and punctual classes while also remembering the importance of selflessness. The film is about finding a point in one’s life, and that is often what adulthood is about.

“Spider-Man 2” is my pick for the best Spider-Man movie ever made. It blends realism with the feel of a comic and a horror film using its environment and characters. The film also connects the hero and villain through dilemmas creating a sympathetic hero and villain.

Best of all, the film explores the search for purpose in life and the need to balance care for oneself with being selfless. All of this combined with Maguire, Dunst, Franco and Molina giving superb performances make this sequel one to web up for a viewing. 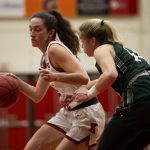