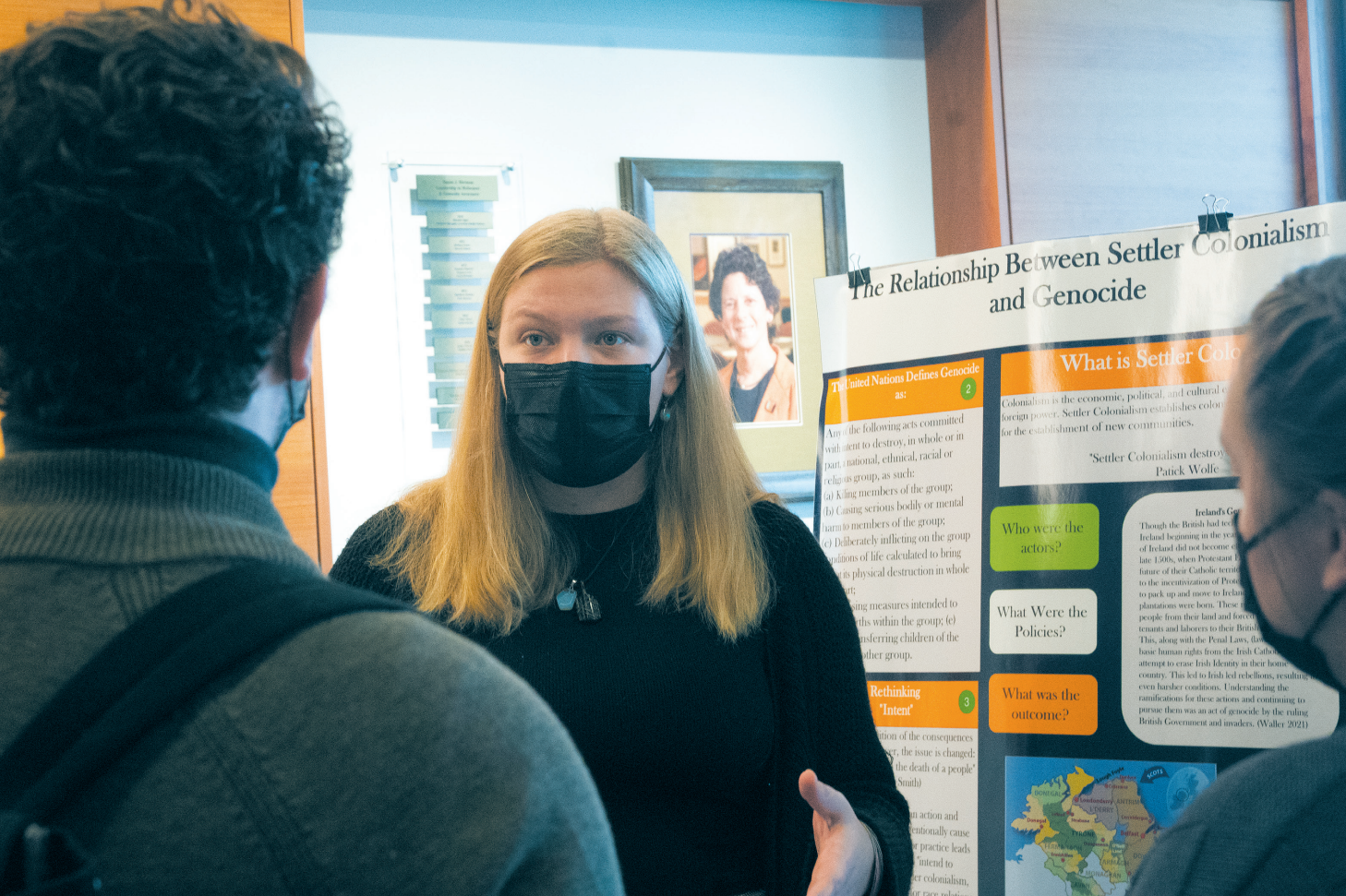 Wednesday afternoon in the Mason Library the Department of Holocaust and Genocide Studies held a celebration of student research. Students in the HGS-495 “Northern Ireland and the Troubles” class shared independent research projects, in the form of a poster, from this semester. There were 22 very different projects to look at and learn from.

“The research projects explore a fascinating diversity of issues related specifically to Northern Ireland (for example, gendered experiences, murals, and gerrymandering) as well as an array of comparative topics with a more global focus (for example, legacies of settler colonialism, hate crime legislation, the disappeared, and walls in divided societies)”, a Holocaust and Genocide Studies professor, Dr. James Waller, said in an email. 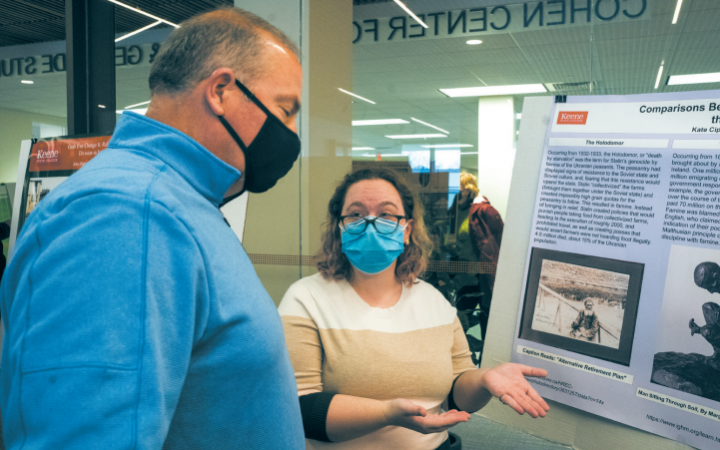 Latham had talked about how women and children had experienced more violence, especially sexual violence. “This results in higher rates of domestic violence within the home, higher rates of poverty post-war, higher STD rates and higher rates of other diseases which can ultimately lead to the death of many women and children.” Latham said that her primary focus for her project was the hunger strikes, which were strikes created by suffragette women in Northern Ireland. She had also talked about the Price sisters, Mary and Delour who were women in Northern Ireland who were arrested for planting car bombs and were fighting for feminism.

After the war, there was a stigma that men were seen as heroes and women were seen as dirty for their participation in the troubles. Latham’s presentation shows the past events and how Northern Ireland hasn’t changed all that much. “So, today in Northern Ireland, in 2018 to 2021 there were 3,136 counts of rape reported… 308 of those were children under the age of 13. Then we also have incredibly high rates of sexual violence. It’s the fourth highest per chapiter rate of sexual violence in all of Europe… In 2018-2019 there were at least 3,215 single homeless females between the ages of 16-59 and the suicide rates in Ireland have risen 30% since 2016… In further research many of these were actually women who started committing suicide primarily just due to PTSD and stress and the inability to talk about what’s happening to them, the exploitation, human trafficking and the violence.” Latham said.

Another student, John Hale and his project was “Grab It or Change It: Reinforcement and Rejection of Division in Ireland and Ulster’s Music”. Hales’ poster had different boxes explaining the conflict. “Specifically political music ranging from the parody and comatic dehumanization present in military music down to reformism from older traditional music.” Hale talked about how his work on this project has given him a greater appreciation for “the breath of music within the country because going in I knew more about republican music than I did oiliest music.”

Emma Rochefort, another student in the class did her project on “The Unjust Violence against Women in Northern Ireland Perpetrated by British Military Forces Since the Start of the Irish War of independence.” The war started in 1919 and Rochefort talked about some backgrounds including military forces, the British, Northern Irish women and violence. “I would also like to state I’m talking about nationalist and loyalist, so I’m talking about the Protestants and the Catholics.” said Rochefort. A lot of women were caught in the crossfire. “From November 1920 a 15-year-old girl was shot and killed in Kerry when a battle took place between armed civilians and the Black and Tans, which is a pair of military groups of the British forces. A 12-year-old girl was shot dead in Dublin on the street when British military forces were firing at the IRA, which is the Irish Republican Army and in a separate incident a 6-year-old was also shot dead by British military forces on the 18th of November and the last one which I think is really important is a 23-year-old women who was pregnant, she was sitting in her garden and she was shot by a passing police car.” Rochefort said during her presentation. Rochefort shared some statistics that about 60% of women have been prescribed antidepressants by general practitioners since the end of the war in 1921. Rochefort says, “The most shocking thing that I found was how often women were bobbed.” Bobbing is the cutting of women’s hair to take away femininity, “They would no longer be identified as a woman and during that time that was unthinkable for many women.” Rochefort is also an early childhood minor. “I have always been interested in how women and children are affected, mostly girls because I am one, so I really wanted to talk about the violence against women in Northern Ireland because it shows how big of an issue it was and still is.” says Rochefort.

Dr. Waller said that teaching the class was “great. This is the first time I’ve taught a course on Northern Ireland. I published a book on it that came out earlier this year and I wanted to always teach a course on it, and this is my first chance to do so, and the students have been remarkable in terms of their willingness to dive deeply into a case study and not just learn about Northern Ireland but also learn from Northern Ireland.” The projects the students presented went on all semester. “It went through several stages of, they drafted a research question, they developed resources, they laid out a rough framework of what they wanted to present and then we moved it onto the poster format which we did through The University System of New Hampshire. Waller explained that all the students had a template PowerPoint slide they used and worked on how the information best ft, how to make the poster appealing to the eye and communicative and drew people in.

Waller will be teaching the class again and hopes to teach a course on Northern Ireland every year. Waller said, “I was honorary visiting research professor at Queen’s University in Belfast, Northern Ireland in 2017 and I’ve always just thought this was an incredibly interesting case study and particularly when Brexit happened, I knew the impact Brexit was going to have on Northern Ireland so that’s what really drew my attention to it at the time.”

Ashlie Chandler can be contacted at 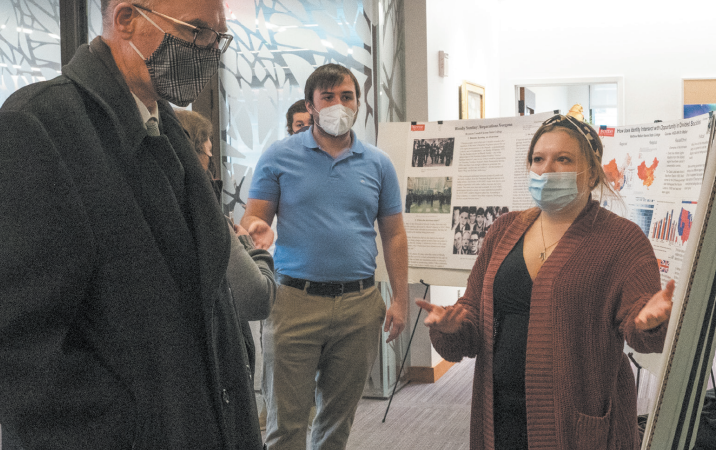 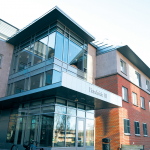 Mold reported in three KSC dorms Previous
Randall Hall and Monadnock Hall to be considered for... Next