To finish out the first set, a block by Emilyann Ashford and Sydney Johnson gave Keene State a 1-0 advantage.

With U-Mass taking the second set, the Owls were looking for a comeback in the third and they got one. U-Mass scored four consecutive points but it was too late for the Beacons. A bad set by the Beacons allowed the Owls to win their second set of the day, giving them a two-one advantage.

The Beacons tied the game in the fourth set causing the semifinals game to go to five. The Owls were leading for the beginning of the fifth set until U-Mass made a rebound. Keene State and U-Mass both needed two points to take the game. Another kill and a bad set by the Owls finished off the game for the Beacons. 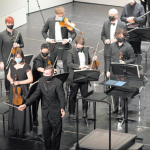