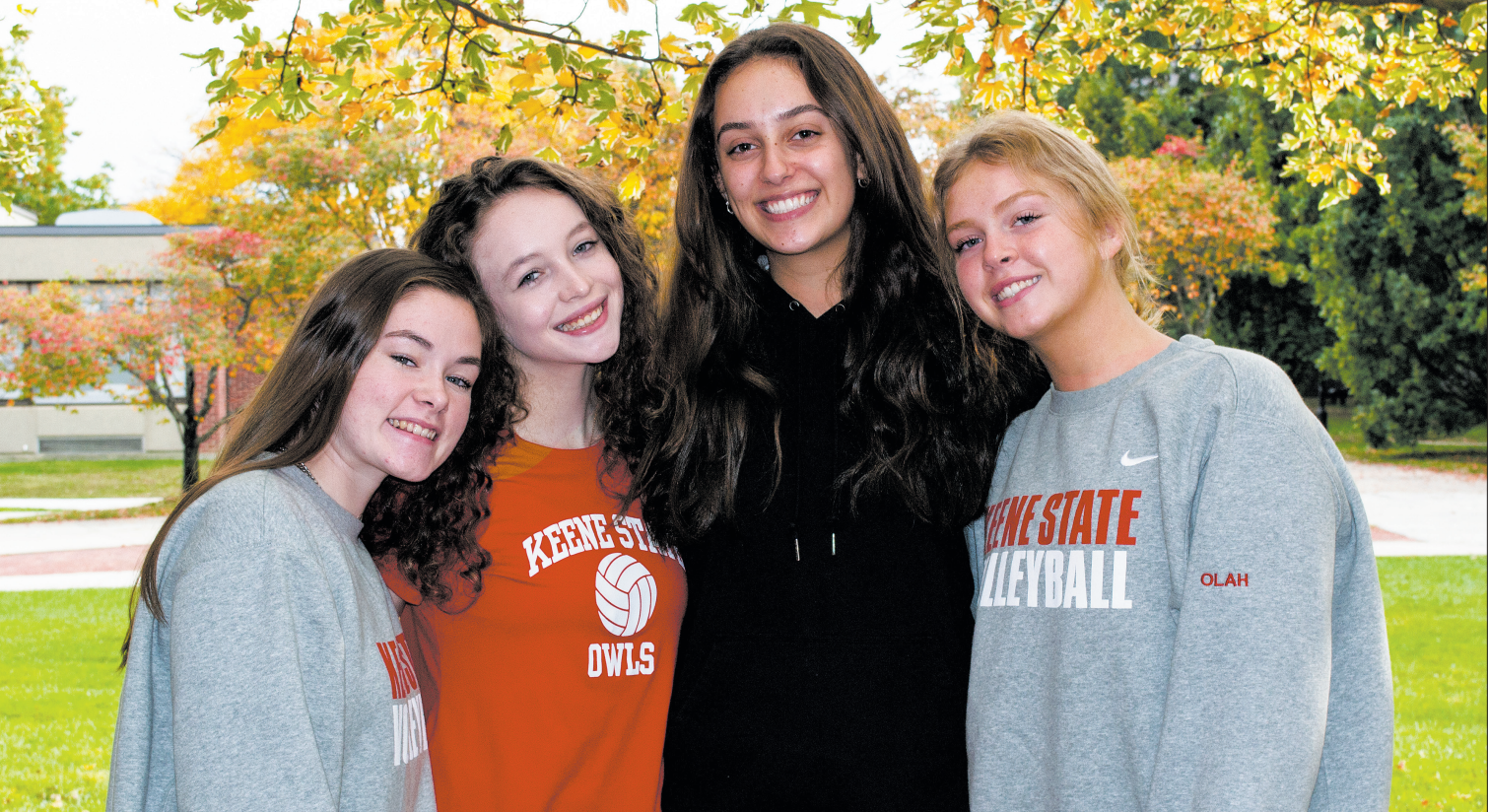 These first-year volleyball players are in it to win it, together

The Keene State volleyball team is where friends turn into family, and the first-year players are fitting right in.

Marblehead, Massachusetts, native Molly Wetherbee got her start in volleyball her freshman year of high school. The Essex Technical High School graduate said she started playing due to the recommendation from her grandmother because of Wetherbee’s height; the athlete is 6’2. She said that she didn’t really start enjoying the game until her junior year of high school. Her original plan was to play college lacrosse, but she ended up falling in love with volleyball and started playing on a club team.

Windham, New Hampshire, native Kristlynn Hunt said she got her start in volleyball about six years ago. The Windham High School graduate had just moved to Florida and was looking for something to occupy her time. Hunt said that her cousins had just started playing, so she decided to join. She has been in love with the sport ever since.

Goffstown, New Hampshire, native Theresa Norris got her start in volleyball in middle school. The Goffstown High School graduate began playing in seventh grade, the moment the option became available to her. Norris said she was originally going to play field hockey, but volleyball was the path she decided to take.

Lastly, Trumbull, Connecticut, native Stephanie Olah got her start in volleyball in high school. She had been a competitive dancer for about ten years but wanted to become more involved in her high school environment. Olah said she had a personal relationship with the captain of the team and decided that she wanted to go for it. On a side note, she said her brother is a college athlete as well, and a little sibling rivalry never hurt anyone.

While the adventure that college athletics would bring was an exciting thought for all of them, there were undoubtedly some nerves about coming into this world. However, these four athletes found a safe place in each other. “I think, and especially with all four of us, that we meshed really well and clicked really well and kind of just supported each other through it because we all knew we were facing the same thing, like we were all scared when we got here, and I think as we played together more it kind of grew us closer, as well as with the team,” said Hunt.

“You say ‘I’m playing volleyball for Keene State’ but you don’t know what that is until you step foot in that gym,” said Olah.

These athletes had a candid, amiable explanation for what the team dynamic feels like to them. “A family is a great way to describe it, in the sense that we are so close, but we still have ups and downs. Families don’t always get along, it’s not a perfect relationship, nor is anything, but we always come back together no matter what…There will be ups and downs in the way we’re playing, on and off the court, no matter what, but we will always be back together as a team at the end of the day,” said Wetherbee.

All four athletes said that their inspiration comes from their families. While they all expressed appreciation for their entire families, there are a few specific people they mentioned.

Hunt said that she feels like her father has gone above and beyond for her and her volleyball career. “Ever since he was my coach, he has nonstop pushed me and done everything he can to make me successful,” she said.

Norris said that her mom is her biggest inspiration because she has always been there, no matter what. “…I chose volleyball and when that happened my mom was like ‘Ok, we’re all in. It’s volleyball, let’s do this’…She was always a single mom so it was a lot, going to tournaments, but she always made sure she would never miss anything…She just pushes me to be my best.

Olah said that her father has inspired her the most. “He just genuinely…he shows me that he works so hard, and he never would compare me to other people which I thought was huge…I feel like he taught me how to be an athlete,” she said. Olah also commented that her family has gone through some struggles during the COVID-19 pandemic. She is grateful to her mom for attending every one of her games. “She just cares so much, and I couldn’t be more thankful for that,” she said.

Wetherbee said that her inspiration comes from her father. “He doesn’t really know volleyball very well, like at all, but he takes time out of his day to watch videos of volleyball. And if I tell him something I’m trying to fix, he finds a million YouTube videos and sends them to me…He watches volleyball to understand the sport more, so he can understand it with me…He just cares more than I’ll ever know.” Wetherbee also commented that her family has gone through some struggles during the COVID-19 pandemic. She said she is grateful to her mother for always being there for her and supporting her volleyball career. “She would just do everything no matter what it took to get me to play volleyball as long as I could,” Wetherbee said.

Head Coach Robert Weiner and co-captain senior Sarah Williams had only good things to say about the first-year athletes.

“We got so lucky with this group…It is a group who are enthusiastic, and funny as hell, and individualistic but they blend really well, and all four of them are really talented, they’re going to be very good volleyball players,” said Weiner.

While he is preparing to say goodbye to the graduating seniors, Weiner said he is excited to see what is in store for his first-year players. If he could use one word to describe this group of four, he would actually use two. “There are two words that come to mind. One of them is rambunctious, because they’re just…they tend to, during games at timeouts, they dance…Also, honestly with this group, they’re terrific,” he said.

Co-captain Williams thought about the team dynamic from when she was a first-year athlete, and she said she is happy with how the team blends and gets along now. “This year we’re all just one big group and it’s really important that it is that way,” she said.

If Williams could describe the group of four in one word, it would be outgoing. “I think that none of them really came in kind of shy or soft spoken. Our first week of pre-season was really interesting because…it kind of felt like we had already been playing for so long, and they were really quick to jump into everything. They’re all pretty loud people. Just very friendly, outgoing, and it did not take them long to warm up to any of us.”

While these girls are all different, when it comes to volleyball, they’re like soul sisters.

“We’re so different but we come together so well,” said Hunt.

When asked if they have any goals they would love to accomplish by the end of their season, the answer was unanimous. “Although we don’t see the court much, we will be part of that team that wins [The Little East Conference],” said Wetherbee.

These four have some advice they want to give to potential future athletes: just do it, don’t spend too much time worrying, and enjoy the ride. “Everything’s going to play out very easily,” said Weatherbee.

“We’re just a big puzzle, and if you’re a puzzle piece coming in, you’re going to fit,” said Olah.

All four first-year players provided comments for this article together.