KSC’s Art Collective is up and running this year

Keene State’s Art Collective has begun meetings for this academic school year, to provide students with a creative outlet and help them make connections.

The Art Collective is an all-inclusive club on campus that focuses on activity-based art projects. TWhe club was restarted last semester and is currently organized by president Riley Young.

Young described the club as being, “A really great outlet for people to be able to meet each other and just be around [other] people who are interested in the same thing as you.”

The members of the executive board take other group members’ artistic ideas into account, “If you have an idea and [are] like, I want to do tie dye, then great, we’ll do tie dye,” Young said.

Young mentioned how she really wants the Art Collective to be a club that works for all students and for anyone who wants to get involved.

During the pandemic, the Art Collective struggled with membership and to gain new members. Since then, Young has consistently tried to get the word out about the club and email students that are interested. She said students should consider joining the club because, “There’s not another group for our students on campus, and I think that [it’s perfect] for students who are in the art department as well as kids who are interested in the arts, but maybe don’t want to be an art major.”

Young added, “An artistic outlet would be really nice for people. “

In order to gain more members, the Art Collective has moved to less frequent meetings. “We’ve decided to move away from that just because of the transition going from COVID weirdness to a more normal schedule. Everyone’s so busy,” Young said.

Young mentioned the club’s main goal for this year is to, “get [it] off the ground,” and to gain enough traction so that the club can become a bigger thing on campus. She hopes that the club will continue to run smoothly after her and the other senior members graduate this upcoming spring.

On Friday, October 1, the group held a chalk drawing event and for their next meeting, they are planning to do figure drawing with a model. The meeting will take place 12:00-1:30 p.m. on Friday, October 22, in the painting studio located on the third floor of the Redfern Arts Center.

If you are interested in joining The Art Collective please email Riley Young at Riley.Young@keene.edu. The same applies for joining the club’s executive board, which meets weekly via Zoom.

Art Collective faculty advisor Emily Lambert and e-board members Stacey Willet and Ray Laventure were not available for an interview. 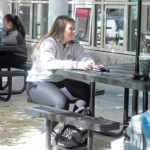 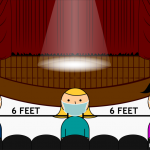