The work of David E. White finds a new home

These pieces are a selection of illustrations from The David E. White Children’s Illustration Collection. This exhibit in the Thorne Art Gallery is just a small selection from David E. White’s collection that was displayed in Rhodes Hall on campus.

One way the gallery chose to link the two as one collection was by painting the wall in the Thorne Art Gallery the same color as the corresponding wall in Rhodes hall. Paul McMullan, director of the Thorne Art Gallery, said, “This show, the children’s show, is in conjunction with Advancement in Education and Art, so we all kind of came together to help out with the collection that was in Rhodes Hall.”

McMullan also said, “Partly because this collection used to be in Rhodes, it used to go down the hallways. There’s a lot of light coming in there and it’s damaging some of the pieces.”

McMullan said this is all so they can be “permanently archived” in the Thorne Art Gallery and used in rotating shows of this collection.

Other faculty who have worked on moving this exhibit from Rhodes Hall into the Thorne Art Gallery are Dr. Tanya Sturtz, Associate Dean of the School of Arts, Education and Humanities, and Dr. Darrell Hucks, a Professor of Education. Sturtz and Hucks said they are both excited to bring this exhibit to the public and to protect the collection from damage. Sturtz said, “We’ve learned what we have to do to take care of the collection, so if we don’t do this then it will just continue to fade and deteriorate and then we can’t have it.”

Sturtz weighed in on the relationship this project had produced between different departments on campus, including help from Mason Library archivist Rodney O’Brien. “It created this collaboration because it also includes Rodney [O’Brien] at the library who does archiving,” Sturtz said.

Sturtz said she is excited to keep growing the collection and holding exhibits. Sturtz said the main idea of moving the pieces was, “How do we get it so people can enjoy it for many years?”

The specific exhibit and the pieces in it came about by having a desire to honor David E. White. Sturtz said, “Part of what Saturday is about is honoring David E. White because he had a legacy he created through the Children’s Literature Festivals that started in 1978… How do you not honor somebody for this amazing work that he did?”

The pieces that were chosen for this exhibit were picked by White himself from the collection. Sturtz said she was also invited to choose ten pieces that have a lot of meaning to her. “From that list, we created the exhibit that you see here and then we named it Story Time,” Sturtz said.

While this is an exhibit curated from Children’s Literature Illustrations, Sturtz expressed that it’s meant to connect to all ages. Sturtz said, “The point of this exhibit is that it is children’s illustrations but the power of children’s literature, and a lot of people don’t realize this, it is intended to engage people of all ages… The illustrations bring to life the words in the story, so it allows people of all ages and abilities to engage with it.”

This exhibit also includes the actual books that the illustrations came from so people can make the connection between the art on the walls and the art in their favorite stories.

The whole team is very happy to open their doors to the public after such a long time away from social engagement. Hucks said opening the gallery is a “wonderful way of stimulating people, bringing art to people, people need this; they need to see beautiful things.”

The team has a number of things in mind that they hope putting this exhibit up will accomplish. Hucks said, “For Keene State, for the people that know Dr. White and his history, I want them to come and see this in honor of him; so there’s the appreciation factor. Then I want them to make the connection between this space and Rhodes, and how we’re trying to reimagine that space and get people engaged in the collection.”

Sturtz added, “I see this exhibit as this one piece of this much bigger wheel.”

The team said they hope that in the next year, the space that is being made in Rhodes Hall can be used for student artists while the pieces from this collection can be rotated through and appreciated.

0Shares
0 0
Down to one: Previous
Going above and beyond Next 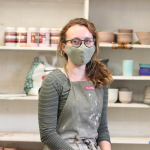