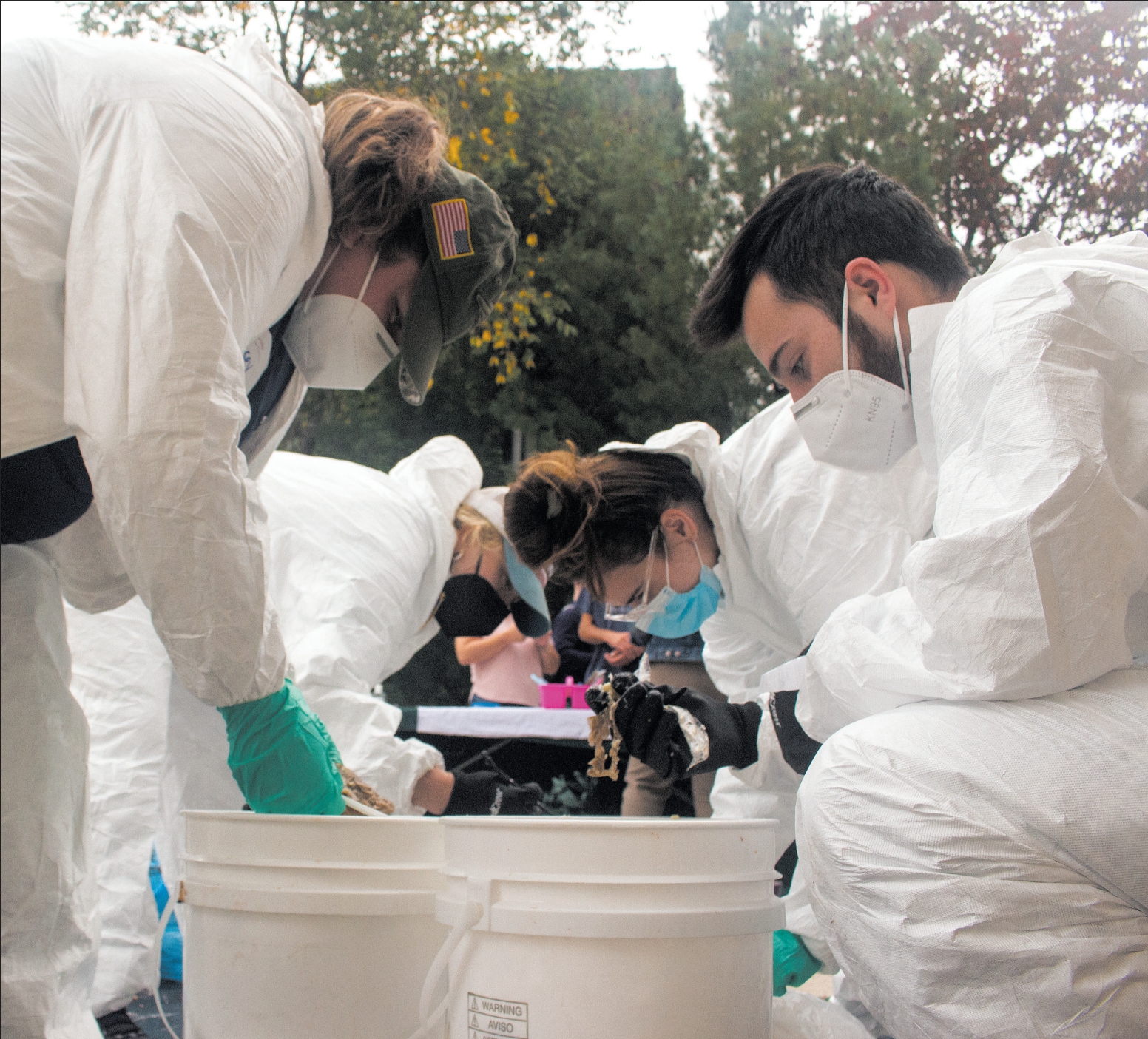 Students sort through trash and compost to analyze campus waste

Students walking in front of the dining commons on the afternoon of Thursday, Oct. 14 were met with the sight and smell of four fellow students sorting through trash and compost.

ENST (Environmental studies) professor Karen Seaver and her four senior seminar students conducted a waste audit on Thursday. Senior ENST major Joshua Lowton explained the process that the students would be going through during the afternoon. “Basically a waste audit is data. We are going to look at the contaminated waste that students produce at the [DC,]” Lowton said. “So we have collected trash during a lunch rush today… We are going to be doing two, one monitored, one unmonitored [waste audits]. This is the monitored one and we collected a couple of trash bags for the landfill… We also have seven compost bags that we will break open and disseminate, or go through, to find actual compostable material versus contaminated [material].”

The students’ goal is ultimately to increase awareness of composting and justify the need for monitored compost in the dining commons and elsewhere on campus. To do this, Lowton said they will be comparing how much contaminated waste is in the compost bags during the monitored versus unmonitored lunch periods.

Senior Casey Brown is also an ENST major with a minor in political studies. Brown emphasized that the question the senior seminar class is trying to answer is: “Is it justifiable to have somebody there sort of informing students of what is acceptable and not acceptable to compost and the contamination levels because of that?”

The ENST–495 course is what Seaver calls “senior seminar.” It is the second part of a two-semester course that is mandatory for ENST majors. The course this year is composed of Brown, Lowton, senior Emily Yost and senior Paige Cianciolo. Last spring, as juniors, the students created a project proposal and identified their community partner, Elm City Compost Initiative.

While the students landed on waste management as their focus, Seaver said this was not the original plan. “We kind of proposed a couple of ideas around compost or even recycling efforts on campus… I would say there was a smidgen of convincing needed last semester. They didn’t come into it saying, ‘We have to do food waste’ or nothing,” Seaver explained. “This semester we met with the DC staff and they are so enthused about what we are doing and that really energized this cuatro of students and that’s kind of how it unfolded. It started out with a core student interest and I think the fact that they honestly do really care.”

Students walking by the waste audit were able to see just how much these four students care about composting. Their peers saw them elbows-deep in bags of food from the lunch rush, picking out small pieces of trash, such as cream cheese containers and plastic wrappings from silverware. For Brown, however, it wasn’t about the gross nature of the project, it was about being an example for others. “Honestly, I am ready to gear up in this tyvek suit and be on display in front of the DC. I am excited to just be a liaison of change and I think that is going to be really exciting.”

The basic idea of a waste audit can bring a lot of change. Senior Joseph Blood was a member of R.O.C.K.S (Recycling on Campus Keene State) for three years before it was disbanded along with the Eco-Reps program this past summer due to budget cuts. Blood will be spearheading the waste audits in the dorms on Oct. 19 and 21. Blood will be particularly interested in the change to singlestream recycling on campus and if this makes students more likely to recycle. “[Waste audits] impact campus because it raises awareness for students and teaches them what you can throw away and what you can not,” Blood said. “Like now we are much more lenient compared to beforehand so I think it’s going to be a lot easier trying to get [students] into it now because we are doing single-stream and not having to pick through each and every bottle.”

Seaver explained what she believes to be the big three benefits and impacts of composting on Keene State’s campus: economic benefits, environmental benefits and trying to close a loop. In terms of economic benefits that are tangible for students, Seaver said, “…Proper disposal of waste saves money. And if we want to keep Keene State affordable, this is a way to support that. It’s not obviously the end-all-be-all of tuition and affordability but students are concerned about meal plan cost and part of the meal plan cost is waste and staffing. We realize there are staffing costs and material costs, all these costs associated with proper and improper waste disposal.”

Lowton also explained the environmental benefits and how Keene State can avoid contributing to climate change by composting. “It’s a mindfulness action for an individual, for college students, that helps save the campus and environment in general instead of just going to the landfills to produce methane and carbon dioxide. So it does actually help the climate a little bit too because the anaerobic digestion of food over time when laying in landfills does create methane so [composting] decreases this.”

In the end, these students are trying to preserve sustainability on campus even after so many of the programs around recycling and composting were cut. For students like Lowton, it was a major factor as to why he chose to attend the school and he wants it to continue for the future generation of students, but it is up to the entire student body.

“There is actually a diagram above the compostable bins for what can and cannot be composted for students to look at when they are doing it which is super helpful… It only takes two minutes.” 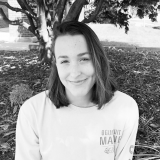