Courageous Conversations is an event that happens multiple times over the course of the semester, where students can get together and discuss a variety of sometimes sensitive topics in a friendly and supportive space.

Although the event was advertised on notice boards around campus as well as on Owl Net, there were no students present to attend the event on the Wednesday Zoom call.

One of the facilitators of the event, Hunter Kirschner, the coordinator of LGBTQ+ student support, attributed the lack of attendance to the event being held online instead of in person. “The whole time of doing the promos for this, like “Please register, scan this QR code,” and you know it’s those extra steps. And so that piece as well as just making a commitment, I think that’s another piece.”

Previously, Courageous Conversations had been held in the Mabel Brown Room where students sat in a circle and spoke face to face with one another. Now, to attend the event students need to scan the QR code on the poster to register for a Zoom link to be sent to them.

Kirschner said that these extra steps could be a reason students aren’t aware of the events and that it could also be due to the way information about on-campus events spread.

Kirschner also noted that students like to attend events spontaneously rather than planning to go to them. “KSC Pride had their second meeting on Tuesday and they did the marshmallow roast, and so there’s fires on the Student Center lawn, folks are like ‘Oh what’s going on? Cool, I wanna hang out,’ and that was awesome.”

One of the problems that face the Courageous Conversations event is that it requires more structure and planning on the student’s part. It isn’t the kind of event that you can walk in on halfway through and join. “It’s a hard balance in thinking about the more structured things or the commitment because the idea is that folks will show up for the conversation and be there for the duration. And so to me, that does take planning,” said Kirschner.

Although the facilitators were disappointed by the lack of turnout on Wednesday, they believe that it is an important resource and activity for students to be able to take advantage of. Celia Rabinowitz, Dean of the Mason Library and one of the hosts of Courageous Conversations, spoke about why being able to discuss sensitive topics in a respectful way is important. “I’ve been involved with the OMSSS (Office of Multicultural Student Support and Success) stuff particularly on the race conversation, safe-space side…I think there’s a lot more awareness…The issues haven’t gone away and the challenges have not gone away, there are still things that happen. But I think everyone on campus is more aware of how important it is to know that these things occur and especially to understand the kind of impact they can have on somebody affected by that.”

Although the attendance was not what they imagined, the facilitators of the event will continue to host it, whether it is on Zoom or in person, so that students have a space where they can learn to be aware and respectful of multiple points of view. “No place is ever gonna solve these problems 100%,” said Rabinowitz. “I think a lot of it is about awareness, and I think that we’re much better at that now.” 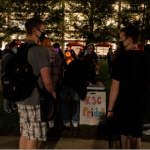 S’mores and togetherness Previous
Volleyball: KSC vs. WestConn Next 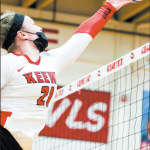