STRIKING GOLD IN THE LITTLE EAST 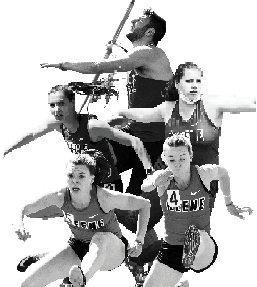 This past weekend, the Keene State College men’s and women’s outdoor track and field team hit the road to Dartmouth, Massachusetts, to compete in the 2021 Little East Conference (LEC) Championship Meet. This would be the first in-person championship meet the team would see in over a year due to the 2020 LEC Cross Country Championship being cancelled this past fall and the LEC not holding any winter sports championships.

The championship meet was the ‘cherry-on-top’ of a successful season full of competition for the Owls. However, rewinding to the beginning of the semester, it was a season that even the team doubted would happen at some points.

“It was honestly impressive that we were able to have as many meets as we did and I’m grateful that we even got the chance to compete,” said graduate student Nicole De Almeida. “At the beginning of the year I was skeptical, but our athletic department and the LEC put in so much effort to make sure we were safe and could compete.”

Senior multi Alexis Gauthier shared similar sentiments with De Almeida, explaining that, even after the season had started up, the team still struggled at times.

“Obviously, I wish I was able to compete more and have other seasons, but I’m so thankful that we at least had an outdoor season,” said Gauthier. “It was really tough finding meets this year for everyone. Unfortunately, other schools weren’t as lucky, but I am glad we got the chance, especially for the seniors this year after having a rough few seasons.”

This semester, many spring and fall sports teams were forced into quarantine, some multiple times. However, the outdoor track and field team made it through their entire season with no full-team quarantines required. Head coach Paige Mills said that that is a true testament to the spirit of her team.

“We were so lucky to not have to quarantine as a team this semester but it’s truly a testament to the group of athletes we have in the program,” said Mills. “They witnessed other teams in the conference and at KSC needing to take a step back from practice and competing and they did not want that to happen to us… Being an athlete on any NCAA team and at KSC this year has required more sacrifice and more patience than any other year in my opinion. From strict testing windows and the extra responsibilities and pressure to keep your teammates safe and competition ready, I think this year has been good for personal growth and perspective.”

Mills said that, as a coach, she made it clear to her team how fragile the opportunity to compete was and constantly reminded them about the end goal: compete at the Little East Conference Championship and be safe doing it.

“The first goal was to stay healthy and COVID free,” explained Mills. “After that, the main goal was to have fun and cherish every little opportunity we had to train or compete. Every time we made it to a real meet I told them to treat it like it could be their last. To qualify for LEC’s you need to have a mark in your event and be in the top 16 for track events and [top] 20 for field events. So that’s all we were trying to do, have fun and get marks. If personal bests happenedw, like they did, that was just icing on the cake.”

As for this past weekend, the Owls struck gold in the Little East, bringing home four individual event wins and top five finishes.

On the women’s side, one of the biggest wins of the meet came at the hands of junior thrower Shannon Parks, who placed first in shot put.

Parks not only took home gold, she also broke her own Keene State school record for the second time this season and was only an inch shy of breaking the Little East Conference shot put record.

“This was one of the meets I’ve been working towards, I went in with the goal of having a PR (personal record) and getting first place and having that happen was phenomenal,” said Parks. “Going into this season, my goal was to PR a few times, getting a faster, more powerful glide and getting a third turn down in the hammer. I definitely completed the first one, [but] as for the second and third, I feel like there will always be work to get down to get better and throw further.”

Another golden performance for the women’s teams came from De Almeida, who reclaim her LEC 400-meter hurdle champion title which she earned in 2019 as a junior.

“It always feels good to win but, for my last meet, it was the best feeling to know I went out on a high note and with a medal,” said De Almeida. “My goals for this season really were to do my best, finish the season strong and reclaim the 400 hurdle title that I got my junior year. I was able to win the hurdles again this year and think I really put everything I had left into this final season.”

The final gold medal earned by the women’s teams came from Gauthier, who placed first in the 100-meter hurdles event with a time of 15.49 seconds.

“I’m happy I got to compete in one more LEC championship and to have another hurdle title, I’m happy it was in one of my favorite events,” said Gauthier. “Feels good to be able to add those 10 points to our team score.”

The men’s team, who competed a day after the women’s team, had their own champion as well.

Fodor was reached out to for comment and did not respond before the deadline.

Fodor currently sits at 13th in the nation for NCAA DIII javelin.

For many, this championship meet marked the end of a long career as an Owl athlete.

“First, I have to say thank you to all of my teammates,” said De Almeida, who was using her extra season of NCAA eligibility to compete as a graduate student. “Truly without them, and all my previous teammates as well, I could not have been as successful as I was. There was no better feeling than hearing the cheers from them during workouts or races that got me through the tough times. And going forward I would tell them all to appreciate and treasure every moment and race you get. The years fly by so it’s important to live in the moment and always put everything you’ve got into it.”

Gauthier, who has competed as an Owl ever since transferring from the University of Maine, shared similar thoughts with De Almeida.

“For my teammates returning, I want to say thank you for being so awesome and making college athletics worth it,” said Gauthier. “Enjoy and embrace everything that comes your way the next few seasons and train hard, these few years go by fast.”

Mills explained that the track and field team is not only losing great athletes, however, they are also losing true leaders with this year’s graduating class.

“We are losing some incredible student-athletes and leaders that have also been key players for us so they will be greatly missed,” said Mills. “I am so thankful for our seniors and for the legacies they are leaving behind but we are all rooting for them as they move forward in their lives and careers.”

De Almeida, who has been competed as an Owl both on the track and on the soccer field, had powerful parting words for the Keene State athletic department.

“A huge thank you to all of my coaches and the Keene athletic department,” said De Almeida. “Keene athletics have been such a huge part of my college experience and I will forever be grateful for everything they gave me along the way. I loved every moment of wearing a Keene State uniform.”