The nominations were selected by Erika Guay, a professor of theater at State University of New York in Plattsburgh and a representative for the Kennedy Center American College Theater Festival.

According to the email sent to the cast of the show from director Kirsten Riegler, Guay “could not stop talking about how much she loved the show.” Guay also “said it was such a tough decision to narrow down nominations because she truly was impressed by all of you [the cast and crew]”
First-year Gray Hardaker, who played Jaime in the show, was nominated for the Maltby, Jr. Award Nomination for Musical Theater.

The cast and understudies also received a Certificate of Merit from the Kennedy Center.

Along with the nominations, Hardaker and Newey were asked to perform the songs “Next Ten Minutes” or “Goodbye ‘Til Tomorrow/I Could Never Rescue You” at the Kennedy Center in D.C.

It is unclear if this year’s Kennedy Center American College Theater Festival will be held in-person or virtually. 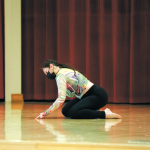