After one of the men’s soccer team members tested positive for COVID-19, the team had to postpone four scheduled games during the month of April. Keene State College head men’s soccer coach Rick Scott said that 19 of his players were put into quarantine after a positive case was found within the team. This was the first positive case the team had since the start of the spring semester.

The team members got out of quarantine and got tested on April 16.

“I’ll have my team back on Sunday (April 18). We hope to start practicing again,” said Scott.

The team will be practicing for their rescheduled games on April 22 at Rhode Island College, April 23 at New England College and May 1 at home against Connecticut College. Scott added, “Right now, we have three games scheduled and we’re trying to get a fourth with University of Southern Maine, we’re going to see, we’ll go up there and play them if they have an open day for us.”

Scott said that the soccer team is trying to reschedule the canceled games as well. He further explained, “But we’re not having much luck, because Plymouth State’s soccer guys went into quarantine. I think they will come out tomorrow (April 17). So we’re not sure if we’re going to have the window there that we need to reschedule that game. And the same with Castleton.”

He continued, “We’re being very flexible. I told those coaches, we would go up on a Sunday, we did not care. We would just make [it to] whatever date they told us, whatever time they told us– we would be there. We’re still working on that, but it doesn’t look real good.”

Scott expressed his disappointment with losing the scheduled games. He said, “Because we had been working pretty hard…. We wore masks even when we were playing, …we didn’t have to, but we messed up anyway. And then we had that positive test on a team that put us into quarantine and out of commission for those games.”

Scott is hopeful to play the games that are scheduled, “Hopefully we can play these last three or four and and give our first-year kids a good experience, send off our seniors in a positive note, and all the guys in between: the sophomores, the veterans and the juniors, get them some playing time as well and experiment with different formations and ideas.” 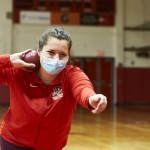