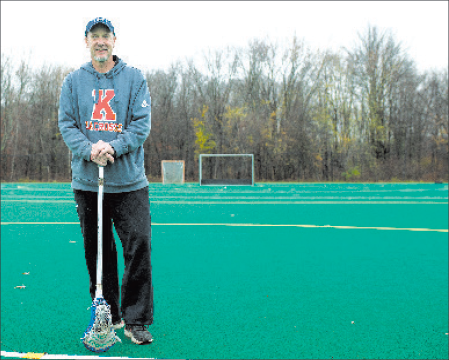 Sometimes great things can happen with just a simple question:

That was the question that a young Tom Carmean asked a young Mark Theriault during day one of Theriault’s career on a professional lacrosse team out of Boston back in 1995. This would be the beginning of a friendship that would land Carmean at Keene State College in 2021 as the assistant coach for the men’s lacrosse team, standing side by side with Theriault, the head coach.

This would not be the first time Carmean would step into the coaching role however. Prior to Keene State, Carmean held the head coaching positions at a variety of schools over the span of 20 years.

“It’s phenomenal, honestly it’s like having two head coaches,” explained Theriault. “He was the head coach at Amherst College for 11 years, Guilford College for 9 years… There’s a list of accolades that he has. You know, 3-time All-American at the Division I University of [Massachusetts], he was on a proteam, he was an 8-time All-Pro, captain of the [professional] team, MVP of the team… About a month ago, he just got appointed the head coach of the Swedish National team… 2 years ago he was inducted into Western [Massachusetts] Hall of Fame, I could just keep going.”

Carmean’s success on the field radiated to the sidelines when he took up coaching, leading both Amherst College and Guilford College to high-successes during his time at the respective colleges.

Carmean began his Keene State coaching career back in 2019 while working for a non-profit called the Pediatric Brain Tumor Foundation.

Carmean explained that the work with the foundation allowed him “time to work in the afternoons coaching lacrosse [at Keene].” Carmean took a step away from Keene after the 2019 season, taking an athletic director position in Maine. However, everything changed when the COVID-19 pandemic hit and Carmean decided to return to Keene and take back up the assistant coaching position.

And it was a decision well made according to Carmean.

“I bring 20 years of being a head coach, so I know all the things that [Coach Theriault] is doing and how to make my role as an assistant as helpful as possible having known what it is being the head coach,” said Carmean. “And [I’m] actually enjoying the role so much more than being responsible for everything and just getting a chance to coach and really do the things that I love the most which is working with players.”

Theriault, who has been the head coach of the Owls for 20 years, says that Carmean is an outstanding addition to the coaching staff on many levels, and the athletes know it too.

“They know what he’s all about,” said Theriault. “They’re sponges, they’re taking everything in with him. We treat it like two head coaches, not one and one or anything like that because the roles could be easily switched and I think for both of us, we’ve been coaching for over 20 years, that’s the other nice thing, there’s no ego whatsoever. We shoot things back and forth.”

But, what is it like for the athletes having their coaches be long-time best friends?

“I think Coach Theriault and Coach Carmean are a great coaching tandem,” said Hamilton in an email interview. “They are good friends, and they work off each other. Coach Theriault will be quick to bring the energy in practice and games, while Coach Carmean will go over the X’s and O’s of all our set rides, clears, and overall schemes throughout the game. I love having two established coaches overseeing the offense and defense when we split during practice… They are the best coaching duo I have had in my lacrosse career.”

Phil Racicot, Keene State’s Director of Athletics and Recreation, missed out on meeting Carmean during his 2019 campaign with the Owls, but says he’s excited to finally see both Carmean and the men’s lacrosse team in action.

“We’re really fortunate to have someone with his background and experience and pedigree and more importantly, he’s got a great attitude and a lot of experiences,” said Racicot. “I’ve never been to a Keene State men’s lacrosse game, or women’s game or baseball game or softball game based on the time that I started. I was scheduled to go to Florida a year ago and watch all of those teams play and that would have been the first time I would have seen those teams play. But, we all know what happened. But I did witness a lot of practices, or some practices, last spring and, not downgrading anyone that was working here on the staff at the time, but I think at that time we had a younger assistant and I think the difference is, and looking at what Tom brings to the table, is that he has a real great sense of organization and structure and will bring that to the practice field.”

Carmean has some of his own goals coming into the season, one of the big ones being valuing each game like it’s the last, because in this unconventional season, it could be.

“I think if we can, especially for some of the younger guys, really spend time instilling fundamentals that they’re going to be using year in and year out here,” said Carmean. “And then for the older players, do our best to make this as worthwhile of an experience as they can have given the circumstances. I think that it’s important to realize that these years are really valuable to them, if you’re a senior this year it means you lost last year… we realize the value in what they are losing in some of these situations.”

Carmean added that a long term goal for both himself and Theriault includes building up the recruiting base and returning the men’s lacrosse team to their peak performance. Whatever the goals may be, it seems like Carmean and Theriault have the team’s support.

“I feel like if you ask every player on our team, they would say they love playing for Coach Carmean,” said Hamilton. “I personally would play until I had to be dragged off the field from exhaustion for Coach Carmean. All of us on defense love him and they can’t appreciate what he brings to the team and the game of lacrosse enough. I would go to war for him.”

Oh, and in case you were wondering, Carmean and Theriault still carpool everyday to practice. 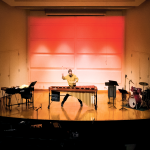