A protest scheduled for Friday, February 19 was postponed, then cancelled.

The “Justice for Keene State” protest, which was originally supposed to be held in front of the L.P. Young Student Center at Keene State College on Friday, February 19, was rescheduled for Tuesday, February 23, due to inclement weather.

The protest scheduled for Tuesday, February 23 was also cancelled, however this time due to COVID-19 concerns.

“I’ve heard from a lot of different sources that our school is at risk for closing,” said sophomore Sophie Poppenga, who organized the protest.. “Obviously, with cases rising and other schools in the state being shut down, that was pretty scary to think about, us being held accountable for that,”

Poppenga further explained her reasonings for cancelling the protests.

“I think that there’s some event going on on-campus where they weren’t super excited to have us having our protest today, and I figured with the number of people already going to be on-campus and in that area for an event, I did not want to risk my personal safety, my staff’s safety or just the safety of the campus, and I know that if there were to be an outbreak from the protests, that would fall onto us as the organizers for not recognizing the safety concern,” said Poppenga.

Poppenga went on to say, “So while we’re obviously very sad that we had to cancel, it’s obviously going to benefit the campus a lot more to not have this large gathering where social distancing might not be as prevalent as it could be in a different situation.”

Despite the cancellation on the organizational level, some students still showed up in support.

“I’m really disappointed by what happened today,” said junior Bailey Saddlemire, “I think we had maybe five or six people … I think it kind of shows the performativ-ism of our peers at times, and it’s just really upsetting to see all these people who were posting about it and saying how important it is and not being able to come.”

“I understand there was some confusion because it was previously on a Saturday and now it’s in the middle of the day on a Tuesday, but I wish there was more support here,” Saddlemire said.

Senior Luci Calvi also expressed her disappointment, “I’m actually very disappointed because I feel like this shouldn’t be something that can be, like, flimsy and just being pushed around because I feel like that’s exactly what administration is expecting and hoping for. They’re waiting for this to die down and waiting for people to forget about it so nobody has to answer the tough questions.”

One student, who wishes to remain anonymous, posted an Instagram story that expressed disappointment in students reposting “activism stuff” but not showing up to protests.

“What bothered me the most was the amount of people I saw on social media prior to the event show a lot of performative sympathy and not put their money where their mouth is, so to speak… Social media can be a great tool for promoting activism, but it only goes so far, the people’s actions need to back it up as well,” the student said.

“I don’t want COVID to overshadow our initial message,” said Poppenga, “and so, a lot of people are going to think different things of me and the other organizers, and campus in general with this cancellation.”

In response to claims of being “performative,” Poppenga said, “I guess internally, I know myself as a person and the other organizers know myself and others, and we know this isn’t just a performative thing. We know we’re doing this for the right reasons, and we really care. But people are going to have their opinions, unfortunately, and there’s not much to change that other than just continue the activism.”

Poppenga repeated, “But again, I’m not going to risk other people’s safety or the future of campus…I guess I’d rather have people think I’m doing this as a performative thing then for people to think I’m selfish for hosting an event, despite where we are with the pandemic.”

As of right now, there are no current plans to reschedule the protest. 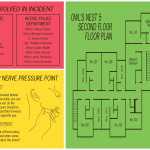 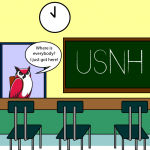