On Tuesday, November 17, Tom Cook, a film professor of film studies at Keene State College, hosted a Zoom conference call with American filmmaker Ken Burns, as well as several of his students to ask and answer questions.

“One of our favorite aspects is our ability to invite every week folks including graduates, lead film makers, and folks who are out working professionally,” said Cook. “Our guest tonight has been a constant supporter of the Keene State film program, providing our students with invaluable internship opportunities and hiring not a small number of them on post graduation. I am pleased to welcome our guest speaker tonight, Mr. Ken Burns.”

Ken Burns is an American filmmaker who is well known for his style of archival footage and photography in documentary films. Some notable documentary series include “The Civil War” (1990), “Baseball” (1994), “Jazz” (2001) and many more. He has earned two academy award nominations for “Brooklyn Bridge” (1982) and “The Statue Of Liberty” (1985). Burns has also won several Emmy awards among other notable honors.

Mark Gemplar, Internal Events and Scheduling Manager at Keene State College, took a role in the coordination of this meeting. He said, “The session with Ken Burns is part of a career development class that Tom Cook teaches for upperclassmen who are film majors. The purpose is to prepare them for getting their first jobs when they graduate and give examples of career tracks for the students.”

Gemplar also said, “Ken Burns’ session is one of many sessions on Monday nights this semester. The guests are friends of Tom’s in the industry and alumni of KSC. The COVID crisis probably allowed Tom to get a more diverse group of guests. Our guests have Zoom-ed in from L.A., N.Y. which wouldn’t have happened in the past.”

Efforts were made to get in contact with attendees of the meeting, however there were no responses. In addition, Ken Burns could not be directly contacted due to other reasons. 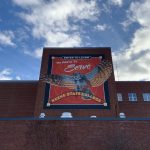