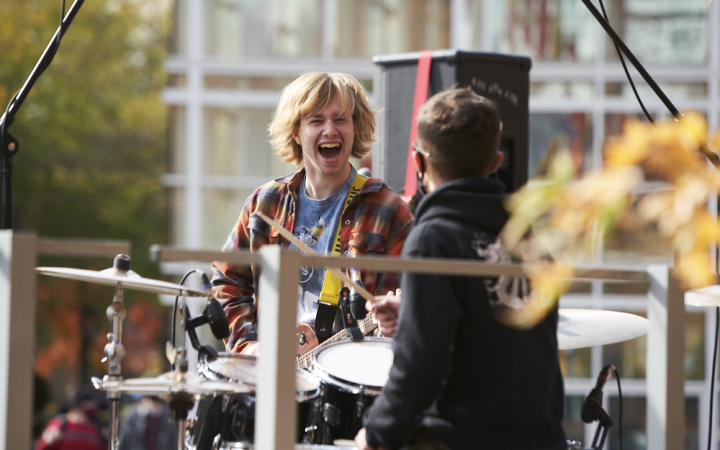 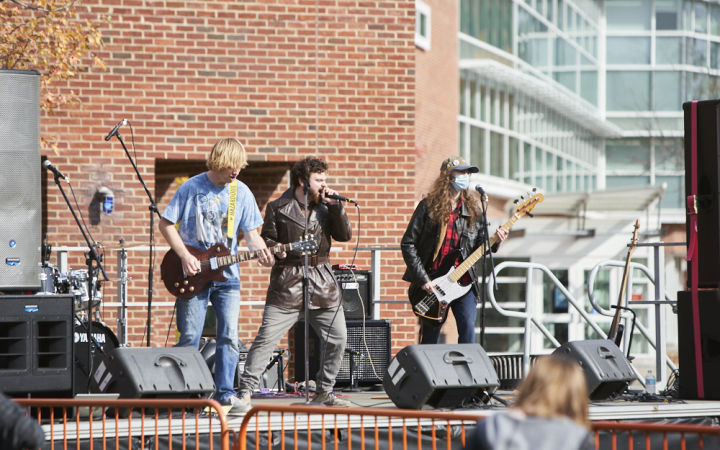 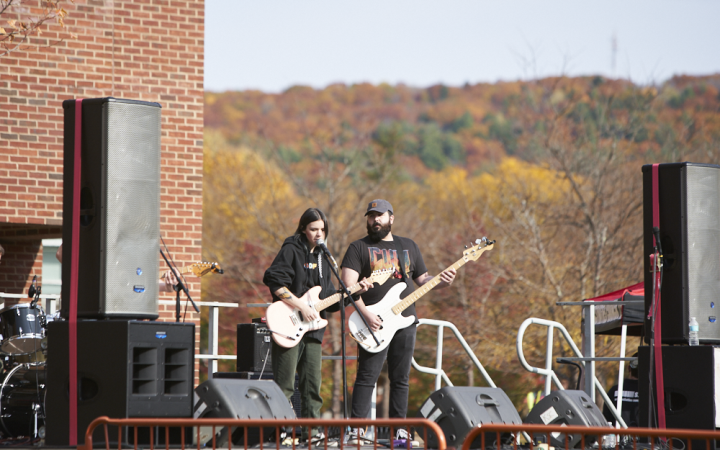 Every October the Student Activities Council (SAC) at Keene State College hosts one of the largest events on campus: Rocktoberfest. The event consists of free food and drinks, live music and the chance to connect with other students and faculty.  This year, three Keene State students who are members of the band Jailbait performed live on October 25 from noon to 3 p.m..

“Even with the risk of the pandemic, events are still being held on campus for students and faculty.” Atong Chan, KSC student and concert coordinator for SAC, explained why Rocktoberfest was still held. “The reason that we are having Rocktoberfest is that we planned on keeping events going even though there is a pandemic going on,” Chan said. “I think that it is important to give the students activities to do and the opportunity to socialize. This year has been hard on all of us and SAC has the resources to make sure students have fun which is necessary right now.”

There was a large turnout with a mix of students and faculty at Rocktoberfest. Senior Morgan Chantler was at the event and said that even given the pandemic, she had a good time “Everything was set up very nicely, with good spacing and the music was very fun,” Chantler said. “It was the perfect Sunday activity and a good COVID-friendly thing to do. The apple cider and donuts really hit the spot. However, I didn’t see any flyers or social media posts. I discovered the event walking through campus and caught the last hour of the show.”

Nate Nelson, a junior at Keene State who has played the drums for 11 years, was one of the three students who performed live. “I don’t think the event was hindered or anymore difficult considering COVID-19,” Nelson said. “I would have much rather had the crowd in front of the stage rather than the front section being fenced off. I felt like the crowd was widely dispersed which only gave a side view of the stage for a lot of people. However, we still had a tremendous show and the sound crew was on point and ready for anything thrown at them.”

Keene State senior Alyssa Taylor who sings and plays rhythm guitar is another band member. She said, “Rocktoberfest was definitely different this year and [I] wasn’t sure what to expect. To be honest, I didn’t think we’d have the festival this year, but it couldn’t have gone any better than it did. It was a little weird not having the audience directly in front of us, but we could still feel the energy and were able to interact with the crowd!”

Drew Sumner, a junior at Keene State who plays guitar and does vocals for Jailbait, was on stage as well. He said, “COVID-19 has definitely hindered people’s motivation to get together in groups and move to the music. But overall, it was still a great experience and it was awesome to see everyone come together to enjoy live music.”

Even though a large number of people attended the event, social distancing and masks were not a problem. Keene State has a strict on-campus mask ordinance and clear ‘X’ marks on the ground directing people where to stand while being properly social distanced. In addition, the band’s lead guitarist Hunter Pruett could not make it and was temporarily replaced with Zachary Dafeldecker from Hot Donnah.

“COVID did make the turn out less in general but I don’t think that that was an issue because it was to be expected. I am so grateful for everyone who came and I really hope that everyone had a great time which I think that we did. It was a success to me because everyone came out had a great time and people stayed the entire time so it was well worth it,” according to Chan. 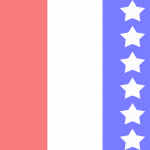 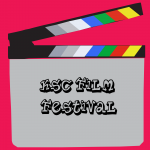