The Magic of Monadnock Colloquium: Poetry Bridging Continents, started building its bridge with its first event called The American Renga.

On Monday, Oct. 9, Keene State students and faculty members gathered with American and Chinese master poets in the Mabel Brown Room to write their very own renga poem. 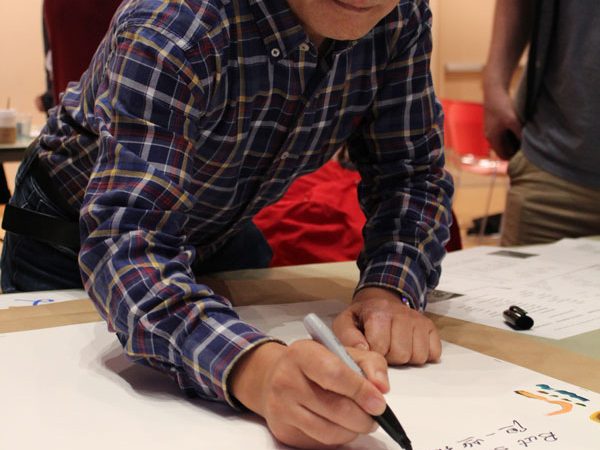 Renga is a form of Japanese collaborative poetry in which a group of people write a poem on a long sheet of paper. The poets alternate writing stanzas until the entire page is filled.

Event organizer and Journalism, Multimedia and Public  Relations Adjunct Professor, Rodger Martin, said the event adapts the renga to English. (It should be noted Martin is a Co-advisor to The Equinox.)

In Chinese, words are written top to bottom, right to left. Martin said the event fused English and Chinese writing styles by adapting the poem to the English writing style, right to left and top to bottom. Colorful three stroke glyphs were painted onto the borders of each stanza, and visiting Chinese poets traveled around the room to write stanzas in Mandarin.

“It brings two languages into one American renga,” Martin said.

The event started with a traditional Chinese toast led by Martin to honor imagination, the poetry and the art.

KSC senior Erza Richardson, came to the event with his entire Basic Chinese 101 class. He said his class was invited by Martin. “I’m excited, but it’s my first time writing a renga,” he said.

Yihai Chen was born in Dongtai, Jiangsu Province. He holds a Ph.D in comparative literature and is the professor and Dean of School of Chinese Language and Literature at Yancheng Teachers University.

Chen is a free-verse modernist poet and translator,  influenced by T.S. Eliot and Sylvia Plath. He writes in both English and Chinese, but learned English in the United Kingdom and began to translate his own poetry. He prefers to translate it himself because he said it’s easy to translate the language, but it’s hard to translate the culture.

“I am the master of my own poetry,” he said. “I know what’s easy to translate and what’s hard. I can translate creatively.” Chen said he must manipulate his translations to make them more acceptable and readable to the audience.

Chuan was born in Gaoyou County, Jangsu Province. He is a professional writer and poet, a member of the China Writers Association and the Vice-Chairmen of China Association for Poetics Studies. He writes in the styles of modernist and Chinese traditional poetry. His focus is in pastoral and rural life, and his works have been published in six different languages.

“It is very significant to have collaboration,” Chuan said. “We do not have enough translations of contemporary poets.”

Chuan said he wishes for more publications on both sides. “We know our poets, but we don’t know each other’s. With communication, more poets will be known.”

The rengas written during the event will be on display at the L.P. Young Student Center until Thursday. The poems will then be read to the public in the Marion Woods Room at the Mason Library at 2 p.m., and then will be put into the care of the Mason Library’s Head of Special Collections and Archives, Rodney Obien.

“We have a very large collection of poetry,” Obien said. “At the end of the week, the poems will find their way into the archive.”

Alex Fleming can be contacted at afleming@kscequinox.ccom

0Shares
0 0
Voices of Paris at KSC Previous
The Bandstand: Afterimage Next 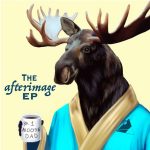