Affleck shines in “The Accountant”

While Ben Affleck turns in an exceptional performance, “The Accountant” loses its momentum toward a convoluted and sloppy second half.

More acquainted with numbers than social skills, mathematician intellect Christian Wolff [Ben Affleck] operates a low-key accounting office that mainly acts as a front for his side business, functioning with assorted criminal organizations.

When he takes on Lamar Black [John Lithgow], the CEO of an advanced robotics company, it captures the attention of Treasury Agent Ray King [J.K. Simmons] and analyst Marybeth [Cynthia Addai-Robinson]. When Wolff comes across some suspicious discrepancies, things start to go awry, forcing him to unleash an exclusive set of skills.

From winning Best Picture (“Argo”) to booking the role of the caped crusader, there’s almost nothing Ben Affleck do. Even though “Batman v Superman” left a bit of a sour taste in my mouth, he stood out as the diamond in the rough.

In “The Accountant,” Affleck further illustrates his evolution as an actor, as his performance is a strange hybrid of Jason Bourne meets Raymond Babbitt from “Rain Man.”

While most media would exploit Wolff’s autism as his prime personality trait, “The Accountant” allows Christian Wolff to embody a character. His interactions with others make for an engaging and surprisingly humorous performance. Because of his introverted nature, an unforeseen meet-cute between Wolff and Dana [Anna Kendrick] adds levity to his otherwise businesslike demeanor.

Throughout the film, there’s only one question on everybody’s mind: what is the accountant? A series of arbitrary flashbacks give some insight into specific stages over the course of his life, minus the context.

Despite a third act expositional dump, it blossoms more questions than answers.

I was so bewildered by his backstory (and the plot itself) that I had to read a spoiled-filled rundown afterwards. By the time I finished reading the piece, my head started to hurt because of its convoluted structure.

For the first hour or so, “The Accountant” locks you in with a fascinating character study of this gifted accountant/marksman.

A burst of humor brings an element of fun to some minimal yet truly brutal action sequences as seen through the eyes of cinematographer Seamus McGarvey.

But around the hour mark, this movie slams on the brakes. It can take either one of two exits, but instead, it patiently waits in the middle of the road, unable to make a clear decision.

With no path to take, the plot gets lost along the way. In any other action-drama, leaving open ends allows the viewer to fill in the blanks for themselves, but in this strange universe, there are some paramount questions that deserve some form of an answer, not sequel-bait.

Does this make “The Accountant” a bad movie? Not entirely.

Long after the film, Affleck’s performance still sticks with me, as well as Anna Kendrick’s and Jon Bernthal’s.

Aside from John Lithgow (who embodies one of the most worthless antagonists of the year), each performance is rock solid. They just deserve a better movie. 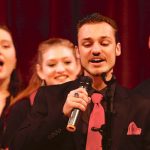 Chock Full O’ Notes sets the tone with a medley of... Previous
HOOTS N’ HOLLERS Next