Since our school year ended in May, two major violations to human safety hit the United States: the overturn of the landmark Roe v. Wade Supreme Court case and the Robb Elementary School shooting.

I, probably along with millions of other Americans, are sick and tired of watching the U.S. government fail its people.

Roe v. Wade, a historical landmark case in the U.S. Supreme Court, was overturned on June 24, 2022. Women across the country had their right to abortion stripped away without a say or a vote. The overturning of this case revokes a women’s right to safe and accessible abortions. Minors, children and survivors of rape and incest across the country do not have federal protection to choose what to do with a pregnancy that is a result of forced and coerced sexual intercourse. The overturning of Roe v. Wade will cause a drastic rise in dangerous abortions and pregnancy related death in states that make abortions illegal.

The Supreme Court’s decision to overturn Roe v. Wade is putting millions of women and children at risk if they cannot terminate an unwanted pregnancy. According to RAINN (Rape, Abuse and Incest National Network), one in six women has been the victim of rape or attempted rape.

Those people should not be forced to carry a pregnancy that is a result of rape for a number of reasons, only starting with the fact that it would be traumatizing. Women who, after having their own bodily autonomy taken away, would then be expected to host another person inside of them and then give a possibly traumatic birth. How anyone could validate not letting that person have an abortion, after they already lost the security of their body, is appalling and those people should be ashamed.

According to RAINN, females ages 16-19 are four times more likely to be victims of rape or sexual assault. At that age, they are ineligible to adopt children if they wanted one.I can’t imagine forcing them to carry an unwanted pregnancy would be any more ethical than sending a baby home with a 16 year old girl that just got her license.

Exactly one month prior to the Supreme Court ruling, a man armed with an AR-15 rifle entered unobstructed into Robb Elementary School in Uvalde, T.X. where he killed 19 students, two teachers, and injured 17 others.

Police officers waited 74 minutes to enter the building and failed to act on their shooting protocol, giving the shooter ample time to kill innocent children and their teachers. Texas officials shared after the shooting that there were reports about the shooter that showed mental health red flags that were ignored. In a report from investigators of the shooting, the attacker had an interest in violence and gore, offen watching and sometimes sharing videos of suicides, beheadings and accidents, and sometimes sent explicit messages to people online. He also had social media activity sending extreme threats that have been reported on the respective platforms but nothing was flagged by law enforcement.

It was a disgusting act of negligence from the Uvalde Police. The shooting itself was startling and vile, and is now the third largest school shooting in the country, behind the shootings at Virginia Tech and Sandy Hook Elementary School.

When is this country going to protect its people? The U.S. government doesn’t blink at giving millions and trillions of dollars to the military to protect us from other governments, but has no interest in allocating that money towards anything that will ensure our safety from our own government

The U.S. government’s reluctance to do literally anything about average citizens owning military grade assault weapons is appalling. The overall denial of mental health checks on weapon owners just shows that anyone blindly defending the Second Amendment doesn’t care about the safety of the people around them.

We have a young generation of people that are more in tune with their mental health than any generation before. It’s beyond me how we haven’t already pushed for expanded mental healthcare or normalized therapy, especially with continued access to assault weapons without so much as a background check to make sure that person doesn’t have a history of violence.

It makes me nauseous at how desensitized society has become to horrific events like these. Blatant attacks against women and children — and it just fades away into statistics and headlines.

I sit and write this article and can only plead that protecting human rights and safety becomes normalized in this country. In this post 9/11 world we live in, we are growing generations that have an increased awareness of the state of the world, including the lack of safety they have in school and their social lives. Choosing to have an abortion, or feeling safe during third grade english class, shouldn’t be up for debate. 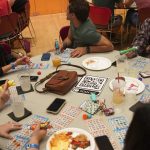 Senior Bingo Previous
Redfern fall season at a glance Next