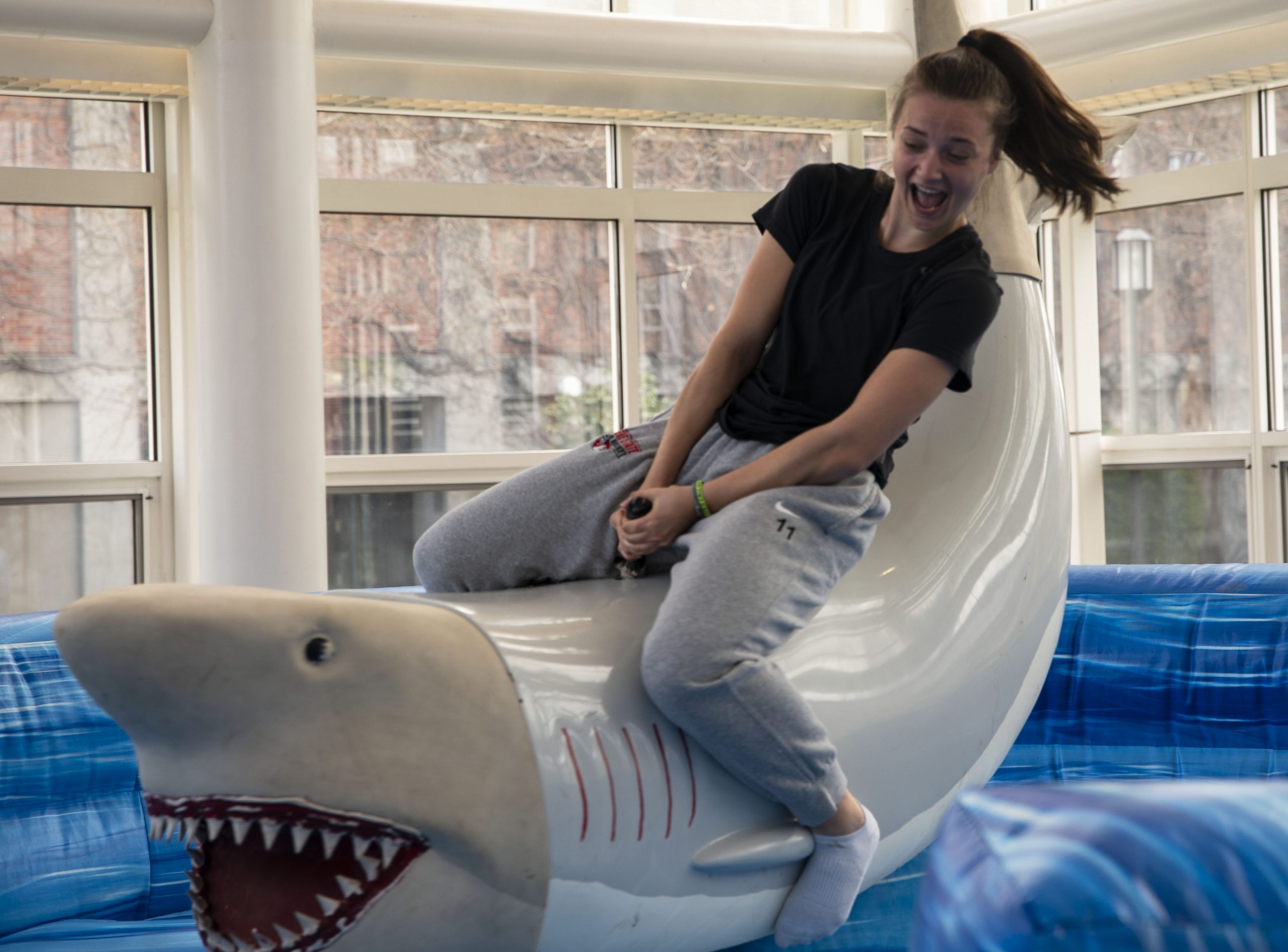 The Student Activities Council (SAC) hosted Spring Fest Bounce into Spring this past Friday, April 8. The event had glass etching, stuff-a-plush, free shirts, food and a mechanical shark, just to name a few.

The shirts were almost gone by 2 p.m., with size small being the only remaining size, and the stuff-a-plush was done by 3 p.m.

Keene State student Deacon Cormier said, “We came over for sizzlers and for stuff-a-plush, now that we are here, free shirts. Lots of cool stuff.” Cormier added, “I always come here for that (stuff-a-plush) cause it’s just an adding collection now.” He said he would like to see the mechanical shark make a return to next year’s Spring Fest.

Junior Emma Sonnati, another Keene State student, did not know Spring Fest was going on, saying, “I accidentally wandered into here.” Sonnati said her favorite thing at Spring Fest was the dinosaur stuff-a-plush. On what she would like to see return she said, “Definitely the shark thing (mechanical shark), this thing (stuff-a-plush), and the glass etching.” Sonnati said that Spring fest was, “A blast. It’s a vibe.”

Another Keene State student, Tobias Scott, said, “I was in the student center and then there were tables here and I was like, ‘What is going on?’ And somebody said it was Spring Fest; I got six dinosaurs.”

Keene State student Zach Murphy said, “I saw the posters. Came by and I got a Sizzler and then they were setting up, so we were like alright we’ll stick around. We saw the stuff-a-plush, we saw the options and decided we can’t leave without one of these.” Murphy mentioned his friend wouldn’t let him leave unless he got a whole bunch of them. Murphy added, “It was basically one thing after another. We’d see something get our attention, head over and so we’ve been here for like an hour-and-a-half now. It’s been a good time.”

Spring Fest is hosted annually by SAC. However, this is the first time it has returned since 2019. Social Activities Council Programs Assistant Casey Brown said it was, “The first one back,” and that they had plans for one in March of 2020, but due to COVID-19, it was called off.

Brown added, “Spring Fest is a sort of rebirth of an old tradition from SAC, which has been formally known as Keene State Calling.” She said, “It is usually a multiday program that has a variety of different things. Thursday is the live music in the Mabel Brown Room, Friday is all throughout the student center and Saturday is our comedian show, which is also in the Mabel Brown Room.” Brown mentioned that this was about the 19th annual Spring Fest, regardless of the name change.