Ever since the 2010’s, the superhero genre has been one of the most popular movie genres worldwide. Superheroes that were previously film-less are now getting the translation to the big screen.

Another sub-genre that became more well known was superhero satires, which satirized the tropes and formulas of the superhero genre. I have loved both superheroes and satire since I was very young, but for years I had a hard time picking out an absolute favorite superhero film. However, a 2019 film became a permanent favorite in the superhero and satire genres. It also used a superhero whose popularity was confined to comics at the time and had never been given a film adaptation. This film was: “Shazam!”

“Shazam!” is directed by David F. Sandberg with a story by Henry Gayden and Darren Lemke, with Gayden also writing the screenplay. The film is based on the DC superhero comic by Bill Parker and C.C. Beck. “Shazam!” features Asher Angel, Zachary Levi, Jack Dylan Grazer and Mark Strong in the lead roles.

Angel plays high school student Billy Batson. Billy has been in the foster care system since a young age, when he got separated from his mother at a theme park. Because of his poor treatment within the foster care system, Billy is not as trusting of others and frequently gets into trouble trying to find his mom. Even in his current caring foster family, Billy still pushes them away.

Things start to look up for Billy after a wizard chooses him as his champion and gives his powers to Billy. Now, Billy can transform into a superhero (who is a full-grown man played by Levi) by saying the word ‘Shazam!’ With the help of his hero-obsessed foster brother Freddie (Dylan-Grazer), Billy will learn how to use his powers while learning the true meaning of family and what it really means to be a hero.

“Shazam!” is a perfect superhero film. One of the best aspects of “Shazam!” is that every aspect of the film comes together to give it a fun, optimistic heroic feel. The cinematography, costumes, effects and music all work together to create the environment of a comic book hero. An example is when Billy is leaping off a building at night and transforming yelling ‘Shazam!’ While he is flying through the city, a viewer will only be able to think of a classic Superman building leap into the air.

Also, when Billy first hovers above the air, the music is so triumphant that it instills the viewer with the feel of a hero.

The comedy is also assisted by the cinematography, such as when Billy is buying a beer in his hero form, but a full shot is used to emphasize how awkward Billy makes the purchase.

In addition to being able to stand on its own as a superhero film, “Shazam!” goes the extra mile by also working as a superhero satire. Aspects from a hero’s powers to their living space (which is particularly hilarious when Billy and Freddy go to a realtor asking for a lair) and even catchphrases and traditional sayings are satirized (the line, “faster than a locomotive,” gets made fun of in particular for how dated it is). However, the most memorable satirization is of the villain speech in mid-air, which is clearly made fun of in Billy and the villain, Dr. Sivana’s final fight.

The best part of “Shazam!” are the messages it sends to the viewers. Having Freddy be the superhero expert and the one who trains him to use his powers is inspirational as he is a kid. In most films, one always assumes the adults are the mentors, but that’s not always the case. Freddy is one of the smartest people in this film and brings out the most good in Billy.

However, what is even more inspirational is Freddy is physically disabled, having to use an arm crutch at all times. Freddy as a character is empowering to people with physical disabilities as this film portrays people in the community as the kind heroes they are.

Also, the film provides an alternate narrative about the foster care system. It is usually portrayed as abusive and horrible on film. However, Billy’s foster parents and his siblings are all kind and care about Billy very much. This portrayal helps destigmatize the foster care system and sends a powerful message to the viewer that sometimes family isn’t found in blood relations, but rather it is found in the people who care.

“Shazam!” is a spectacular, fun film. It successfully functions as a regular superhero film while also satirizing the genre. The film also sends empowering messages and a very unique message about family. All of this plus super performances from Angel, Levi and Dylan-Grazer make this film worthy of a heroic viewing! 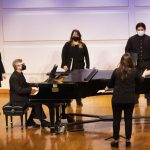