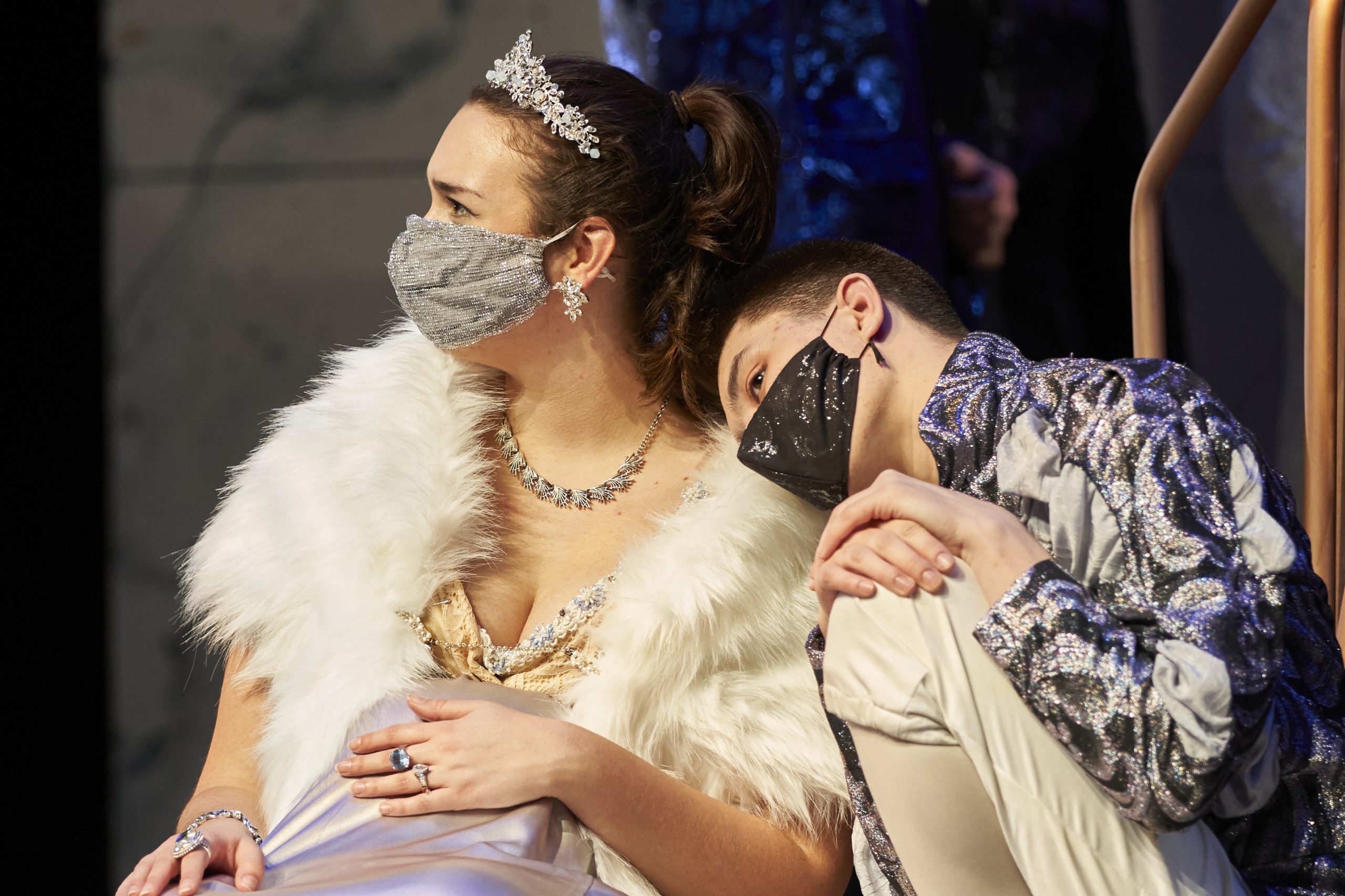 Senior Sean Gregoire performing as King Leontes in “The Winter’s Tale” in the Main Theatre. 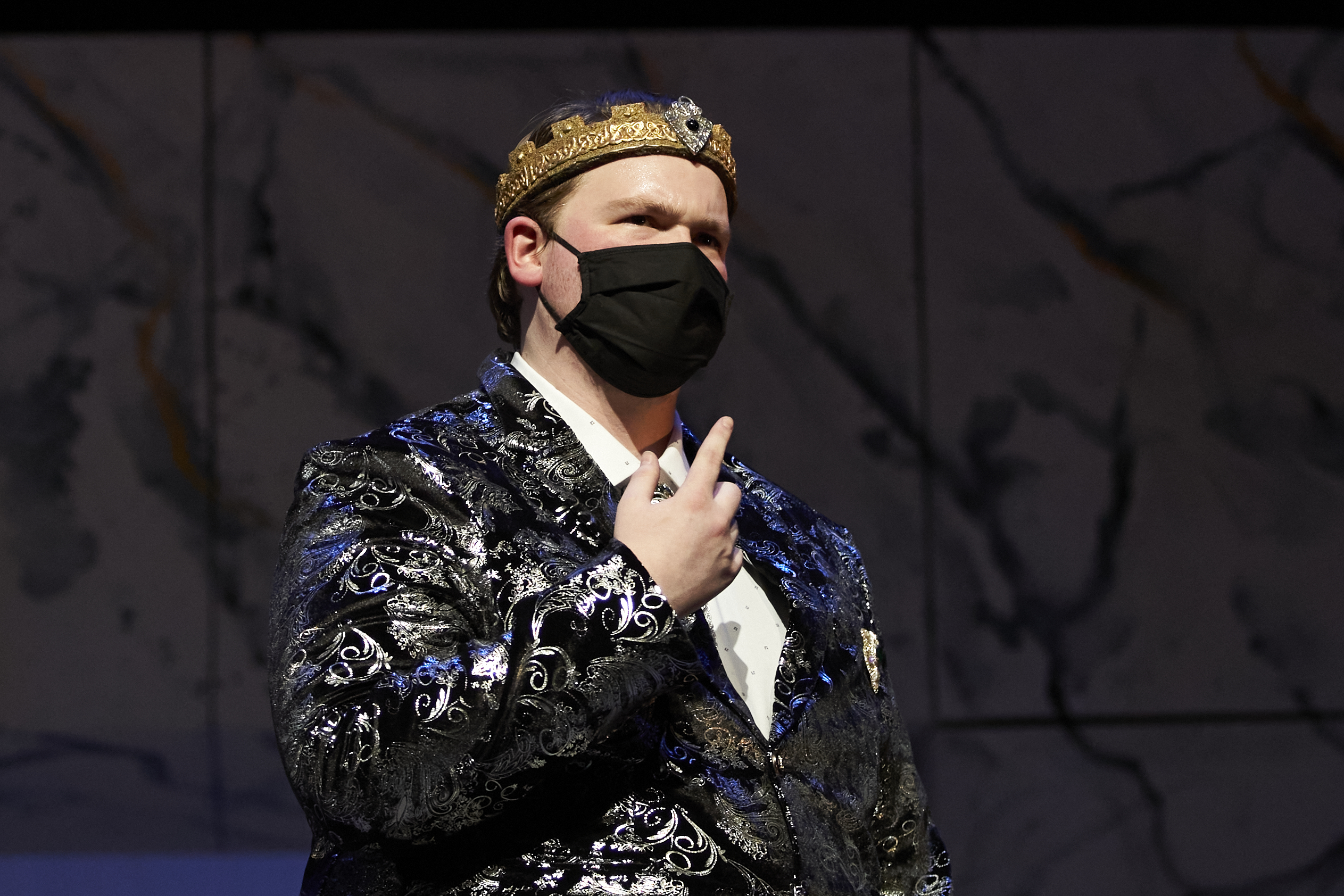 Senior Christian Frazier in “The Winter’s Tale” in the Main Theatre. Frazier played the role of Camillo, advisor to King Leontes and King Polixenes. 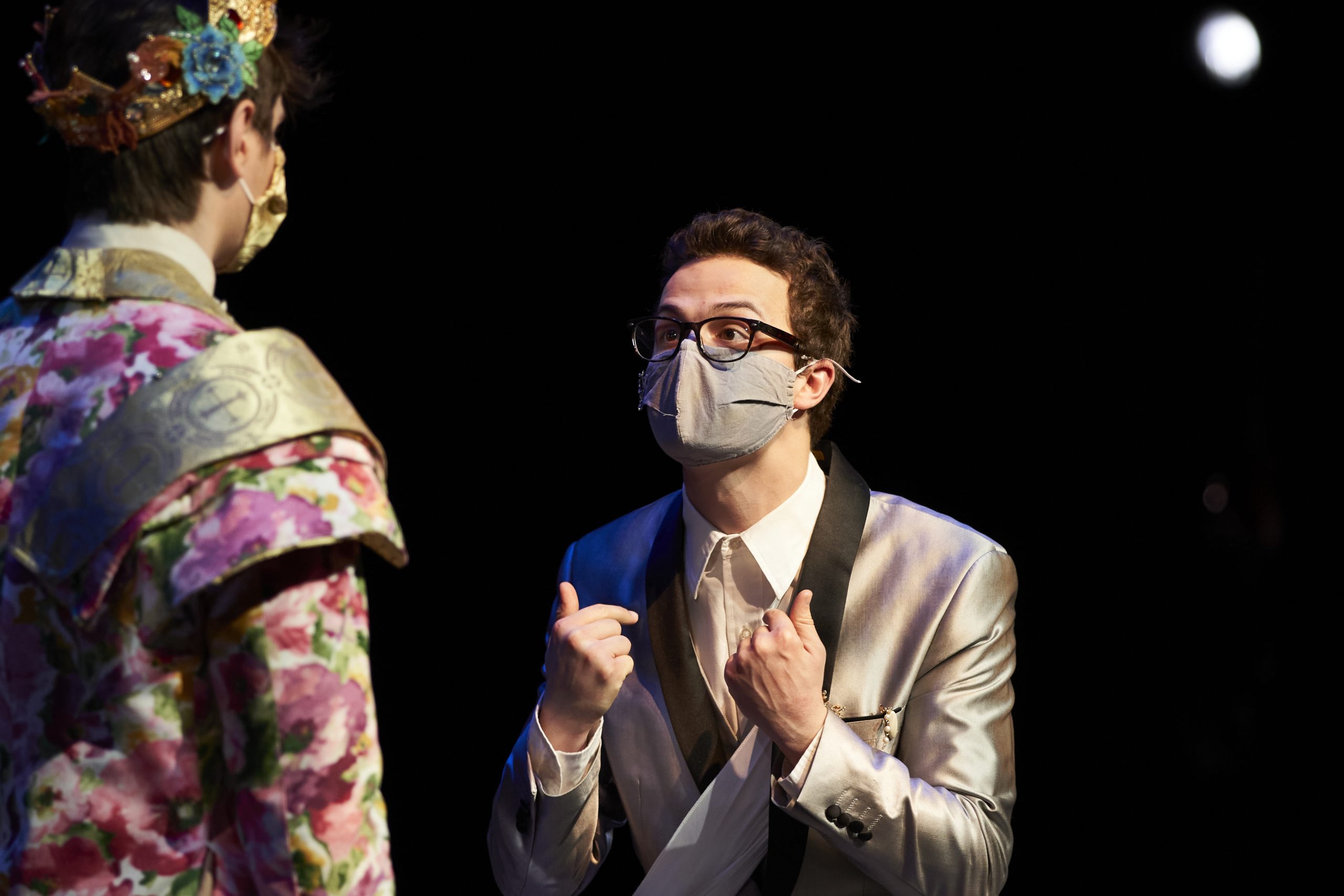 Junior Erika Walker in the trial of Queen Hermoine in Keene State Theatre and Dance’s production of “The Winter’s Tale” in the Main Theatre. 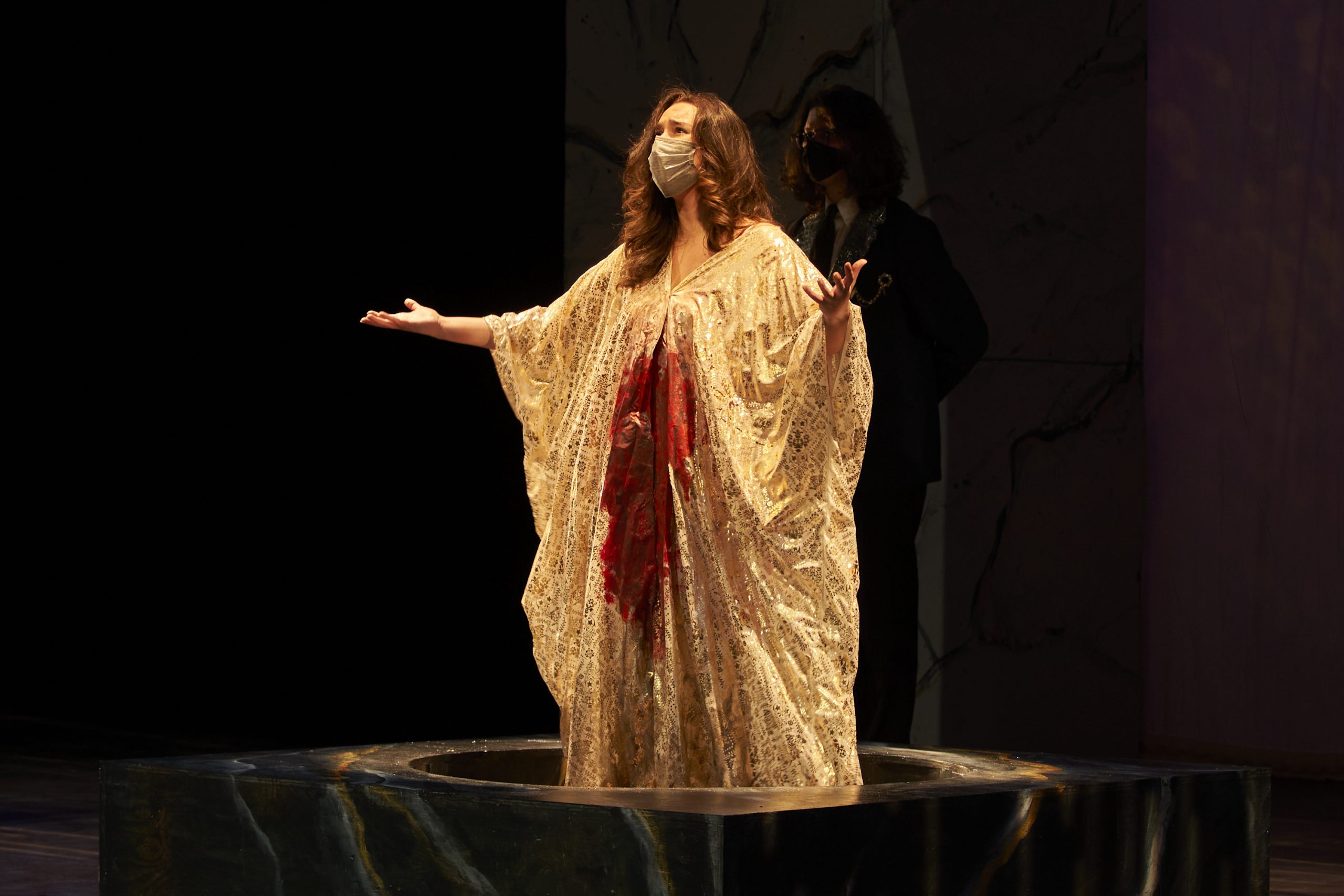 Senior Cassidy Doherty as Emilia in “The Winter’s Tale” in the Main Theatre. 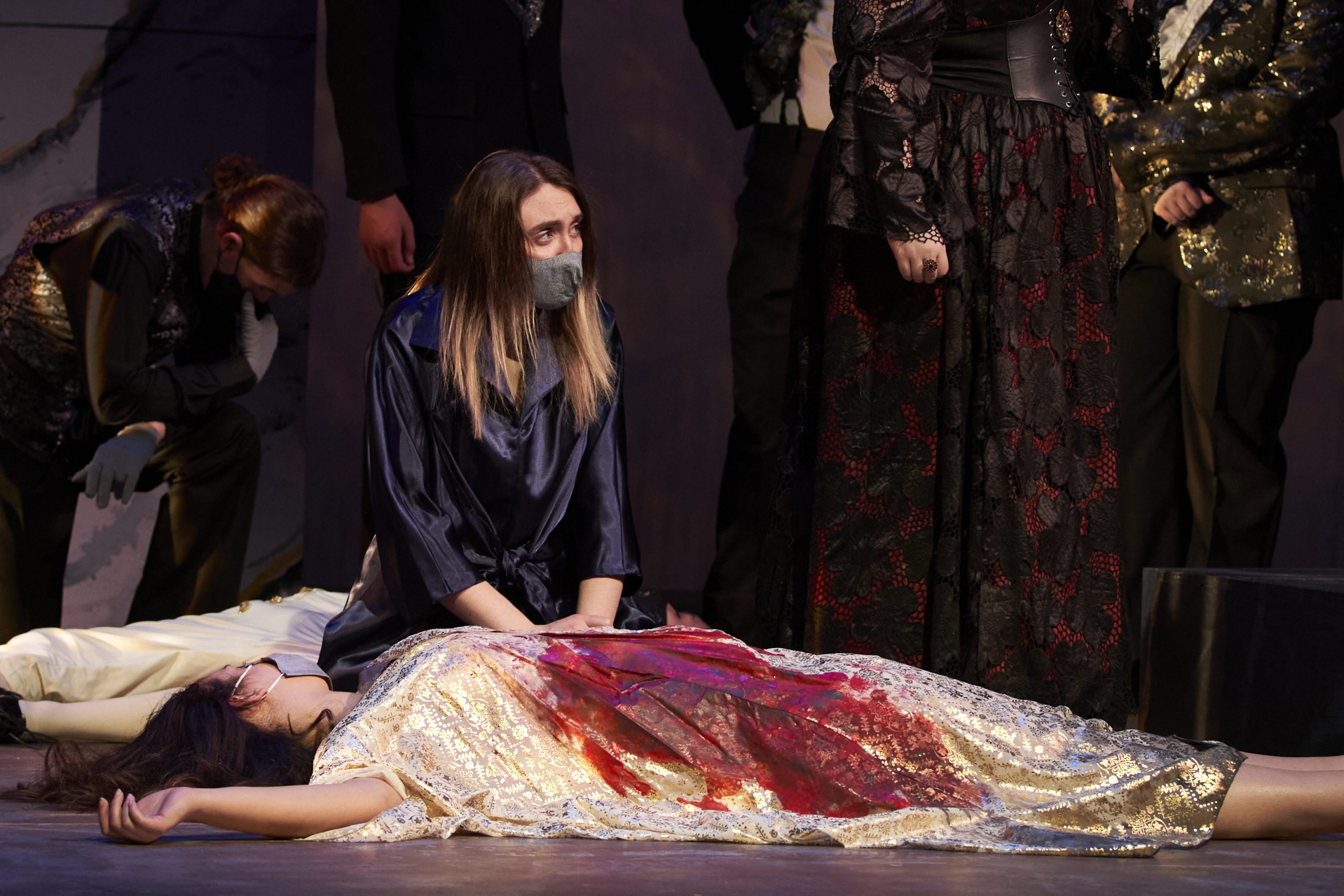 Junior Jayson Cassetta as Mamillius, son of Queen Hermoine, in “The Winter’s Tale” in the Main Theatre. 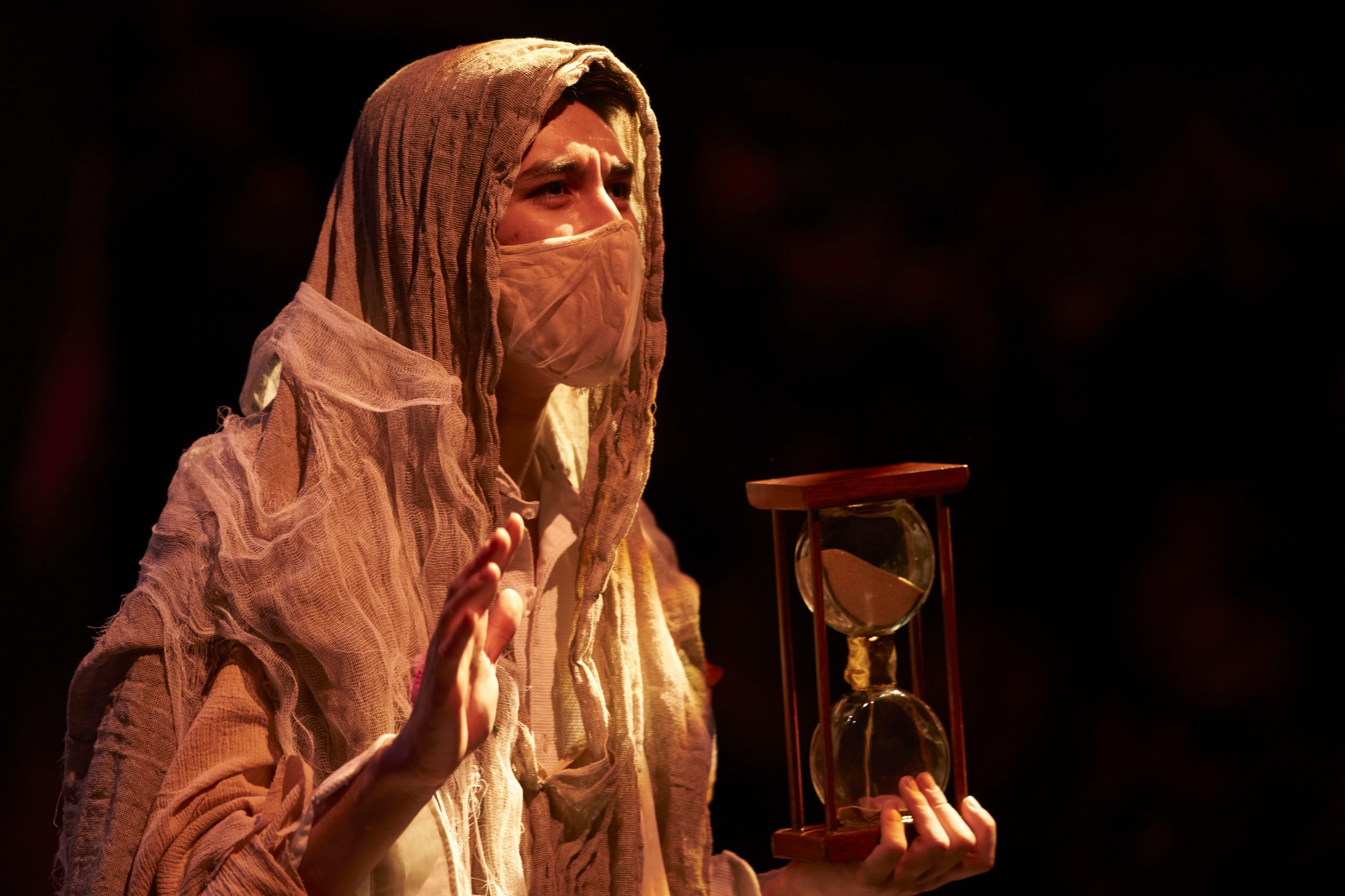 Seniors Madelyn Alter (right) and Cassidy Doherty in “The Winter’s Tale” in the Main Theatre. Alter played Pedita, the daughter of Queen Hermoine. 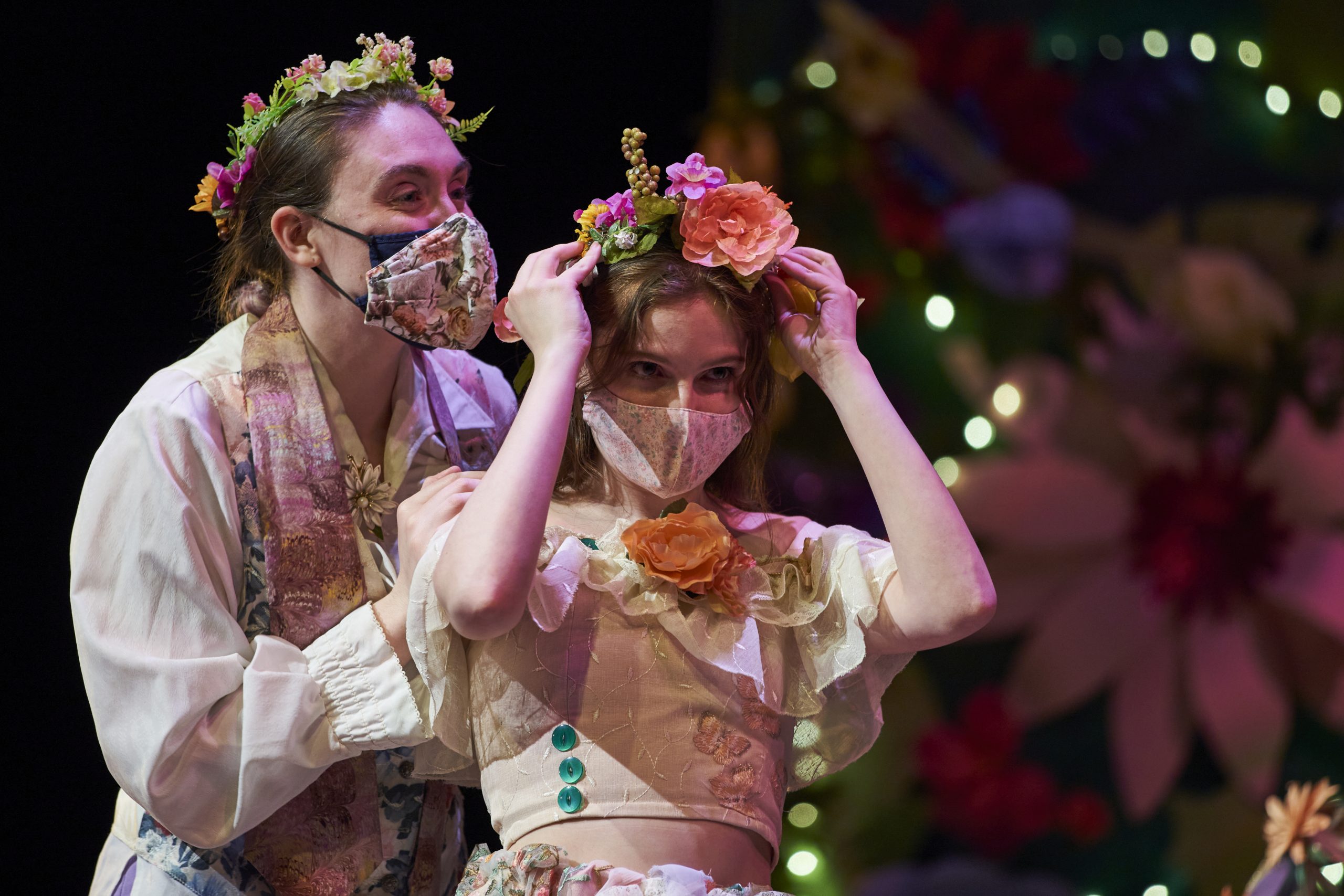 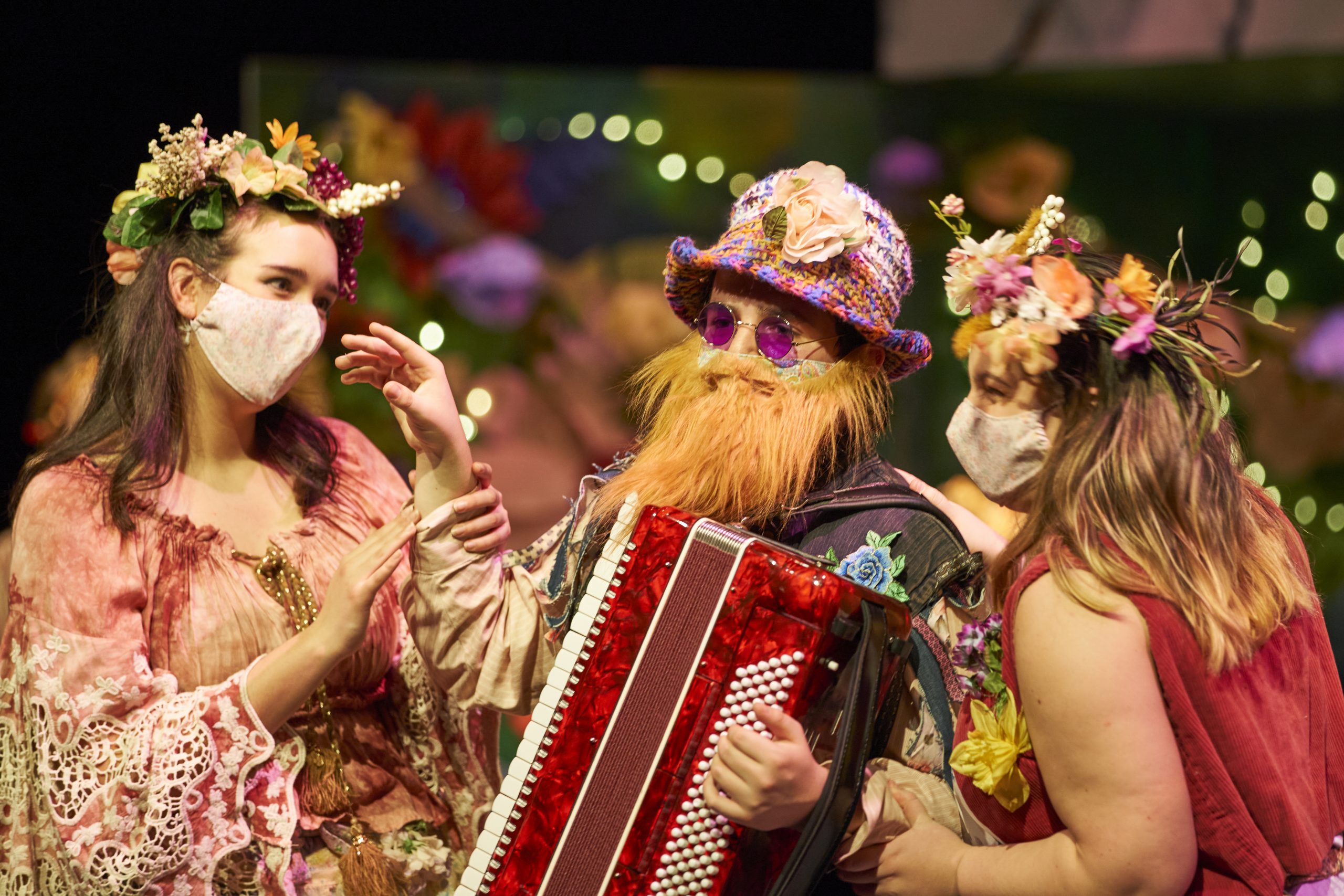 “It has all of the stuff that you would think of as Shakespearean,” Thomas said. “We’ve got death on stage. We’ve got songs, we’ve got kind of rogues and fools and thieves and we’ve got kings and princes and love and betrayal.”

Keene State Theater and Dance’s production of “The Winter’s Tale” held performances in the Main Theatre on March 2-5.

Written by William Shakespeare, “The Winter’s Tale” begins in the kingdom of Sicilia, ruled by King Leontes and Queen Hermione. When Leontes becomes suspicious that his wife is cheating with neighboring king Polixenes, he imprisons her. Hermione stands trial just after giving birth and dies at the end of the scene.

Junior Erika Walker, who played Hermione, said the trial scene was a highlight for her during the show. “That feels like my heart is on fire… It’s such an emotionally draining scene, but it’s my favorite one to do,” Walker said.

Despite the Shakespearean language, Walker said her monologue during the trial scene came naturally to her as she performed. “I think it’s so interesting that the words sound so fluid when coming out. I’ve never had a monologue like that, specifically Shakespeare, where it sounded so natural in my own voice,” Walker said.

Following the death of Hermione, the play skips forward 16 years to the kingdom of Bohemia. Perdita, the daughter of Leontes and Hermione, was abandoned there shortly after the death of her mother and has been adopted by a shepherd family, unaware of her royal heritage.

When Perdita falls in love with Prince Florizel, the son of Polixenes, it leads Perdita back to Sicilia and she learns of her heritage. In the meantime, audiences meet accordion-playing thief Autolycus and a bear.

This was accentuated through the show’s design elements, including scenic and costume design by theater and dance faculty Céline Perron and Calypso Michelet, respectively. Sicilia is shown with darker tones, whereas Bohemia is bright and floral.

Although “The Winter’s Tale” is an older Shakespearean piece, hints of today’s culture were seen in KSC’s production. Sophomore Steven Cere, who played Autolycus, performed three modern songs on the accordion throughout the show- “I Will Survive” by Gloria Gaynor, Abba’s “Money, Money, Money,” and “Just the Two of Us” by Bill Withers.

Cere said playing a comedic character was his favorite aspect of Autolycus. “Being able to be goofy, silly, and kind of just be myself on stage has been nice… It’s just been fun. It’s been really, really funny, and an overall really good experience.”

Thomas said putting modern twists on Shakespeare pieces is essential in making the material relatable and understandable to modern audiences.

“I love Shakespeare because the plays [are] 400 years old, but they have this thread of humanity that I think is really relevant now,” Thomas said. “I do think it’s important when we’re thinking about staging these plays to think about how do we make that immediate and relevant to a modern audience.”

Thomas continued, “We’ve kind of been thinking about it as a contemporary fairy tale. So a lot of the clothes seem very modern, a lot of the music is very modern, it really feels like it is almost in our world.”

Senior Christian Frazier, who played Camillo, advisor to Leontes and Polixenes, said Thomas created a space that gave the cast the freedom to explore their characters and the material.

“Michael was great at kind of inviting us to bring our own ideas to the table, and kind of allowing this open and creative space to…  share ideas [and] create ideas,” Frazier said. “He kind of invited this atmosphere where you felt like you could do no wrong.”

Although the show had to adapt through a rise in COVID cases and lost rehearsal time due to weather, Thomas took note of the cast and crew’s desire to move through the obstacles.

“Through all of that, I’ve been so impressed and excited with how much energy the cast and crew have put into this and how hungry they are to work on this,” Thomas said.

The cast consisted of students from a range of ages, as well as students from in and outside the theater and dance program. Cere noted the tight-knit bond of the cast.

“The cast is great,” Cere said. “I’m really glad all the people who auditioned and got in were those people, because they just attributed so much, each of them, to the performance.”

Frazier also said working alongside the rest of the cast was a highlight of doing the show. “For me, it’s bittersweet to kind of just see everybody who, regardless of it’s the major or not, everyone’s kind of coming together and putting on this rather difficult process of a show,” Frazier said. 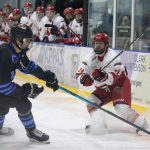 The Owls go down fighting Previous
Mask Policy Changes Next