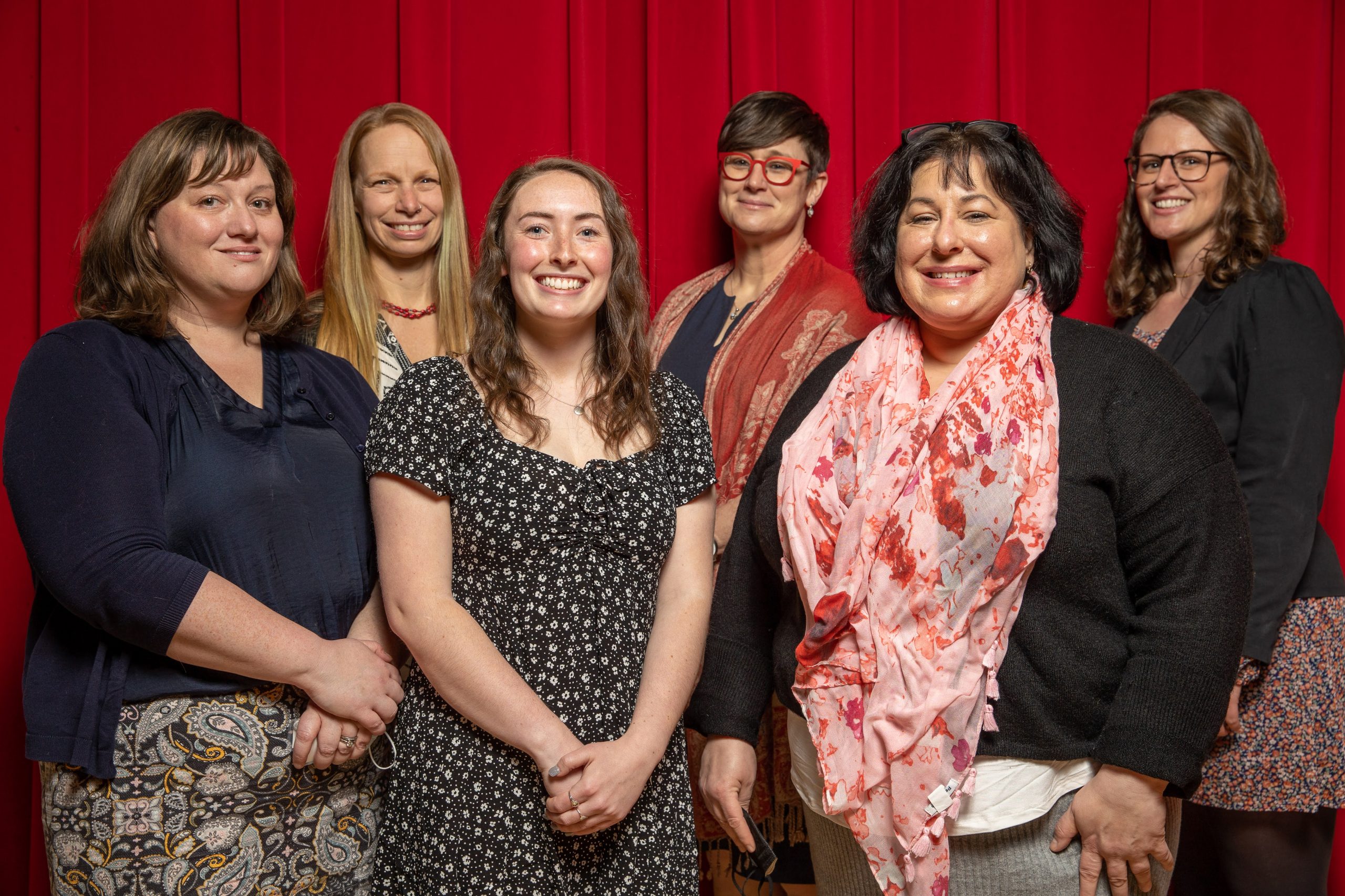 Six women won the Outstanding Women of New Hampshire awards, among them were two KSC faculty members and a student. The 32nd annual award ceremony was held Thursday, March 25 to honor those winners.

Dr. Dottie Morris began the ceremony with a brief introduction to ceremony. Morris said, “This year’s theme [of] providing healing/promoting hope is both attribute[d] to the ceaseless work of caregivers and frontline workers during this ongoing pandemic,” Morris said. She said it recognizes the countless ways that women have provided healing and hope in history.

The first award was handed to KSC senior Sara Getchell. Senior Lily Flynn nominated Getchell and introduced her at the podium. Flynn described Getchell as a hard worker. “Sara works hard to recruit students, many of whom say they’re looking to improve their social and mental health,” said Flynn.

Getchell is the vice president of the Education Honor Society, Kappa Delta Pi, and the president of the yoga and community service club. She has had an important role in organizing the Jesse Lewis Choose Love Movement at KSC, and has worked hard to be one of the top students in her class as well as help other students at the college.

Getchell said when receiving the award, “This award means so much to me not only because this is the first award I’ve ever won, but because it is rewarding to know that the impact I’ve made on the Keene community has led to a positive impact in others’ lives.”

The second award handed out was given to professor Dr. Jeanelle Boyer. Dr. Boyer was nominated by senior Melissa Ray, who also came up to the podium to say some words before introducing Dr. Boyer to the stage.

“Professor Boyer is passionate about the mental health of her students and the greater community. She is committed to investigating strategies to decrease prescription drug misuse and abuse on college campuses and in the management of mental health issues faced by college students during COVID,” Ray said.

Dr. Boyer is a public health professor at Keene State. She also serves as the co-chair of the KSC COVID Leadership Team, on which she helped reduce the spread of the virus by using wastewater testing to find the levels of COVID at KSC and in Cheshire County. This method was innovative in the assessment of COVID risk in the area before cases could be confirmed.

Boyer has also studied Food Protein-Induced Enterocolitis Syndrome (FPIESD), where she found a connection in the gut microbiome that could be causing FPIESD.

She came to the stage expressing how grateful she was to have won this award. “I’m so honored and humbled and just grateful for so much,” Boyer said. She then recited a haiku by Kobayashi Issa, reminding us that while things might not be great, there are still good things signified through the blossoms in Issa’s poem.

Khole, in a video presentation, shared that “[Curtin Pierce] played a pivotal role guiding the organization through unprecedented challenges using her data and analytical skills to assist her colleagues. Further, her expertise has been sought by Keene State College in formulating its COVID-19 response.”

Curtin Pierce was new to the medical center when the COVID pandemic began, but she was able to guide and prepare the organization through the pandemic. She helped devise plans that would limit the spread of COVID-19 within the hospital from the outside, and protect staff from COVID-19 infected patients.

She was also the recipient of the RISE to the Occasion Award or Resolve, Integrity, Sacrifice, Exceptional Service.

Curtin Pierce said, “I am truly humbled and thankful to be recognized amongst some of all these other awardees and I am grateful to have been able to serve this community as I have helped guide us through some very uncharted waters.”

The second Monadnock Region Award went to Tricia J. Zahn, Director of Community Strategic Partnerships at Center for Population Health at Cheshire Medical Center, a Dartmouth-Hitchcock affiliate. Before working at the medical center, she had worked all over the country. During the pandemic, she worked hard to keep the region prepared and was the lead in the vaccine effort.

Zahn as well was a recipient of the RISE to the Occasion Award.

Khole in the same video presentation said, “She believes strongly in tapping into the relationships and trust built among partners in bringing together persons, organizations and groups in viable and fruitful ways and most importantly in leaning their strengths during times when the larger community needs such combined energy and effort.”

Zahn stated, “I’m deeply grateful for all the partnerships that have led me here tonight. I’m thankful for all the businesses, schools, community civic groups, faith-based groups who opened their doors to host conversations and hold vaccine clinics. I would like to share this award with my team who stepped up and rolled with the punches from day one.”

The fourth award was handed to Kirsten Durzy, the equity subject matter expert for the New Hampshire COVID-19 response.

Durzy was nominated by Dr. Trinidad Tellez. Regarding Durzy, Tellez said, “She has tirelessly championed the needs of everyone, but especially disproportionately affected and historically marginalized groups.” Tellez also mentioned, “Ms. Durzy’s steadfast visionary leadership has also for over a year brought to life the mental, emotional and social health and healing in the community through an ethical storytelling project which she leads a passion project on her own time.” Information about that project can be found at www.ourstoryNH.com.

Durzy has worked to make sure nobody was forgotten during the pandemic, helping disproportionately affected groups and historically marginalized groups gain access to the vaccine.

Durzy said, “I am so deeply honored by this award and so proud to stand amongst these other honorees tonight.” She thanked her family, the college and gave special thanks to Tellez.

This last award was given posthumously to Donna L. Coty, who sadly passed away in Sept. 2021. This award was an additional award added to the event by President Treadwell to honor Coty. It is the highest honor that can be given to a faculty or staff member.

Coty was nominated by Dr. Melanie Adams, a professor of human performance and movement sciences, and Kirk Sanger, a professor of nursing. Sanger came to the podium to give a tribute to Coty but asked President Treadwell if they could do it together because it was difficult for him.

Treadwell, standing with Sanger, said, “She combined her immense talents, the technical skill to administer IV medication and compassion for others. Donna brought those talents and so much more to Keene State as our nursing coordinator.” She added, “She was and always will be an incredible light to this community.”

Treadwell and Sanger explained Coty would challenge her students with real-life simulations, to give students “typical day-to-day experiences.” One story was shared where she created a mock nursing home in the lab, and the “nursing home” was destroyed by a hurricane. Treadwell said on behalf of Sanger, “Students were amazed by the realism and remarked at how thoroughly Donna had immersed them in the environment.”

Treadwell and Sanger mentioned Coty also did her part during the pandemic by working with the rapid response team, helping with contact tracing and outreach.

Steven Coty, Donna Coty’s husband, came to the podium to accept the award.

He said, “She lived for Keene State, she loved it no doubt.” He then said, “On behalf of my daughter Jocelyn and my son Jameson, it’s a great honor to accept this award and also, we’re so proud of Donna because of the mark she left at Keene State College in such a short time is pretty incredible.”

When President Melinda Treadwell came to the podium to give her opening remarks she shared, “Tonight it is my honor to pay tribute to all of these women who we will celebrate this evening who’ve dedicated their lives promoting health and well being in small and big ways.”

After the final award was given, Morris came back to the podium to close out the ceremony. She gave her thanks to everyone who came and the people that helped set up the event. 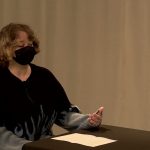 What's All The Hoot About? | Ep. 3 Previous
Redfern turns 40 Next