First Year Seminar (FYS) at Keene State is now two-years on from its inception. FYS is a weekly class that first-years at KSC have to attend. The program focuses on acclimating students to college life by providing info about on-campus resources and strategies for adjusting to their new independence.

Kristin Sweeney, the Executive Director of Student Academic Support Services, is a member of a committee of KSC faculty responsible for planning and implementing FYS, as well as other aspects of the first year experience, such as Welcome Days in August and June orientation. “We like to say that there’s an umbrella of a first year experience. And so you have your orientation activities in June, you have your August Welcome back days, you have a First Year Experience…and [FYS] is just one of them…This [committee] is the team of people who are tasked specifically with supporting the First Year Experience course,” Sweeney said about the role of the committee.

The FYS committee is responsible for planning all aspects of FYS, including class times and curriculum.

In planning out the course, the committee looked at what was already being offered at Keene in way of a first year experience, as well as what other school’s have been doing for their incoming students.

“With all the different iterations that have been on campus and the research that we’ve done of what other institutions are doing, we’ve been able to hold together a well-informed curriculum for students,” said Katie Robinson, the Executive Director of Aspire and another member of the committee.

The plan for the FYS curriculum is not set in stone, however, and the committee plans to keep adjusting it based on the preferences of students and faculty alike. “It’s evolved quite a bit as we get feedback from students and faculty and continue to look to our colleagues across the nation of what are best practices for first year seminars and what our Keene State students need. We’ve made adjustments and I think each year we’re happy with the improvements that are made,” Robinson said.

FYS classes are taught by faculty advisors from various departments on-campus, and KSC Orientation Leaders act as Teacher’s Assistants for the course.

Kristin Brooks, the Internship Coordinator for KSC’s career services, has been a faculty advisor for FYS both years that the program has been active.

“I’ve really enjoyed the opportunity to get to know first-year students and help them successfully transition to KSC academically, personally, and socially,” Brooks said. “Being an alum of KSC, I wish there was something like the FYS to connect me to resources and transition to KSC.”

Some students agreed with Brooks that the topics covered in FYS are important for new students to know.

Emma Wheeler, a sophomore who has been through FYS twice now, as both a first year student and an orientation leader, said that she found the course helpful. “I think it was helpful in the time of COVID,” Wheeler said. “Just because I was coming in and it was hard to adjust, being in a pandemic obviously.”

Although Wheeler had a good experience with FYS as a first year, she felt some aspects could have been better. “I felt like it could have been more helpful if I had OLs (orientation leaders) and advisors who were more excited to be there. “I felt like they were just making it a task, and not putting it all in. And that was really frustrating for someone who wants to be a teacher.”

Going back through the program as an OL, Wheeler found that engaging students isn’t always an easy task. “I think it was kind of split. Some of the students were super engaged, some of the students weren’t super engaged…it did vary by student.” As an OL, Wheeler also wished that some of the resources provided in the curriculum were less focused on lectures. “I wish they gave us a few more talking points about what to talk about, and some activities, because I didn’t want it to be me lecturing all the time, you know?”

Other students at KSC shared some of Wheeler’s points, seeing things they liked and didn’t like within the course. A first year student at KSC who asked to remain anonymous said “it’s a way to get information you wouldn’t seek alone because we were all newcomers, and some people just don’t like to do things alone…it’s nice because it does sometimes help you relieve some stress that happened during the week.”

Although Anonymous felt that FYS was beneficial in some ways, they went on to say that the class isn’t useful enough for it to be a mandatory course. “I personally did find it pointless just because it was a “class” for 50 minutes which didn’t really teach me anything and it was more of a talking class where we would talk about our week…I feel like it shouldn’t be required if it’s not really anything important for my major.”

Kristin Brooks acknowledged that it isn’t always easy to keep students engaged. “While the topics may not always be as thrilling, they are important and are critical when transitioning to KSC.”

Brooks said that one challenging aspect of her FYS course was the time. “It can sometimes be hard to engage with students at 10 a.m. on Friday.”

Brooks wasn’t the only one to notice that students have trouble engaging on Friday mornings. Ryan Cain, the head men’s basketball coach, who also serves on the FYS committee said that one of the biggest challenges in facilitating FYS is the timing. “The most challenging one that constantly comes up is just the timing of the seminar, and doing it in a way that is best for our students. Being able to right now offer it on Fridays, in some pretty specific time slots, may not be the most conducive to our students schedules. It may not be the ideal structure for it. But given our academic scheduling model, it’s been rather challenging up to this point to figure out the appropriate way to do it,” Cain said.

Luckily for students who enjoy sleeping in on Friday, the committee has taken the timing feedback into consideration. This semester they are running first year seminar courses on Tuesdays and Thursdays for a smaller number of incoming students, and students who need continued support into the Spring semester. This new schedule acts as a test pilot for the possibility of keeping FYS away from Friday morning in the future. “Our ultimate goal is to not always have it be a Friday morning, but to have a bunch of options spread throughout the week,” Robinson said.

While FYS might not yet be a perfect course, it will continue to evolve and grow as students give their input.

“I would just say that it’s a work in progress,”  Sweeney said. “You know, each of us [on the committee] have had students, a lot of us have taught in the first year seminar, and then had students come back to us and tell us very candidly what worked and what wasn’t working. And so we’re really listening to what our students are saying and doing our best to create a program that works for everybody.” 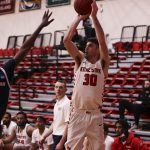