Comedy and the college experience

Released in 2012, the film is directed by Jason Moore with a screenplay by Kay Cannon. The film is based on Mickey Rapkin’s book, “Pitch Perfect: The Quest for Collegiate a Cappella Glory.” The film features Anna Kendrick, Anna Camp, Skylar Astin and Ben Platt in lead roles.

Kendrick plays a college freshman and aspiring DJ, Beca Mitchell. While Beca’s father works at her college as a professor, Beca is not exactly the model student. She is rebellious and would rather pursue her dreams of being a DJ instead of being in college. Life changes for Beca though when she joins the Barden Bellas, her university’s all-female acapella group. The rest of the film follows Beca and the rest of the Bellas as they strive to win the a capella championship, all the while getting to know one another and becoming a team.

“Pitch Perfect” is a film about college a capella groups. For that reason, it relies heavily on music, specifically a capella versions of songs. Luckily, the film is aware that it needs to be incredibly musical, as the music in this is incredible. All the songs are perfectly performed and choreographed. When the Bellas or Treblemakers, the rival male group, perform, the effort behind the singing and dancing is evident. Particularly both groups’ final performances are fantastic. Be prepared for excellent song mashups with spectacular, energetic choreography.

The comedy of this film is one of it’s greatest strengths. What makes this film’s comedy strong is the fact that there are a variety of comedy types being used. The humor can sometimes be verbal, such as in the exchanges between the competition commentators which range from sexual jokes to lampooning misogyny. The humor can also be gross out humor, which the opening of the film during the Bellas’ first performance makes evident from the beginning. The humor in this film is at its strongest when it is character-based. The majority of the humor is tied to the character’s personality. A great example of this humor is Barden Bellas member Lilly Onakuramara (portrayed by actress Hana Mae Lee), who talks in a barely audible voice throughout the majority of the film. However, when she sings at the end, it is heard by everyone.

While the characters are never seen attending classes, “Pitch Perfect”  understands what going to college is about. College is about meeting new people and making lifelong connections. When Beca and the Bellas first meet, they all seem very different from each other. However, like in real life, they soon begin to open up to one another and embrace each person for their unique voice and find common ground. This is exactly what college is: different people coming together through exposing their true selves, and each person being valued for who they are.

Both Beca and Camp’s Aubrey (the captain of the Bellas) exemplify the growth that students experience during college. Beca, at the beginning of the film, was someone who pushed others away. However, through being in the Bellas, she learns the importance of friendships and letting people in.

Aubrey, similarly, learns through being in the group that being a leader is about including everyone’s voice and not just her own. It is more than metaphorical that during the first Bellas performance the harmony sounds disjointed and by the end all voices are synchronized and working perfectly together.

“Pitch Perfect” is one of the greatest comedy films ever made. It mixes music with comedy perfectly, and offers multiple different types of humor that further character development. It is also natural that “The Breakfast Club” is referenced so much in this film, as much like that film, “Pitch Perfect” is about embracing uniqueness and finding common ground with others. By including these themes of teamwork, it becomes an allegory for college. All of this and great performances from Kendrick, Camp, Astin and Platt make “Pitch Perfect” a harmony worth singing. 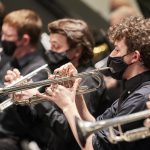