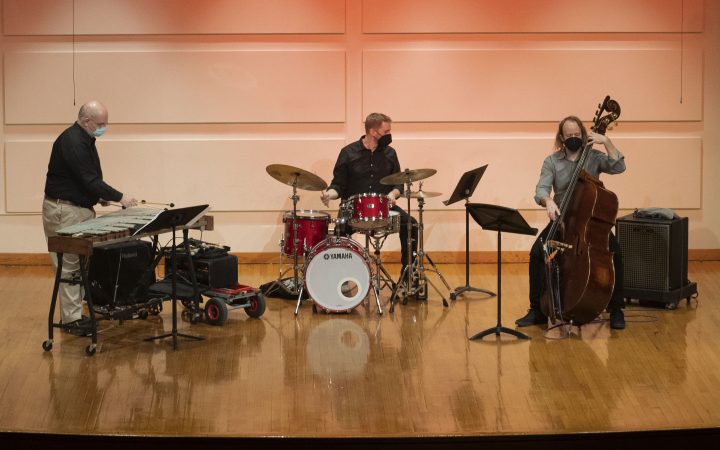 This year marks the 20th anniversary of the faculty composers recital tradition at the Redfern Arts Center.

In continuation of this tradition, the Faculty Jazz Trio performed a concert of original compositions on January 26 in the Alumni Recital Hall. The trio consisted of KSC faculty members Steve Cady, James Walker and George Robinson.

All nine pieces showcased in the recital were original compositions by Cady and Walker.

Due to varying writing styles between the two composers, Cady said the combination of his work along with Walker’s made for a well-put together program.

“Jim and I have slightly different approaches to writing, stylistically and sound wise. And I think that those two approaches complemented each other pretty well in the program,” Cady said.

Walker said the program, by chance, featured a wide range of styles under the jazz umbrella. “We didn’t really plan it this way…but we covered a pretty broad variety of one of the styles you’re going to find in jazz, which was a very happy accident for this program,” Walker said.

Each of the pieces showcased in the performance were examples of jazz standards. Cady said this format allows the pieces to be played easily by any jazz musician.

“We make a piece of music that can and should be played by any interested jazz musician,” Cady said.

Cady premiered his piece titled “Mr. E,” which had never been performed in its entirety before the January 26 recital.

“Including with the trio, that piece of music had never been played through [from] start to finish as it were until that night in that moment. So that was cool for me,” Cady said.

The title of “Mr. E” is a variation of the word ‘mystery,’ a nod to the piece being built around the key of E. Cady and Walker both noted that particular piece as being a standout for them while reflecting on the performance.

“We really seemed, I think, to connect on that, and interact well as a trio on that song, especially,” Walker said.

Other titles from Cady’s work featured in the program include “You’re It,”  “Bon Dame” and “Color Between the Lines.” The latter of which closed out the performance.

While introducing his ballad “Don’t Go,” Walker referenced a quote by Robert Frost in which Frost was asked to explain one of his poems. Paraphrased, Frost said to read the poem again and let the words speak for themselves. Walker equated this to the experience of listening to music.

Walker elaborated further, “We could talk about the kinds of chords that are involved, the kinds of style of music that’s involved the influences, but after a certain point, you want to just listen to the music. Each listener has to let it hit them its own way. Different people will respond to the same music, even the same performance, in different ways.”

While addressing audience members, Cady said the trio met recently. However, Cady noted that there was immediate good energy between the group.

After knowing Cady for over a decade, Robinson described a certain comradery that contributed to the performance.

“He’s the only bassist other than my twin brother Chris… that I feel as if we can read each other’s minds when playing together,” Robinson said in an email interview. “The “behind-the-scenes” information I get from him makes his music that much more interesting to me and I really enjoy playing it.”

It was also the trio’s first time performing together. “I hope that Steve and George and I get the chance to play, if not this exact material, more material in the future,” Walker said. 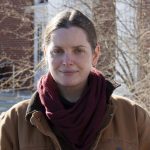