“We spend more dollars on running the college than we do teaching and supporting students; we have got to reduce our administrative costs,” KSC President Melinda Treadwell said.

Treadwell said that KSC has reduced administrative faculty in other departments already, including at the cabinet level and with merging the Student Affairs and Enrollment departments.

Treadwell said that in meetings with faculty going back to 2018, she has said that KSC is too “administratively heavy.”

KSC Provost Dr. James Beeby said they are looking at a way in which KSC can run academic support in keeping with students’ needs. “How we can do that in a way that sort of releases faculty from the sort of administrative workload that they have, and allows them to be more present in the classroom,” Beeby said.

Treadwell continued, “And so we reduced from three to two schools in that first year. And then we’ve talked about, should we just be one school? What is the chair structure?… What do we need? What’s the right structure? How do we privilege the academic enterprise? How do we reduce administrative costs and recognize the disciplinary leadership that we have to have as a campus?”

Beeby asked similar questions. “Given the curriculum that we deliver and the programs that we have, could there be some combining of departments perhaps, or not?” Beeby said.

Treadwell discussed the possibility of joining schools together. “What I’m imagining is [Beeby] will have a school or a department structure that recognizes our disciplines. We’re going to bring together some of our smaller disciplines into departments that make sense. So we’ve been discussing this; these aren’t the super departments, we’re not having one or two super departments under different school structures,” Treadwell said.

Treadwell said that the end goal is that students can see their department’s leadership. Also, faculty can see that they have “a direct line to the provost without a lot of middle movement.” Treadwell continued, “We have a way to think about balancing the workload so that people aren’t exhausting themselves with administrative responsibilities. So it all connects I think into a more organized whole.” 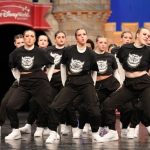