New changes will be coming to the Redfern Arts Center in the coming year.

As announced at the Student State of the College address on November 30, inactive and abandoned buildings on campus will be torn down in Spring/Summer 2022. This includes the Bushnell Apartments, which have been unused since 2017

KSC President Melinda Treadwell explained that the Redfern Arts Center will be renovated, as it has been needing renovation for awhile.

“We have some money that we’ve put into the budget to support this was part of our NASM [National Association of Schools of Music] or music accreditation last year, and review by the fre marshal of some of the life safety code and other issues, so we have to put some resources there. So we will start that this summer,” Treadwell said.

Treadwell explained that due to Bushnell Apartments being brought down, an outdoor amphitheater will be constructed in its place.

The Bushnell Apartments will be torn down in the Summer of 2022.

Caitlin Howard can be contacted at a.e@kscequinox.com 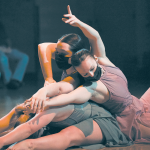 Choreography Showcase Previous
Looking ahead to Spring 2022 Next