Junior Jaelin Jang posted one of the fastest times in Keene State history in the 200-meter butterfly event in a meet on Saturday, November 13.

The Fall River, Massachusetts, native got her start in swimming at the age of 12. As some athletes experience, Jang has had some setbacks in her athletic career. “There was a time that I just wasn’t getting faster, but I feel like my coaches really helped me get over that. I think that was more mental than a physical thing that I had to overcome.”

When recalling her first athletic success, Jang said, “I remember being really happy, like I couldn’t believe I did it. It was to get to a meet that I [wanted to qualify and] qualified for, and I watched everyone else qualify, so I thought it was a really good feeling.”

There are many inspirations for college athletes, but for Jang it’s the support from her family that keeps her going. “I think there’s a lot of people that inspire me, but definitely my parents. They come to all my meets, and they cheer me on. They always tell me I do a good job even if I didn’t!”

Competing for Keene State was the right choice for this speedy swimmer. When asked why Keene State drew her in, Jang said, “I love the environment. I remember coming on my college tour and watching one of their [swim] meets and they were having such a fun time, and I wanted to be a part of that.”

Asking about her goals, Jang said she doesn’t really have any except for simply continuing to improve. “I want to keep going further,” Jang said.

Carey said that Jang is as determined as ever. “Ever since her [first] year, she has been one of the hardest workers on the team consistently,” she said.

Swimming and diving head coach Chris Woolridge said, “Jaelin’s work ethic is excellent, if anything she might be a little too hard on herself… the kind of student you really hope to be able to coach.”

Carey said that having Jang as a teammate is enjoyable. “She’s very caring and very willing to listen, rather than just giving her opinion on everything. She really cares for everyone on the team.”

As team captain, Carey has hopes for Jang for the remainder of this season. “She was ‘[Little East Conference] Rookie Swimmer of the Meet’ her [first] year, so that would be cool if she could get ‘Swimmer of the Meet’ again, because all of her hard work would pay off,” she said.

Woolridge said that Jang is a real team player, and that she is a talented and versatile swimmer. Coming into the team, Woolridge said that Jang was put in positions that were not her natural talents per se. “She kind of happily accepted whatever we needed [at the time] and is now on a path that better suits her strengths,” he said.

“She is somewhat quiet, but certainly leads by example. I think what she brings to the team dynamic is somebody that works hard, that is a good example of what we’re looking for as far as what happens in training. She races hard, she shows up on her race days, so she is really a leader by example and does an excellent job at that,” said Woolridge.

Woolridge said he would describe Jang as either tough or focused, “…they’re both components of what allows her to be who she is when she races.”

Phil Racicot, Director of Athletics and Recreation at Keene State and Chair of the Little East Conference Athletic Directors Council Executive Committee, said, “We all knew, coming in, that she was a really strong swimmer and tough competitor. She’s off to a great start this year, and between her and her teammates, if they keep this up, we’re going to have to get a new record board in the pool. That’s a good problem for us to have. Chris [Woolridge] does such a good job with identifying students that are going to succeed here at Keene State… Those kinds of efforts that are being made individually obviously make our team look great, and it is good to see students be recognized for their level of excellence. In sports like swimming, where we have a high degree of success, we really want to start working toward ‘How can we have more success beyond the LEC level?’ [into the level of professionalism such as the National Collegiate Athletic Association]. I think Jaelin has a really good opportunity to do something like that.”

If Jang could say anything to future incoming athletes, she would tell them, “Just keep trying… and always listen to your coaches because they always want to help you improve.” 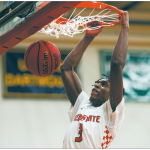 A slam dunk for KSC Previous
Postseason awards Next