What does Thanksgiving mean for athletes?

With Thanksgiving on the horizon and winter and late fall sports in full swing, student athletes may have some work to do along with celebrating this coming holiday break. The swim team is no exception to this, despite access to water possibly being limited.

Tyler Young, the captain of the men’s swim and dive team, said, “He’s [the coach] definitely expressed what we want to achieve post Thanksgiving break… it’s the expectation that everyone puts in a little bit of effort outside of the semester even though we’ll be home with our family.”

The training the athletes do is decided by their coach, even while they’re off campus.

“Usually it’s split up by what training we’re doing, based on different strokes but it can kind of vary from year to year. He [the coach] may have us just do a similar workout just so we’re all on the same page moving forward,” Young said.

As for how he thinks this break will affect the team, Young said, “In a normal year we always have this break so I don’t think it’ll necessarily have a negative impact on the team.”

While on campus, the athletes put in a lot of time together to be the best they can be. Tomas Langland, a senior athlete on the swim and dive team said, “We practice everyday except Sunday usually so, quite a lot.”

Workouts here on campus vary depending on what the team is working on at the time. “We swim like five or six days a week, sometimes we’ll do doubles, and we’ll lift between three and four days a week and some of the swim practices are broken up into special things where we’ll do stuff called power…so we’re doing like weighted swimming and things like that…not only swimming,” Langland said.

Langland feels the team could use the upcoming break “Luckily for us that time comes right when we’re supposed to rest for a big meet that’s coming up so the break is actually at a perfect time for everyone’s training program.”

The women’s swim and dive team also works hard over their season as a team to keep themselves in competitive order. Team captain Paige Carey said their training schedule for the most part lines up with the men’s team. “As a team we train Monday through Saturday, and Saturday is usually our meet days, and we usually have an average of two doubles [two practices in a day] a week… We go full-team Mondays, and sometimes Saturdays we don’t practice but other than that we’re kind of split up based on our school schedules,” Carey explained.

In terms of training for the women’s team, “We’ve been weight training, prioritizing weight training this season compared to the previous seasons so we lift three to four days a week… and then we do a lot of power work… you just pull weight across the pool,” Carey said.

Carey says her solo training sessions are also limited, “I wouldn’t say much training on my own while we’re at school but mainly keeping myself healthy, like staying away from someone that’s sick, making sure I’m eating the right foods but when we’re not at school I mainly weight train throughout and stay on that schedule.”

Their training regimen for the duration of the upcoming break is planned out before they leave. “By ourselves, our coach usually sends out weekly workouts. He’ll send us pool workouts almost every day that we’re home, but when we come back we’re going to be tapering. We’re going to be shutting down, getting ready for our big MIT invitational meet so I bet he’s going to try just to keep our cardio up and weight training up.” Carey acknowledges some of the complications of COVID restrictions that may hinder the training over the break however she does think this time off will be good for the team in a way. “For the team morale, I think it’s going to be a healthy break because we’re together every single day and even when we’re not training together we’re at the DC together so I think that way it’s a good break.” While Carey does believe this break will be good for the team, she also believes that COVID-19 and it’s resulting restrictions may have an impact on their training. 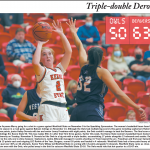 Triple-double Derosia Previous
History in the making Next 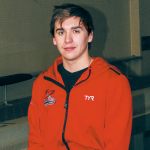