What are the clubs up to? [Rugby]

The men’s club rugby team played their first game in over a year at the start of this fall semester. The team made a strong return, winning four of their seven matches so far this season.

Ely Thayer, the head coach for the club rugby team stated that more than 80% of his team this season didn’t have any rugby experience due to the COVID-19 pandemic putting a halt on many athletic schedules. He explained that this “rookie status” was shown in their first game of the season when they lost to Babson, but Thayer goes into detail about how the team is doing now.

Thayer also explained that everyone on his team has been a key player this season since there are so many new players and everyone needs to step up. Owen Pica and Evan Davidson are some names that Thayer threw out as people who are older and have more rugby experience, but at the end of the day, Thayer explained that every person on his team has stepped up and done their part and is part of the success.

Thayer also explained that there are many players on the team who are in ‘blue-collar majors’ such as safety and construction and this contributes to the team dynamic. He explained that his team is not afraid to come to practice and get their hands dirty and work hard. When he gave one word to describe the team’s dynamic, Thayer used “resilient” to explain just how hard this team is working to accomplish their goals.

When it comes to goals, Thayer explained that they didn’t set a goal to win a certain number of games. He wants his team to “work to be better at every practice than you were the last” and said that if they can accomplish this goal, then that is what is going to help them be successful.

Jason Perry, the president of KSC men’s rugby gave some more names of players who have been especially helpful this season including senior captain Matt Barriga along with some rookies starters on the team. He explained that they are all putting in the work, stepping up and doing well this season.

When talking about the team dynamic, Perry explained that they are all friends and hang out both on and off the field.

“Like we eat lunch together, we eat dinner together mostly and stuff like that. I think we’re all pretty friendly with each other,” said Perry.

A goal for Perry was keeping up practice numbers. Since there weren’t any games, many people weren’t showing up to practice.

“Last year during COVID since we didn’t really have any games we were getting like 10 people, like eight people per practice and we really wanted to keep our practice numbers high like even if we didn’t have games or anything like that, and we’ve done that pretty well. We usually have a consistent of like 22 guys, a practice like minimum.”

Matt Barriga, a captain on the team, explained that playing with confidence has some room for improvement. Barriga explained that since most of the players this year are new and have never played a game before and doesn’t know much about the sport, it is hard for them to play confidently. He went on to say that once they better understand the game, he believes they will all be talented players.

0Shares
0 0
Strong season opener Previous
What are the clubs up to? [Hockey] Next 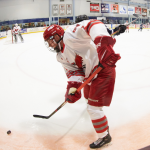