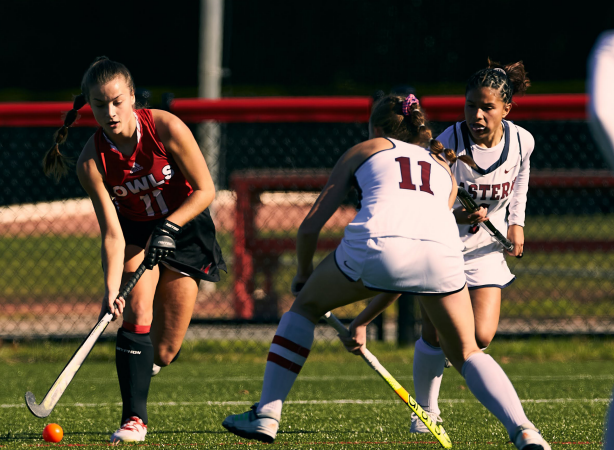 The field hockey team faced off against Eastern Connecticut State University for the LEC finals last weekend. The Warriors started the game off strong, scoring their first goal five minutes into the first quarter. With neither team wanting to give up any goals, both teams had strong defenses. The Owls caught a break when Eastern Connecticut had three players sitting out with green cards, but unfortunetly, they could not capitalize. During this power play for the Owls, first-year Irini Stefanakos (pictured above) passed the ball through to junior Ellie Hunkins, allowing Hunkins to get a shot on net, but the Owls could not get it past Eastern Connecticut State’s goalkeeper Sarah Gallagher. Eastern Connecticut’s goal would be the only goal scored for the remainder of the game. This would allow the Huskies to take the win and capture their first Little East Conference championship. The team finished their season with a record of 12-11 outside of LEC play and 10-2 inside the conference. Stefanakos finished off the season as leading goal scorer with 21 goals, one goal short of the record for most goals scored in a single season. Following closely behind is KSC junior Ellie Hunkins with 20 goals in the season.