Fall sports are coming to a close and for seniors, this is their last season playing with their teams. After four years of playing with the same people and building bonds and relationships with coaches and fellow players, seniors have many things to look back on and even more to miss.

Paige Carey, who has been on the women’s swimming and diving team all four years of her collegiate career reflects on how her time being part of the team has been. Carey explains that it is the most inclusive team she’s ever been part of and that the coaching staff has been the strongest she’s swam under. She also said that the feeling of her swimming career ending hasn’t fully hit her yet, but it is still upsetting.

For Carey, something the team has taught her that will always stick with her is time management. “Definitely time management because we have doubles twice a week, so balancing that and having two classes a day is pretty challenging, especially since I’m working at the lab for the biology program as well, so it’s been definitely having a structure,” said Carey.

As for Tomas Langland who has also been on the men’s swimming and diving team since his first year at Keene State, he feels bittersweet about the end of his swimming career.

“I think it’ll forever be some great memories that I’m going to look back on. It’s taught me a ton of stuff, but at the same time I’m excited to see how this season will play out,” said Langland.

Volleyball player, Brianna Azzinaro, who has been on the team since her second semester of her first year at Keene State said that teamwork is something that will stick with her well after her time at KSC has ended.

“Working together as a team and taking that to my future career and working with others. You need communication on the court and if you don’t have any communication, it’s not gonna work and we wouldn’t be winning games if we didn’t, So, doing that and learning how to do that as a team, especially with new people every year, it’s huge.”

Cross country runner, Cam Giordano has been on the team for five years and explained that he has had a great experience running for the team. He elaborated on how he feels about his season and college athletic career coming to an end. “It’s really sad honestly ‘cause like you’ve been a part of the program for so long and you just don’t know what comes after it because not only is the sport been a part of your life for so long, but the people you’ve met along the way have become very close to you,” said Giordano.

When it comes to what he learned, Giordano explains that teamwork has been something important that he has been able to learn from being on the cross country team.

“Knowing how to work as a team together and stuff like that and like leadership skills. That’s probably the most that I’ve learned from being part of the team.”

A member of the soccer team, Victoria Reynolds liked the fact that since athletes move in earlier than the rest of campus, she already knew people before classes and school started. She says it was nice to see a friendly face on campus.

When talking about her Keene State soccer career wrapping up, Reynolds described how upset she is that her “first love” of soccer is almost over but she is thankful for accomplishing her goals.

“It’s very sad, I’m gonna miss playing with them and playing on the big field under the light. It had been my dream for a while to play in college so I got that goal. I made it. Now it kind of stinks it’s over.”

When Carey, Langland, Giordano and Reynolds were asked for their most memorable athletic moment, they all had something positive to look back on.

“My sophomore year I was put in the mile for the championship, and I never considered myself a distance swimmer, but I won the event so that was a huge confidence booster for my swimming.”

“We do like speeches at the end of the year after our last competition on the bus ride home, I’d say those are always really memorable to do,” Langland said.

“Probably just like the nervousness of when you first come to Keene and you go onto the cross country team or whatever team you’re on. You don’t know what the experience is gonna be like and then you find out pretty quickly that everyone is your friend and you know it just works out,” said Giordano.

“We always do Halloween practice. We dress up for practice and each class has its own theme they choose and it’s a surprise until the day of… that’s always very fun. During preseason we have Death Hill … it’s a very steep nature reserve and you have to run up it. It takes like 5 minutes or something and then go back down and then back up again. This year my roommate actually beat the record time for our team and I remember, we have a male coach who’s pretty young, so he can keep up with us and be a little quicker, but she beat him and that was just a fun memory,” said Reynolds. 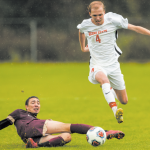 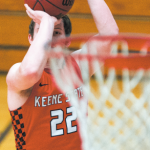