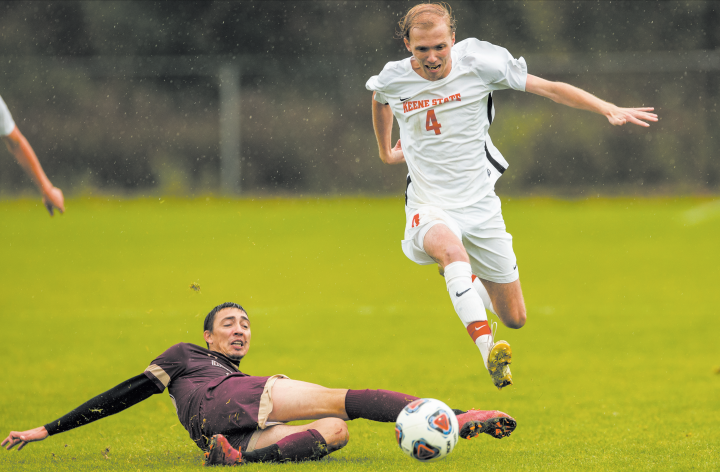 Men’s soccer faced off against Rhode Island College on Senior Day. On Saturday, October 30 the team hosted the Anchorman for the 1 p.m. game that helped honor the 11 seniors on the team. Those seniors include Gavin Fitzpatrick, Glaudi Bangasimbo, Vance Bates (pictured above), Yusufu Juma, Clinton Mungeta, Henry Cummings, Benny Tamzarian, Anthony Pasciuto, Ethan Rose, Nate Howard and Mario Santos. This game ended with a scoreless tie after double over-time and one yellow card was given out to junior Denis Fleming. Earlier this week, the team faced off at home against Worcester State on Wednesday, October 27. Mungeta scored the first goal of the game about 14 minutes into the first half assisted by Fleming. This goal would give the senior his third goal of the season. First-year Michael Mullen would score the second goal of the game off an assist by Bates giving him his first career goal and would bring the Owls up two-nothing. Not only did Bates have an assist, he would also go on to score for the Owls with ten minutes left in the first half, giving the Owls a 3-0 lead over the Lancers. A fourth goal would come not long after, this time it would again be by Mullen, his second goal of the game and of his career off an assist by Santos. The Owls would go on to score once more in the game, this time by first-year Nicholas Dalesio off an assist from Fleming. This final goal would give the Owls a 5-1 win after the Lancers scored only one goal in the second half.