Increasing attendance at the Redfern

The arts are back on the Keene State College campus.

Audiences, though, are not. At least not in the way they were before the pandemic.

Last week, an event at the Thorne Art Gallery was cancelled due to no one attending. In contrast, “Welcome to the White Room” ran in front of an entirely sold out crowd at every performance just over a month ago.

Although in-person event attendance is allowed this year, albeit masked and socially distanced, performance venues on campus are not seeing levels of attendance return to preCOVID numbers.

At this semester’s performances so far, there has been an average attendance of 43 people, according to Redfern Arts Center box office records. These numbers include events from September 24 through November 7, 2021. These events, with the exception of “Welcome to the White Room,” took place in venues with a 100-person capacity limit.

In the Fall 2019 semester, Redfern events saw an average of 143 people attending, according to box office records.

This difference in attendance is likely caused, at least in part, by COVID-19, which put inperson performances on hold for a year.

When performances were allowed to return on campus last fall, they were largely restricted to livestream-only. Theater and dance department chair Kirstin O’Brien said the expectation of a livestream-only policy could be impacting in-person attendance.

“Maybe people have also gotten into the habit of ‘Oh, it’s probably just going to be live streamed.’ It’s been our culture for over a year,” O’Brien said.

O’Brien continued, “I think honestly, it’s just a matter of when people are going to say, ‘You know what, it is safe. They wouldn’t be offering this if it wasn’t.’”

Music senior Hattie Skvorak does not view the livestream option as detrimental to inperson attendance numbers, however. Skvorak said there is a “silver lining” to the livestream option, as it makes Redfern events more accessible than before the pandemic and broadens their reach.

“It allows us to connect with people that might not be able to come onto campus and join us for in person events, whether that be for health reasons, or for travel proximity reasons, if they live out of state or anything like that but still want to join us, the livestream really picks up there and helps us a lot with that,” Skvorak said.

Music department chair Sandra Howard shared similar thoughts about the accessibility of the livestream, “It’s not uncommon for us to have audience members viewing across the country and internationally. If it was just in person alone, we wouldn’t have that kind of visibility.”

Redfern and other arts events on campus are advertised through social media, the Keene State and Redfern Arts Center event pages, as well as physical posters hung up around campus.

Part of boosting event attendance and awareness among the Keene community, O’Brien said, could be through increased advertising, specifically about the option to attend in-person.

“It’s been a year and a half, almost two years. And the expectation of certain people might be ‘Oh, it’s probably just going to be livestreamed.’ We’re really maybe focusing on, we want you to come, we are being safe, come see what our students have been doing,” O’Brien said.

The Redfern Arts Center also lost its marketing director going into the Fall 2021 semester. As a result, the position was not “renewed,” meaning there is no one distinctly responsible for marketing events at the Redfern. This caused the job of marketing to fall onto the various arts faculty.

“Of course, we’re going to be talking about our events anyway, but we don’t have the marketing skills. We don’t have a marketing budget. We don’t have someone to support us in those ways to create materials and spread the word,” Howard said.

Attendance has grown over the course of this semester. The first Redfern event of the season had an audience of 29 people, the Concert Band performance on November 4 had 87 people in attendance, almost rounding out the venue capacity. The Apple Hill String Quartet performance on October 22 reached full capacity.

Howard encouraged students and community members who are able to attend events in-person. “That human connection person to person, you can’t replicate that with an online experience,” Howard said. 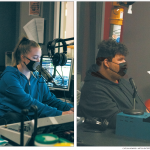 Dynamic Duo Previous
Four years in the making Next 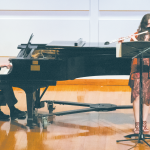