History in the making

First-year Aaron Turgeon is the first male swimmer in Keene State history to receive a Little East Conference award, winning two of them for the week of November 1.

The Ludlow, Massachusetts, native got his start in swimming at a recreational pool at a local boys and girls club. Like any athlete, Turgeon has had some trouble throughout his athletic career. “I haven’t had setbacks [per se], I’d call them more like ‘walls’, where what was working just wasn’t anymore, and I would have to find something new,” he said about experiencing tough times in his training.

Turgeon came into the swim and dive team at Keene State with this mindset, “I didn’t know what to think of it, so I just went in with no expectations.” His goals are what motivates him, but he said he’s not sure what those are just yet, as he’s just getting started in his career for the Owls.

Men’s swimming and diving head coach Chris Woolridge said that Turgeon, like all first-year athletes, had to take a moment to get used to the new environment. “I think, like a lot of [first-years], it took him a little bit of time to get his feet underneath him, but now that we’re in our eighth week, he’s off and running,” he said.

“He kind of quietly gets the work done at a really high level… He was a pretty good swimmer coming in, but he really hasn’t even matched what he’s capable of yet…” said Woolridge.

Men’s swimming and diving team captain, senior Tyler Young, said that Turgeon is a welcome addition to the team. “As a [firstyear], he definitely has a lot of spirit and a lot of potential in the pool, and I think he’s a very sociable person, and he’s already shown a lot of dedication to this program,” he said.

When asked about Turgeon’s work ethic, Young said, “Our coach talks about ‘You can be there at practice, but if you really want to get better you have to put in a little bit extra rather than just going through the motions’, so I think it’s that even when the coach isn’t looking, it’s putting in that 110 percent.”

At times, Turgeon reminds Young of a younger version of himself. “I remember coming into Keene definitely just open to possibilities and willing to work my butt off to get where I need to be; especially as a [firstyear] too, I was more concerned with just contributing to the team and giving back, and I think I see a lot of that in him. He wants to perform and he wants to help the team in the best way possible,” said Young.

According to Young, one word that would describe Turgeon and his first-year teammates is ‘fresh’, according to Young. “I think he’s what this program needs, as well as his other classmates in his grade. And I think in the next coming years, and I wish I would be here to see it, I think the work ethic that they have is fresh for this program and will continue to develop in the next coming years,” Young added.

When it comes to goals for Turgeon to find motivation in, Young has some suggestions. “I think as a freshman, the biggest thing I would like to see him succeed in is definitely dropping some time in his events, but also just having fun. I think, especially your first year, if you don’t have that positive energy at practice it’s going to be really hard to continue for another three years. So I say being satisfied with himself and being proud of himself would be a great first goal.”

Phil Racicot, Director of Athletics and Recreation at Keene State and Chair of the Little East Conference Athletic Directors Council Executive Committee, said, “Aaron is certainly off to a great start to his Owl career. It’s great to see that his efforts are being recognized. His talent, training, and dedication represent us very well. Our swimming programs have traditionally been very strong and Coach Woolridge looks to be adding to that legacy with this group. I’m looking forward to an excellent season and plenty of accomplishments from Aaron and all of his teammates.”

If Turgeon could give any advice to future incoming athletes, he would say, “Let failure be a reason to keep going.”

0Shares
0 0
What does Thanksgiving mean for athletes? Previous
Goodbye ‘Toe’ Next 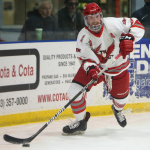