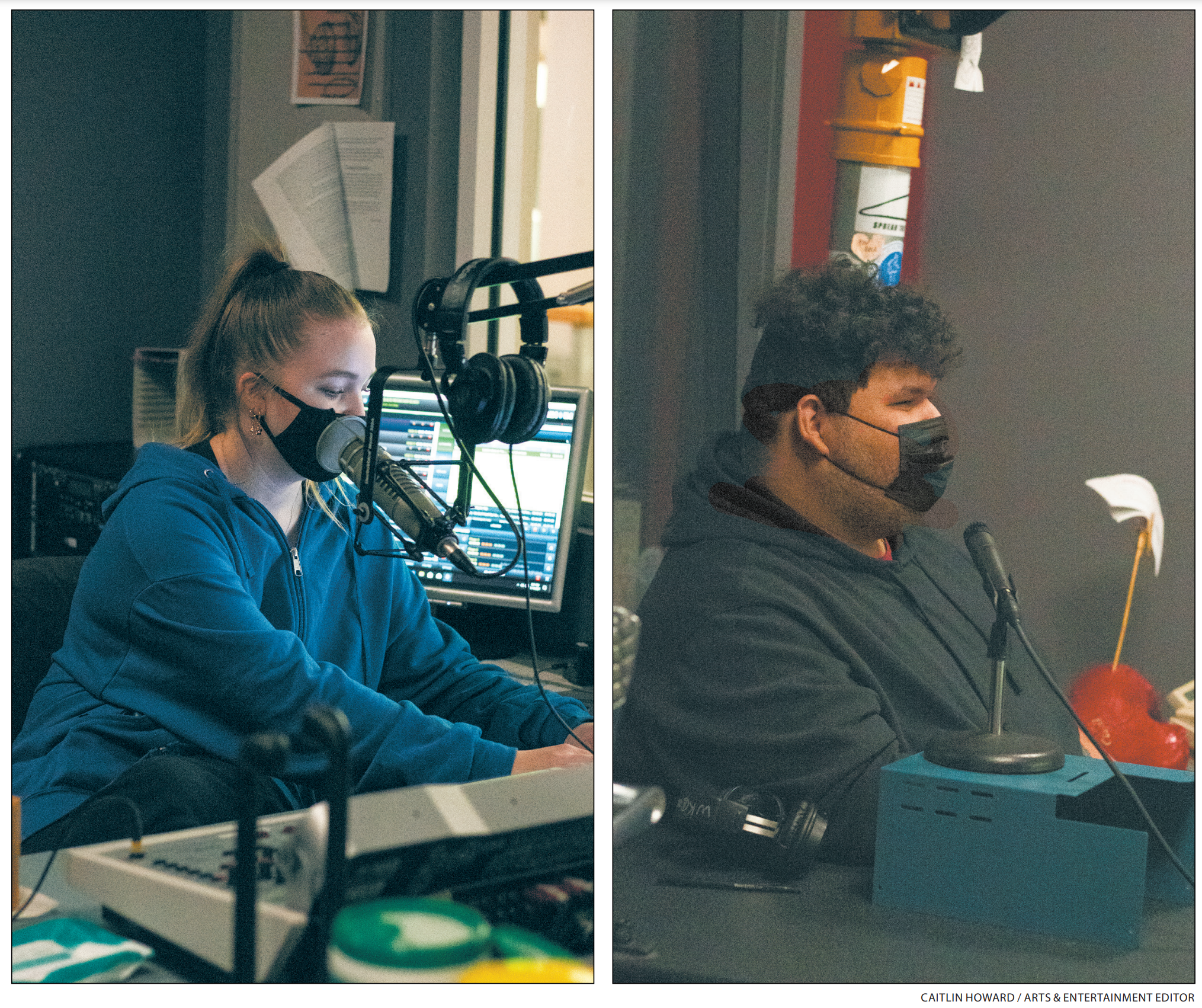 Real Radio co-hosts Ava Pittman (left) and Joshua O’Neill during one of their live broadcasts inside the WKNH studio.

Real Radio has been described as a WKNH “success story.”

Their show has been drawing in more listeners each week, becoming one of WKNH’s most listened to shows. WKNH General Manager Cole Rinker said Real Radio is starting a new “age” of WKNH. “They’re bringing a new perspective when it comes to how they define college radio and that experience,” Rinker said.

O’Neill came to Keene State knowing that he wanted to be involved with college radio. When he met Pittman, he asked her to join as co-host on what would become Real Radio. The show developed from there.

As they were considering the type of show they wanted to create, O’Neill said, “We were kind of thinking ‘Ellen,’ but dial back the daytime.”

Since Real Radio goes on air on Thursday from 9 p.m. to 11 p.m., the restrictions regarding explicit content are lessened. According to the Federal Communications Commission (FCC) broadcasting rules, between the hours of 10 p.m. and 6 a.m., any content considered ‘indecent’ is free to be said. This does not include profanities, but this allows O’Neill and Pittman the freedom to be more candid in their broadcasts. For the first hour, the two play music and chat, and transition to more candid conversation for the last two hours.

“We talk about our lives [and] what’s going on,” Pittman said.

Each broadcast is loosely planned, if at all. Instead of a strict structure, the show is based around natural conversation between the two co-hosts. “We go into every show with no expectations, and we just sit down and go and it always works,” Pittman said.

With a laugh, O’Neill added, “Sometimes we have a list of things, but usually we don’t look at it.”

After passing the DJ exam, every show needs to be shadowed by an executive member of WKNH. Rinker observed the first Real Radio broadcast, and said it was a “hoot.”

“I have never had more of an adrenaline rush for a radio show. It was upbeat for a Thursday night, and it was a much needed bucket of laughs,” Rinker said.

In addition to a talk show format, the duo selects music to play in each show. They also take song requests from listeners through interactive polls and call or text. Eventually, the duo wants to branch out and invite guests onto the show.

Real Radio is relatively new to the WKNH community, as O’Neill and Pittman are both first-year students. However, they noted already seeing success in doing the show so far. Fans of the show will sometimes come up to the studio window and interact with the hosts as they do the show.

“Our friends and our fans will come up and talk and be dancing outside,” Pittman said.

For both, doing Real Radio has helped boost self-confidence. “It’s definitely helped me come out of my shell,” Pittman said.

Rinker described O’Neill and Pittman as a “dynamic duo,” both inside and outside the station. “I just know that they’re a cornerstone of the future of WKNH, they’re gonna set the way for the next 50 years,” Rinker said.

Real Radio goes live on Wednesdays from 9-10 p.m. and Thursdays from 9-11 p.m., available to be listened to on the Tune In app.