Adapting for the screen: ‘Dune’

The film adaptation of Frank Herbert’s scifi epic, “Dune”, arrived in theaters on October 22. Directed by Denis Villeneuve (“Arrival”, “Blade Runner 2049”), the film has done what many critics have called an impossible task by faithfully and successfully adapting the dense source material of Herbert’s original novel. While a “Dune” film directed by David Lynch already exists, it was a critical and financial failure, and took many creative liberties with the source. Villeneuve’s adaptation is far more faithful, with only a few minor changes.

Despite the monumental task of introducing casual moviegoers to the complexities of Herbert’s world, Villeneuve has found ways to keep the film engaging while delivering exposition, and uses the age-old rule of “show don’t tell” as often as possible. This being said, “Dune” is not a fast paced film, and those expecting an exciting sci-fi adventure in the vein of “Star Wars” should be ready for a more slow-burning, introspective experience. The first half of the film is largely made up of exposition and building tension; the story moves fairly slowly for almost an hour before the action begins to pick up.

Luckily, a slower pace allows director Denis Villeneuve and his creative team to show off their filmmaking chops. There isn’t a shot in this film that isn’t an absolute joy to behold; cold grey and orange lighting distinguishes between the various locations, and a constantly moving camera obsessed with extreme close and longshots make it hard to look away. A frequent shifting focus of the lens gives the world a foreign, alien feel, and an otherworldly, middle-eastern inspired score by Hans Zimmer booms across the sandy plains of Arrakis drawing out the epic scope of the story.

When the action begins around the midpoint of the film, it is jaw-dropping. The quick cuts and shaky camera of modern action films are replaced with steady, sweeping longshots that linger on their subjects. The back and forth between close and long shots accentuates the scale of the ships and buildings, and the sound design of each machine and weapon feels equally fantastical and viscerally present. Although the film is rated PG-13, the battle sequences are destructive and brutal, and each scene of action has its own distinct location and threat which keeps the tension high and the audience on the edge of their seat.

It’s no surprise that the all-star cast of “Dune” is without fault. The film stars Timothee Chalamet, Rebecca Ferguson, Oscar Isaac, Zendaya, Jason Mamoa, Javier Bardem, Josh Brolin, Stellan Skarsgard, and Dave Bautista, all of whom deliver Shakespearean performances that fit perfectly into the cold formality that Herbert penned into his characters. Timothee Chalamet and Rebecca Ferguson are at the center of the film as Paul Atreides and his mother, the Lady Jessica, and both do an excellent job bringing new depth and complexities to their characters while keeping the spirit of their characterization from the novel. “Dune” is only the first part of a larger story, and it’s ending leaves very few things resolved. Audiences should be prepared to leave the theater wondering what will happen next with the knowledge that a sequel won’t be coming until 2023. Despite forcing eager audiences to wait for a resolution, splitting the film into two or more parts was the right choice; the novel is simply too dense to cram into one film, and taking the time to tell the story completely is vital to faithfully retell Herbert’s story. 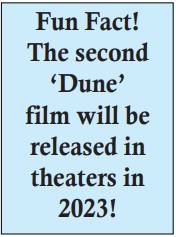 “Dune” is a movie that anyone can enjoy. It is full of excellent performances, beautiful cinematography, great music, costumes, sets, and action that puts most modern blockbusters to shame. It is faithful enough to excite longtime fans of the original series while containing enough exposition to not alienate first time viewers.

Villeneuve has proven that in the right hands, even a book as monumental and vast in scope as “Dune” can be adapted to the screen. 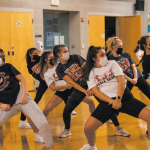 Stepping closer to nationals Previous
A new perspective of dance Next 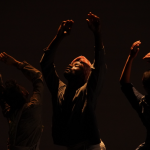