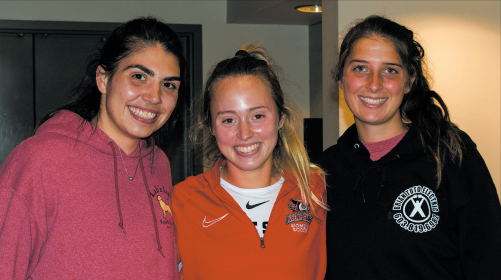 Having teammates means having friends for life.

When it comes to sports, most people think it’s all work and no play. However, when it comes down to it, there’s no one these athletes would rather spend time with both on and off the field.

Spear said she had no intentions to play soccer at the collegiate level. She had played club soccer her senior year of high school and said she didn’t feel qualified enough to play in college. However, once she got to Keene State, she realized that something was missing.

“I didn’t play soccer my senior year of high school or my [first] year of college…but I missed the team dynamic and having people that have my back, and I reached out to [retired Head] Coach [Denise] Lyons. Coach Lyons is a great person and just getting to know her, getting to know the team, I knew that it was the right fit and I joined,” said Spear.

Kennedy said she had no intentions to come to Keene State at all. She said she had been looking to play at a school that was further away from her home state of Massachusetts. Once she came to Admitted Students Day, she was sold. She said she had met with the Head Coach at the time, Lyons, and another member of the coaching staff, now Head Women’s Soccer Coach, Sarah Testo. When looking back on that meeting, Kennedy said this about her decision to come play for Keene State and Coach Lyons, “It wasn’t just about soccer, it was more about life. [Coach Lyons] treated me like I wasn’t just a player, I was also a person.”

Terrinca had many offers to consider when choosing a school to play soccer for. Again, Coach Lyons was the cherry on top of this sundae. “The thing for me that really stood out for Keene and this program, as opposed to other schools, was the coach at the time, Coach Lyons, who actually just retired this past year. She was just an amazing person and when I had met her on my overnight, I really felt like she cared about me a lot as a person and not just an athlete, which you don’t really see from many coaches, especially at the college level…I’ve definitely worked best with coaches I feel like I can have that relationship with.”

For Spear, the thought of coming into the soccer team was intimidating. “I never saw them talk to anyone else besides the soccer team, so going into it I was a little intimidated because I didn’t know how my old roommates were going to like that I was friends with new girls. I was skeptical of it but then I joined the team, and it seemed…welcoming. They weren’t as cult-y as I thought.”

Spear, Terrinca, and Kennedy live together as well as play together.

When asked if they ever get sick of each other, Kennedy replied, “Oh 100%, sorry!”

“Some conversations can get very repetitive…so I have to walk away,” said Spear.

Living together and playing together can mean seeing the same faces repeatedly. Spear said, “My [first] year and sophomore year I didn’t live with soccer girls, and it’s definitely a different dynamic… Living with soccer girls makes it a lot easier, and yes you’re always together which makes you get sick of each other, but at the same time you’re on the same schedule so it’s easier to have the down time that you need.”

Part of life is that friends have disagreements. How that’s handled when living together and playing a sport together can look different than how one may handle that in a different scenario.

“That’s what’s nice about living with soccer people, you can vent about what happened at soccer practice but then five minutes later you’re just over it,” said Kennedy.

These athletes drill in the idea that no grudges should be held, and nothing should be taken personally when taking things from on the field off the field, and vice versa.

“I screamed and swore at Alex [Kennedy] in the middle of a game, but did we take that off the field as friends?… Something that happens on the field is not to be taken personally or brought home… That was a scenario of me speaking to [Alex] as a soccer player, not as my friend and roommate,” said Terrinca.

Athletes have a rigorous schedule and demanding responsibilities, but at the core they are people with social relationships. Athletes having relationships with athletes on different teams and non-athletes can be a bit difficult to manage in season, they said.

“I really think the only time that I see my friends outside of sports is if I’m going out or something…because I’m in class majority of the time, and then when I’m not in class all I want to do is lay in bed and watch TV because it’s just constant going, going, going and you never really get a rest, and when you do you really take that advantage,” said Kennedy.

“Finding time to just make plans with your friends in season is so hard as it is and especially hard if they also have a lot of other obligations on their plate, so I don’t really see a lot of my friends who are on other sports teams or in sororities or things like that this time of year because it’s a busy time for everybody,” said Terrinca.

They said that having that balance of athlete and non-athlete relationships is important for them.

“I feel like you need to have the balance between the two because I have a friend who’s not a student athlete and I can go to her about anything because she’s on the outside of the team. If it’s a conflict, she can tell me whether I’m wrong or whether I’m right without any bias. So, it’s having that balance of ‘Yes, I can talk to Alex [Kennedy], yes, I can talk to Abbie [Terrinca]’, but they’re involved in the team, so they don’t want to pick sides. She’ll tell me what’s right and what’s wrong,” said Spear.

Athletes are college students first, and while they may be devoted to their sport, they also form relationships. These three athletes are all in romantic relationships with members and former members of Keene State’s men’s soccer team. While they all play the same sport, there can be hardships to work through, but, more than anything, these men support these women and their goals.

Spear’s partner was a member of the soccer team, but no longer is. “When he was an athlete, we were pretty much on the same schedule, had practice at the same time, class relatively at the same time, games relatively on the same days, so it was easier to see each other because we had a similar schedule and it never really got in the way of anything. And, as a non-athlete, it’s a little different because I’m the busy one but he’s so lenient that he doesn’t care, so it’s nice not to have that pressure.”

While her partner may no longer be on the team, he still has knowledge to share with her. “At first when he would critique me, I didn’t want to hear it at all. But now, he knows so much about the sport, I go to him for everything because he’s so smart when it comes to it… It’s nice to have that in a relationship, where you play the same sport, because you can learn from each other,” she said.

Kennedy’s partner is a co-captain on the men’s soccer team. She discussed that it can be beneficial that they are both in that role on their respective teams. “He has the same responsibilities as me which is nice…it’s a constant ‘when he’s free, I’m free’, it’s a constant balance. He’s also a captain so he also deals with a lot of stuff that I have to deal with so I can go to him and get advice from him about how he would deal with the situation… It’s better to talk to someone who’s in that same boat as you,” she said.

Terrinca said this about her relationship with her partner, also a member of the men’s soccer team, “… I think that playing a sport is a lot on both people and it’s a lot on both of us and we deal with it in different ways. It’s learning how people react to stress and things not going your way…we’ve just kind of learned to figure out each other and what we need from each other to support one another.”

Again, Spear candidly summed it up, saying, “It’s respecting each other with your similarities and differences.”

While as teammates they were close, they said they have grown a lot closer in the past year. “I was friendly with [Alex and Rachel] and they were my teammates, but I think living with them and having mutual friends definitely made me grow a lot closer,” said Terrinca.

Spear said she has them and the soccer team to thank for keeping her at Keene State. “That’s where the balance comes from. If I didn’t have the soccer team, and I wasn’t getting along with my roommates, I would’ve had no one, I probably would’ve transferred.”

Spear, Kennedy, and Terrinca commented for this article together. 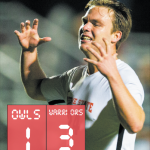