Sidelined for the season

Most student-athletes would describe being injured as “hard” as they are not able to engage in the sport they love.

This season, many of the athletes didn’t compete last year due to COVID-19 so they are coming back from, potentially, as much as a two-year break. Finally, being able to come back from the hiatus and getting injured delays their full return to sports even longer.

For senior diver Brianna Feldman, her return to the diving board has been long awaited, however, due to an injury, it looks like it may not happen at all. Feldman explained that she has not had a full season of competition since the first semester of her first year at Keene State. “So freshman year, I had a full first semester, sophomore year I hurt my foot so I was in a boot the whole season and then junior year I did first semester and then left for military training. Now I’m injured again for senior year.”

Unlike Feldman, some athletes are able to recover and come back to their season. Senior captain of the women’s soccer team Alex Kennedy had a short stint away from games after pulling her hamstring early on this season. Though Kennedy only missed three games, she said it was difficult getting back into game mode. “It was different because when you play a lot, like every game or even step foot into a game, you get that experience so when you miss that you get out of game shape kind of quickly because you are not playing or doing anything that helps you get back into it… After the first sprint, I was hunched over, but you just tell yourself you can do it and you’re fine.”

Injuries can sideline athletes for varying amounts of time depending on the severity and location. Sophomore libero Reagan Fleming was in her fifth game with the women’s volleyball team when she suffered a “boxer’s fracture” while diving for a ball. This was on Sept. 18 and it put Fleming out for six to eight weeks. Fleming described her struggle of trying to push through the healing time. “It has been hard. It’s hard to stay positive, but my coach and my team are trying to motivate me and I keep working out hoping that I can come back in the future and towards the end of the season so I’m just trying to stay positive.”

Kennedy also described the difficulty of being on the sidelines, unable to play even when it feels like she could help her team out. However, her coaches made clear that healing is more important than winning. “It was hard. It was really hard [watching the team play from the side.] There was one point where I would warm up just to get motivated and stuff and I had everything on, like my tape, then we would be losing and I felt like I wish I could step in. I went up to my coach and I was like, ‘Just put me in, just put me in,’ and he was like ‘We are not wasting you, you need to rest.’ It was hard.”

While Kennedy has returned to gameplay and Fleming has hope of returning this season, Feldman admitted that her diving career is likely over when she graduates in December. “Sports are kind of over for me when I graduate. I probably won’t dive in the future because my body is so old and worn down and it’s not worth putting myself through that at this point.”

Injuries can make or break an athlete’s time at Keene State. For some, they return and play multiple seasons after, but for others, it takes them away from their sport permanently. “It drives me insane because I can’t compete…I’m not doing what I love and it has been since freshman year that I actually dived. It feels like I came here and got injured and haven’t been able to go back since.” 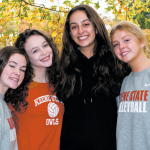