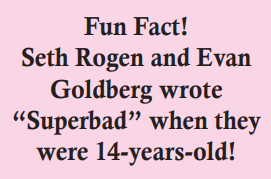 In the film, Hill and Cera play Seth and Evan, who are seniors in high school. The plot follows them as they go on a journey to a party with the hopes of losing their virginity. The rest of the film is the mishaps experienced, and the valuable things they learn from the day.

There are problematic aspects of this film. Many swears that are said throughout would not pass today on film. This film was made in 2007, and back then films with R ratings frequently contained curse words. However, it is important to acknowledge that a few of these curse words are deplorable. Seth’s plan of how to have sex is wrong. The plan is getting him and another person drunk (he thinks this is the only way anyone will have sex with him). The plan isn’t justified by the fact that they are drunk as Seth says. The movie doesn’t advocate for Seth’s mindset, but it’s still problematic.

Despite the nature of many plot points, it is still a great film. The comedy, while raunchy at times, is spot on. It ranges from raunchy jokes to others like teens getting fake IDs.

There is hardly a moment in this film where something does not go wrong. The best way to create comedic situations is to have as much tension as possible. If the characters are in out of control situations, the better chance the film has of gaining energy.

While the majority of “Superbad” is gross-out humor, this should not distract from this film having a deeper meaning and a heart at its center. The fact that so many things go wrong on this day for the two characters is a way to warn people that making sex this important puts unnecessary pressure on individuals, making them look like jerks.

The heart of this film is Seth and Evan’s friendship. Rogen and Goldberg named these characters after themselves, these characters are based off of their friendship. Even when these two have a fight they always make up. The film is realistic about them going to different colleges. The friendship will not be the same, still strong, but different due to distance. If you’re close enough friends though, everything works out provided the friendship evolves.

“Superbad” is not a perfect film. However, this doesn’t take away from the amazing comedy the film is. The humor is balanced and the comedic mishaps hardly break leading to a film with plenty of hilarious energy. The film has an excellent message reminding us of the importance of not making sex a priority. “Superbad” is a fun and heartfelt film with Jonah Hill and Michael Cera giving career best performances. Mintz-Plasse, Rogen and Hader give never ending supplies of laughs. Check this film out and see all the hilarity you’ve been missing! 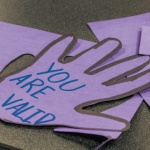