The Keene Pumpkin Festival has been hosted in Keene since 1991 but plans to host in recent years have been changing.

Keene Pumpkin Fest has been postponed to 2022. In a Facebook post made on their official page, the organization said, “The plan was (and still is) to take a year to get all our ducks (or pumpkins) in a row, and come back with a well-organized, fun, and safe festival in 2022.” The postponed festival, with a pandemic still at the forefront of the new board members’ minds, will allow them to get organized for future festivals since the event takes “10+ months of planning” and the new board has only been active since June 2021. City Manager Elizabeth A. Dragon said in an email, “In regards to the future of the festival, we haven’t been contacted by the organizers to discuss their future plans.”

The 2020 Pumpkin Festival was “self-managed” by the community. The board, in charge of organizing the festival, made a statement encouraging businesses, schools and citizens to pose their carved pumpkins in front of their locations. With COVID-19 at large in 2020, they saw it best to continue the festival tradition that way and their official website stated they “had put forward a much smaller scaled plan that [they] felt could keep the community safe…” With that, they still went forward with the community managed festival.

The festival has been working to maintain its bounceback after the events that occurred the same day as the festival in 2014. In summary, the festival was hosting thousands of attendees when mobs of college students and young people swarmed the streets of Keene, causing major destruction. The city saw broken glass, kicked and torn down road signs, a large fire, and flipped a car. Riot lines were formed to maintain the damage. An article from the Keene Sentinel stated that dozens of people involved in the event were arrested and charged with disorderly conduct and various other charges.

Although the riots didn’t reach the festival goers, the festival name was connected to the event. With no guaranteed security at the festival, the organizers were forced to relocate the Pumpkin Fest to Laconia, NH. The 2015 and 2016 Pumpkin Festivals were in Laconia, but were brought back to its home city in 2017 with plans to stay there. Keene and Laconia now host their own versions of the Pumpkin Festival and will both resume the annual tradition in 2022. 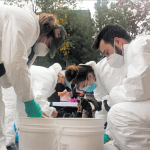 Auditing the waste Previous
Revisiting the mission Next