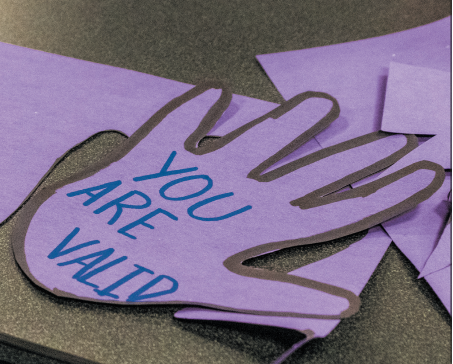 On Halloween 1969, protestors were doused in purple ink outside the office of the San Francisco Examiner.

The crowd was protesting an article that had come out five days prior in the San Francisco Examiner that used offensive language towards the LGBTQ+ community. However, after being doused in ink, the protestors left handprints on the wall of the building as a demonstration of their presence. This day became known as Friday of the Purple Hand.

First-year Emilia Toth said, “Something really horrible happened to this big community that just wanted to be accepted, but they immediately turned that around and made it a symbol of their power, and I think that’s really important.”

Members of KSC Pride gathered in the Madison Street Lounge on October 17 to commemorate the anniversary of this event. Students made cut-outs of their hands on purple paper and, on the paper, wrote positive affirmations surrounding the LGBTQ+ community. These handprints will be hung up around campus next week in accordance with the anniversary date.

First-year Bec Bloomberg said, “We’re taking this and turning it into a sense of empowerment around campus.”

KSC Pride has held a commemorative event for Friday of the Purple Hand for the past two years. The on-campus event was not only to remember the anniversary, but also to bring awareness to LGBTQ+ history as a whole.

“I hope that it gets done in future years, too. I think it’s super important because there isn’t a whole lot of education about LGBTQ+ history, even though we have LGBTQ+ History Month. There’s not a lot of education about the different days and holidays, especially not in schools,” President of KSC Pride Gretchen Moore said.

Friday of the Purple Hand took place four months after the riots at the Stonewall Inn, which is seen as the catalyst for the modern-day LGBTQ+ movement. Coordinator of LGBTQ+ Student Support Hunter Kirschner said all of these events are important pieces in telling the story of the movement as a whole.

“I think each of these pieces, among a lot of others that I haven’t even mentioned, that I’m not aware of either, tell this very complex and broad story of how we’re able to come to this moment right now,” Kirschner said.

Sophomore Zach Keenan shared similar views, “I think it’s important for us to be educated about our history because we have so much more work to do, but it’s nice to look back and be like ‘wow, look at the work we’ve done.’”

Kirschner emphasized the importance of teaching LGBTQ+ history through events like this. “I think that it helps in terms of the movement and for me personally, looking to the past to shine a light on our way forward. And taking inspiration from the work that’s already happened and translating it to the time and place we’re in now,” Kirschner said. 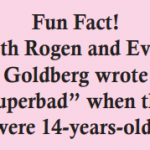 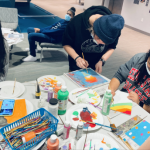